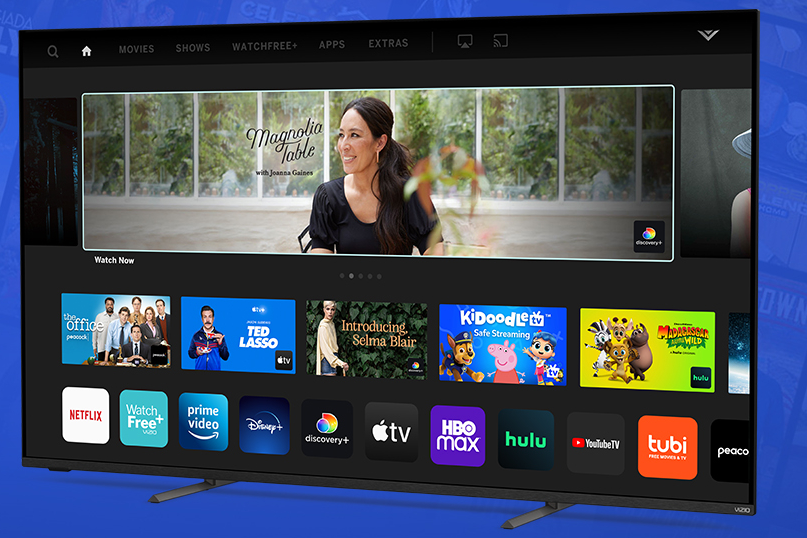 As part of the launch, Vizio is showcasing a dedicated Discovery+ link on the SmartCast home screen. The carousel, “Discover More on Discovery+,” will showcase the variety and volume of the content portfolio and introduce users to the “best-of Discovery+” with the platform’s top shows.

The Discovery+ service is available for a $4.99 per month with a seven-day trial, or a commercial-free option for $6.99 per month.

Currently, Discovery+ subs will find holiday-themed programming from franchises such as True Crime series “Fruitcake Fraud” and “The Pioneer Woman’s Hometown: Holiday Themes,” in addition to new series such as “Discovering David Dobrik,” “Drew’s Dream Car with Drew Scott and Ant Anstead,” “My Dream Kitchen with Giada de Laurentiis and Carla Hall,” and a new season of “Hometown: Ben’s Workshop.”

“The addition of Discovery+ on the SmartCast home screen means audiences can dive into a deep catalog of content and instantly stream some of the most popular shows on television,” Katherine Pond, VP of business development at Vizio, said in a statement.

“This new partnership allows us to expand the reach of all of Discovery’s digital properties to even more of our dedicated viewers,” Sauerhoff said.

Separately, discovery+ is also now available on Roku streaming devices and branded Roku TVs in the U.K. and Ireland.

“We are always looking to bring the best possible entertainment selection to our customers, and are excited about the wide variety of entertainment that discovery+ offers Roku users,” said Yulia Poltorak, director of content distribution at Roku.

Discovery+, which launched in January, will end the year with more than 15 million paid subscribers.