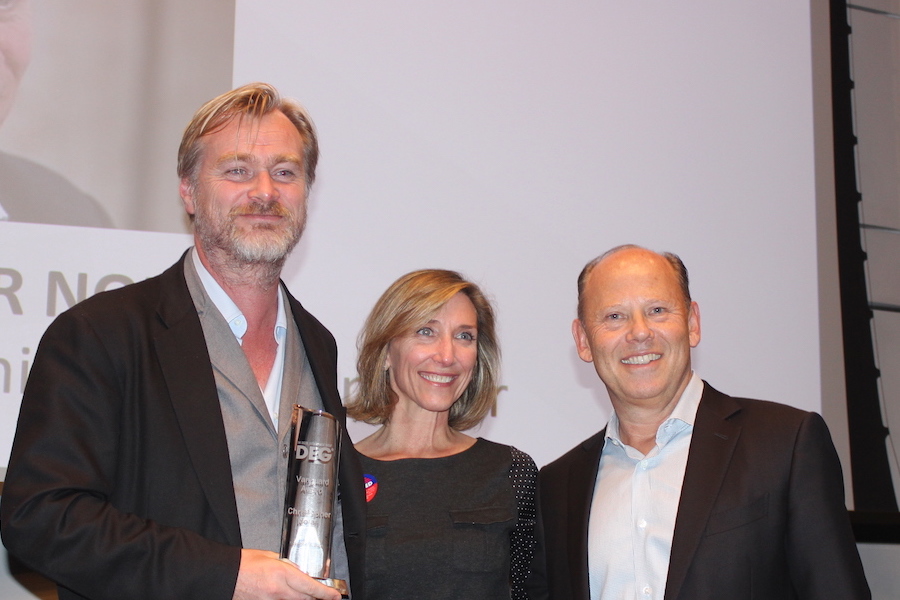 The event was produced by DEG: The Digital Entertainment Group and the UHD Alliance (photo gallery).

“For those of you who’ve been fortunate enough to collaborate with Chris, you know that whatever project he is involved with he doesn’t take it on unless he is fully committed — and I mean all in,” Sanders said. “The good news for all of us in this room is that Chris immediately got the potential for 4K.”

The DEG Vanguard Award is in recognition of Nolan’s place at the forefront of filmmakers using groundbreaking technology to deliver increased scale and resolution, enhanced color and immersive audio to film audiences both in cinemas and in the home theater environment.  The director, writer and producer most recently earned dual Academy Award nominations, for Best Director and Best Picture, for Dunkirk, which in July 2017 received the largest 70mm release in the last quarter century. His filmography also includes Interstellar, Inception, “The Dark Knight Trilogy,” The Prestige, and Memento, for which he received his first Oscar nomination, for Best Original Screenplay. With the December 2017 release of the seven film “The Christopher Nolan Collection” on 4K Ultra HD Blu-ray by Warner Bros., Nolan became the filmmaker with the largest number of films available in the most advanced home-based viewing format, according to the DEG.

Sanders noted the director’s commitment to preparing his films and Stanley Kubrick’s 2001: A Space Odyssey for the new format.

“He agreed to oversee the remastering of his entire film library for 4K,” Sanders said. “It took months and months out of his schedule. It was during the release of Dunkirk, by the way. But he was really determined to deliver the best of what our format offers to consumers in the home, and as a result I think he’s become the world’s foremost filmmaking expert on 4K and how to use the technology to present films for the home screen.”

Nolan has been a longtime advocate of the best home viewing experience available to consumers.

“It really puts us in a position where we can get closer and closer to a theatrical print in the home,” Nolan said of 4K UHD with HDR.

He also said he was a “big fan of the 4K disc because it removes the uncertainties of streaming.”

“It’s fantastic for the filmmaker to have a physical media that eliminates the variabilities, the compression and so forth,” he said. “That’s the gold standard that streaming is going to have to reach.”

He noted his generation of filmmakers came up with access to home video, which informed their art.

“I’m really part of the first generation of filmmakers who grew up with home video in the form that we know today, starting with VHS, and the idea that you could have access to a film and you could go back and look at different parts of it and have a different kind of relationship with it,” Nolan said.

He said home video affected his filmmaking on several levels.

“My generation of filmmakers, who were starting out just as DVD was becoming the dominant format, I think were very influenced by our relationship with that new way of looking at films with chapter selection and random access,” he said. “I think we started thinking of films and owning films more like books in a way. I don’t think it’s a coincidence that a lot of us at the time, myself included, started exploring various different narrative structures. I think the things are very related. I think my experience with home video has always informed my filming both narratively and technically.”

“Thank you to all of you for all the great work you do in positioning filmmakers like myself to be able to present our work to wider and wider audiences,” he said.

The 4K Ultra HD Summit focused on advancements in 4K UHD technology, increasing affordability of the technology, and widening availability of content.

“It’s about the splendors of the UHD format and what it does in delivering an experience to consumers that is beyond anything that they’ve experienced prior to this point in time,” said Michael Fidler, president of the UHD Alliance, in opening the inaugural summit.

“We’re really excited and bullish about 4K, the full 4K ecosystem, the TVs, the device players, the discs and of course the digital 4K movies as well,” said Amy Jo Smith, president and CEO of the DEG.

“4K UHD has really transformed the home viewing experience and clearly consumers are getting it,” said Bob Buchi, president, worldwide, Paramount Home Media Distribution. “Product sales are up 87% in comparison to the first three quarters of last year. There are now 42 million homes with a 4K UHD television, and in terms of content, there are now 392 titles available on Ultra HD Blu-ray Disc and 595 titles available on digital, so the numbers keep growing and for good reason.”

Buchi said Paramount, along with the other studios, is “really expanding the number of films from our library available on 4K UHD with HDR, including in our case, all of the films from the ‘Mission Impossible’ franchise.”

“I can tell you, hands down, the best way to see it is on 4K will all of the bells and whistles,” he said.

“We’ve been using 4K to scan classic titles in our library for archival purposes,” he said. “In fact, Paramount has preserved over 1,000 films in 4K.”

That includes such classics as Grease, Nashville, Chinatown, To Catch a Thief and the original War of the Worlds, he said.

“I think the detail, the color and the light that the filmmakers left us from the original film elements have never been more vivid, and the creative genius from these filmmakers is really coming through,” Buchi said.

He said the 4K edition of Frank Capra’s It’s a Wonderful Life shows the Oscar-winning snow effect, an innovation from more than 70 years ago, “with greater detail and sharpness thanks to the innovation of 4K.”

“The success of the format really helps us deliver the content that better represents each filmmaker’s original vision,” he said.

Citing Nolan’s contribution to 4K UHD, Buchi said, “We worked with him on Interstellar, and I can tell you there’s no one who’s been a bigger and better champion for optimizing the home viewing experience.”