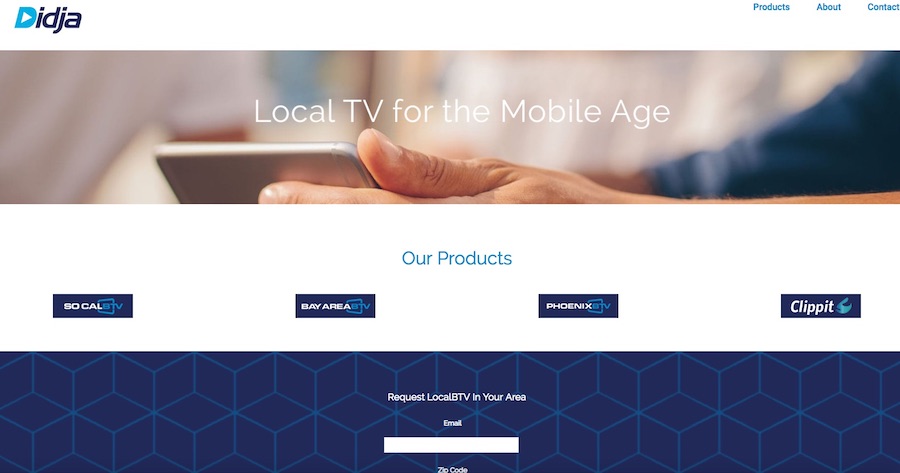 The Apple TV and Fire TV versions are available now in the app stores, with Roku to follow soon after, according to the company.

LocalBTV is available as a pilot service in the Los Angeles and Orange County area (SoCalBTV), the San Francisco area (BayAreaBTV) and the Phoenix area (PhoenixBTV), providing a pilot channel list of 30-40 channels of local broadcast TV to viewers on smartphones, PCs and connected TVs at no cost to consumers or to broadcasters, according to a Didja press release.

“With TV stations’ broadcast streams available on mobile devices and connected TVs via LocalBTV, even non-antenna households can easily enjoy local broadcast news and entertainment programming anywhere in the television market,” according to the Didja release. “In addition, local stations and independent channels not available through cable providers or streaming services can now be seen by wider audiences.”

“Didja allows us to stream to devices in an app that contains other local channels. This makes LocalBTV more valuable to the viewer than a single-source app,” said Lynn Londen, owner of Phoenix independent station KAZT, in a statement. “I love seeing people’s enthusiasm when I show them our channels on my phone, and we are looking forward to reaching even more viewers via streaming TV apps.”

According to Didja, more than 20 million U.S. homes watch TV via an antenna and approximately another 10 million homes have no convenient way to watch local broadcast TV, meaning they have neither a traditional cable bundle nor an antenna.

“This expansion to Apple TV, Roku and Fire TV will allow viewers to watch our broadcast partners’ local channels on connected TVs, which is where more and more TV viewing is taking place,” said Jim Long, CEO of Didja, in a statement. “It’s the next logical step as we pursue our mission to help local broadcasters serve their communities, even while TV viewing moves to screens of all sizes.”

The LocalBTV app is available from iTunes, Google Play and on Apple TV and Fire TV.