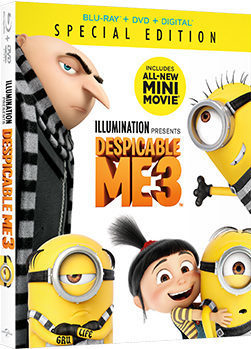 The “Despicable Me” franchise has always tried to have its cake and eat it too. The original film wanted to put a James Bond-type supervillain at the center of its story, yet couldn’t make him outright evil for fear of losing the sympathy of the audience. So that first story was all about humanizing the scheming Gru (Steve Carell) by having him adopt three girls and softening up a bit. And by the end of the second movie he was practically a full-fledged crimefighter after falling in love with agent Lucy (Kristen Wiig) of the Anti-Villain League.

And thus, like “Shrek” before it, an animated franchise begins to expand with more characters, and must find storylines to give them all something to do, while also giving popular minor characters more exposure as well (though the less said about the Minions spinoff, the better).

Despicable Me 3 hits upon a clever if shop-worn premise to at least return the franchise to the spirit of its roots going forward, by introducing a long-lost twin brother of Gru, named Dru who grew up to be something of a goody two-shoes.

It seems Gru’s parents split up with the twins were born, with each taking one. Gru’s mom expresses resentment toward her former criminal son, claiming she got the “second pick.” But in a twist, Dru claims that their recently deceased supervillain dad was more proud of Gru’s villainous exploits than Dru’s pampered lifestyle.

Now, with access to daddy’s lair and arsenal, Dru dreams of breaking bad. Hoping to steer these tendencies toward something positive, Gru enlists his help in tracking down the elusive mastermind Balthazar Bratt (voiced by Trey Parker of “South Park.”)

Bratt is a former child star who resents the world for abandoning him once he hit puberty. He’s a fun bad guy who loves the ’80s and provides a nice excuse for some wry commentary about commercialization and the exploitation of Hollywood, even if it ends up, like in the Minions movie, with another battle involving a giant version of a character rampaging through a city.

Meanwhile, the Minions, looking to return to villainy, leave Gru and end up in jail, setting them up in a side adventure to break out. And Gru’s girls search for a real unicorn while trying to accept Lucy as their mother.

It all adds up to an entertaining bit of fluff that should satisfy fans of the previous movies while being a lot more tolerable to older viewers than the Minions prequel. The film sets up an intriguing fourth chapter should they continue to explore the brothers’ storylines through their logical continuation.

Accompanying the home video release of the film is the new mini-movie The Secret Life of Kyle, a short about Gru’s weird mutant pet thing falling in love with a neighbor’s dog.

Other extras include sing-alongs, a deleted scene, more Minion moments, character profiles, in-universe infomercials and a number of behind-the-scenes videos.