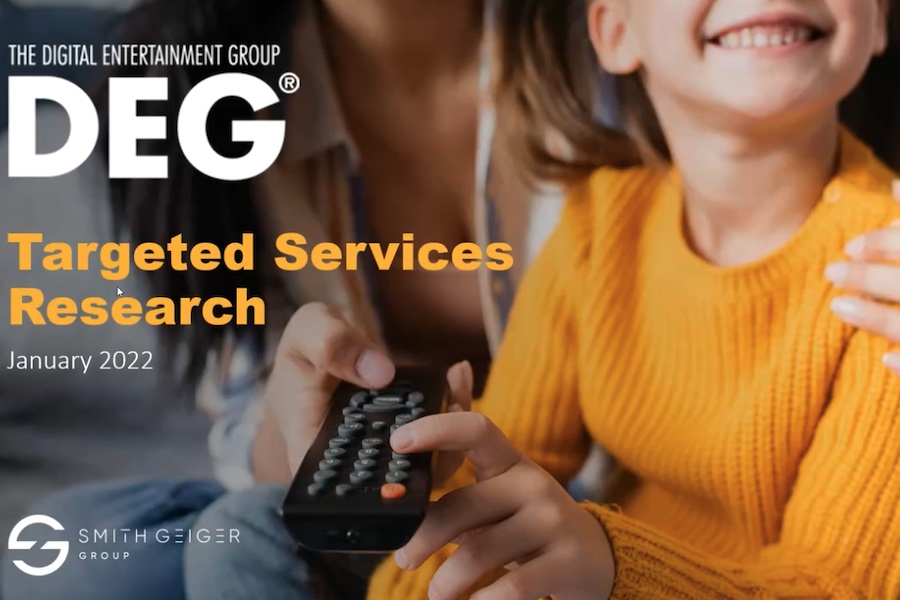 Most streaming video consumers use the top subscription VOD players, but they are also aware of and patronize some of the many smaller specialty streaming services on offer. They like the choices the streaming world is giving them, but would prefer subscribing, watching and paying were simpler.

That’s according to a study commissioned by DEG: The Digital Entertainment Group and conducted by Smith Geiger Group in July and August 2021. The study surveyed 1,536 U.S. streaming media consumers aged 18-65, 513 of which subscribed to at least one “specialty” service (Showtime, Redbox AMC+, Starz, etc.) beyond the “majors” (Netflix, Disney+, etc.).

“SVOD services predictably dominate usage but awareness among specialty services is really broadly distributed and very high,” said Amy Jo Smith, president and CEO of the DEG. “While streamers subscribe to three or four of their must have services, they are also looking for that specialty service that really speaks to them, their hobbies, their interests, and they’re willing to pay to get that.

“We also found that we have a lot more work to do with simplicity and ease of use, regardless of content or genre.”

“Even though not everyone is using all of these services, awareness is exceptionally high,” said Smith Geiger’s Dan Reines.

“People are moving around a lot,” Reines said.

As far as the interface with streaming, consumers want more simplicity. More than half are somewhat or very interested in bundled services (58%) and in a bundled plan in which they could pay for multiple services in a single bill (57%). Less than half (45%) said they were interested in a streaming service that comes bundled with hardware.

“People are looking for an easier way to do everything, and there is some clear frustration about the hoops they have to jump through,” said Reines.

“The common thread is, ‘I just want it to be easy,’” added Smith Geiger’s Chris Lang.

More than half of respondents said they prefer ad-free services and 19% said they prefer services with ads. Respondents were critical of repetitive streaming ads. Meanwhile, six in 10 ad-supported streaming viewers would consider an ad-free upgrade, with specialty streamers even more willing to upgrade at 68%. The mean extra cost they would be willing to pay to upgrade was $4.53 ($5.65 for specialty subscribers).