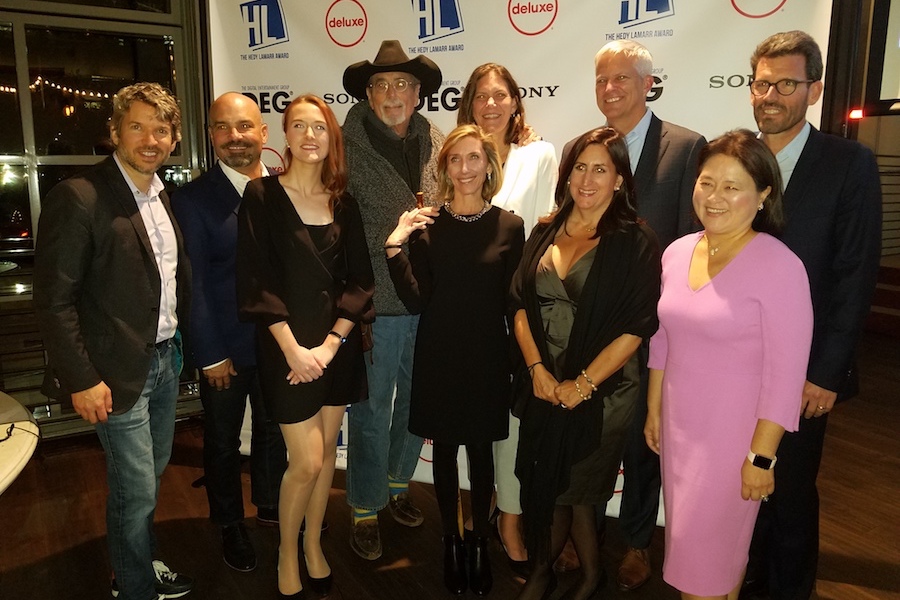 DEG: The Digital Entertainment Group presented its second annual Hedy Lamarr Award for Innovation in Entertainment Technology to Emblematic Group CEO Nonny de la Peña, a leader in virtual reality, in Santa Monica, Calif., Nov. 1. The award recognizes female executives in the fields of entertainment and technology who have made a significant contribution to the industry.

The DEG also presented the Hedy Lamarr Achievement Award for Emerging Leader in Entertainment Technology to Carnegie Mellon University student Cassidy Pearsall, who will receive a financial award to continue her education.

“Thank you for thinking about women and technology,” de la Peña said in accepting the award. “The numbers are appalling. In 2017, 98% of venture funds went to men. In 2016, in 2015, the same — it’s brutal. To celebrate women’s contribution to technology helps change their story to venture capitalists. They always say they invest in founders of the company. Putting women out there like this and talking about Hedy Lamarr and putting people like me and Cassidy out there, you start to change that story, you start to change what they expect a founder to look like, so it’s really important what you’re doing here. This work is important, and I really appreciate that I’ve been able to be a representative of that ongoing attempt to show the world how much we can contribute.”

DEG president and CEO Amy Jo Smith said the awards were created “to celebrate the memory of Hedy Lamarr,” who was both a Hollywood actress and an inventor.

“Louis B. Mayer famously was one of the first people to call her the most beautiful woman in the world and of course many people followed thereafter, but Hedy wasn’t just a beautiful, talented film star,” Smith noted. “She came up with a way of actually making sure torpedoes would hit their destinations during World War II. This highly secure technology, radio frequency hopping, is the foundation on which technologies such as wi-fi, bluetooth and cellular technologies, technologies that we use every single day, are based.”

After reminiscing about finding his mother’s patent as they went through boxes of magazine covers and photographs in the attic, Lamarr’s son Anthony Loder congratulated the 2018 winners.

“Cassidy, my mother would be very proud of you,” he said to Pearsall. “She’d be a fan, and she’d be impressed.”

“To be compared to someone as talented and as driven as Hedy is really an incredible honor,” Pearsall said in accepting her award.

De la Peña was named “The Godmother of Virtual Reality” by The Guardian and Engadget, while Fast Company recognized her as one of the people who made the world more creative for her groundbreaking work in immersive journalism. A former correspondent for Newsweek magazine, de la Peña founded Emblematic Group in 2007. The company became an innovator in walk around virtual reality with the first-ever VR documentary, Hunger in Los Angeles, which premiered at the Sundance Film Festival in 2012. Emblematic has also produced Project Syria, which was commissioned by the World Economic Forum, Use of Force, One Dark Night, Out of Exile, After Solitary and Greenland Melting.

Pearsall is a student in Carnegie Mellon’s Theatrical Video and Media Design program, and a recipient of the university’s prestigious Presidential Scholarship. She is training as a theatrical designer and technician in scenic design and construction and lighting design and programming.

See photos from the event here.