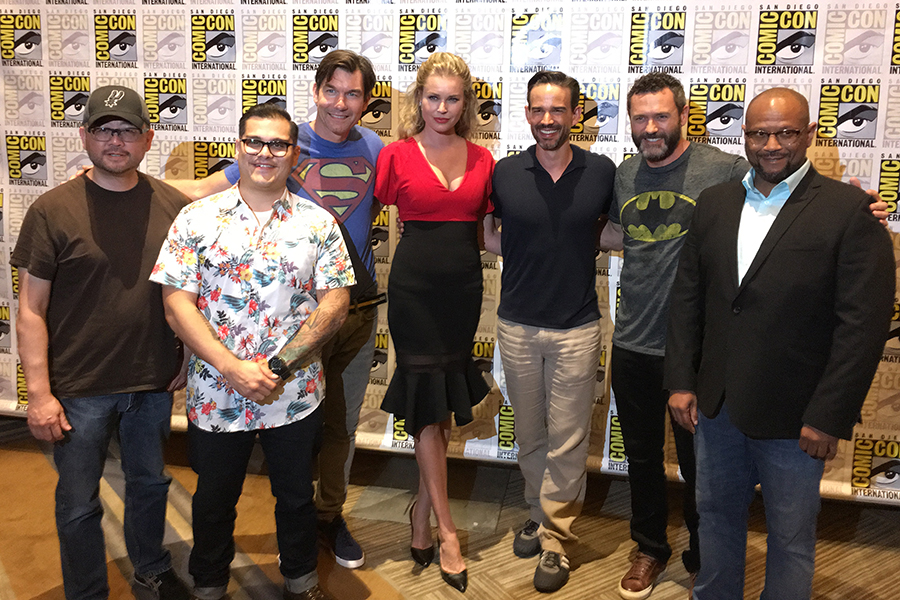 Finding a real-life couple to portray an iconic love story can be a huge boon to a movie. At least, that was the thinking The Death of Superman filmmakers had when casting real-life husband and wife Rebecca Romijn and Jerry O’Connell to provide the voices for Lois Lane and Clark Kent in the animated film.

And yet, they were never together at the same time to record their dialogue.

“Ironically Jerry and I get to play out one of the most classic love stories of all time and we didn’t get to work together one day,” Romijn said. “They set it to the animation and we’d go in to tweak our dialogue and that was the first time we saw our scenes together to see if they worked or not.”

Despite that quirk in the production, O’Connell said their natural chemistry still managed to come through once it was all edited together.

“We really have a rapport with each other,” O’Connell said. “It’s amazing that we were not in the same room at the same time, but we just had a cadence that was really cool to listen to. It was really fun, and I think it really helps the movie because much of Death of Superman is about Clark telling Lois a lot about him.”

The couple was on hand with other cast members and some of the filmmakers to promote the film at its world premiere July 20 at the 2018 San Diego Comic-Con International. 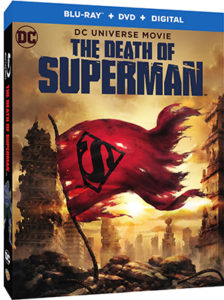 The latest installment of the DC Universe series of ‘PG-13’-rated animated superhero movies, The Death of Superman will be released digitally July 24 and on Blu-ray, DVD and 4K Ultra HD Blu-ray Aug. 7 from Warner Bros. Home Entertainment.

The film, based on the iconic comic book storyline from the 1990s, features Superman giving his life to defend Metropolis from an unstoppable creature named Doomsday. In the comics, Superman’s absence leads to other heroes taking up the mantle of the Man of Steel, a storyline that will be dealt with in a follow-up movie called Reign of the Supermen due next year.

Filmmakers wanted to avoid repeating how the story had been adapted before. Elements were used in 2016’s Batman v Superman: Dawn of Justice, and an extremely abridged version of the story called Superman: Doomsday was the first DC Universe animated movie back in 2007.

Executive Producer James Tucker said that first version performed very well on home video, but the limited running time meant a lot of material had to be omitted and as a result the story didn’t have the resonance it should have had.

“I think the death of Superman needs time to build to and sink in,” Tucker said. “In Doomsday, in the first 15 minutes is pretty much when he got killed. So in this one the whole movie is about what leads up to the event and then we have all this time to show it. So I think it gives you more of an impact because you see what he went through prior to dying. So I think hopefully it has a bigger impact.”

To help craft the final battle, Tucker brought in action-animation veteran Jake Castorena as co-director alongside Sam Liu, who handled the earlier parts of the film.

“James said from the get-go we wanted to do a visceral approach to it … from the point of view of Metropolis,” Castorena said. “Yes, it’s about the fight between Doomsday and Superman, but it’s also about the fallout — the ramifications of seeing your champion being humanized in front of your eyes.”

Castorena said he made a special effort to make sure the fight scenes were integral to the story.

Tucker said tying the film to the continuity of earlier films also helped develop the emotional impact of the story.

“The thing I like about the Justice League in this one is we take time to show their personal friendships with Superman,” Tucker said. “We actually show them being a team and doing mundane team things like having a meeting and kind of being bored and giving each other relationship advice and stuff like that. So I think the story gets helped by being in the continuity and seeing their relationships, so when the ultimate thing happens of him dying it means something.”

A key story element for Romijn was Clark finally telling Lois about his secret identity as Superman.

“I think the weight of that knowledge for Lois Lane really becomes apparent when she witnesses the huge battle between Superman and Doomsday,” Romijn said. “Obviously it’s a lot to take on when your boyfriend is not exactly who he said he was. But, yeah, I think watching this massive battle go down it makes it a lot more emotional.”

“What’s so great about these DC animated films is that while the action is great and you’re going to get a great fight with Doomsday and the whole Justice League is going to try to get in on it, it’s the drama that’s really good as well,” O’Connell said.