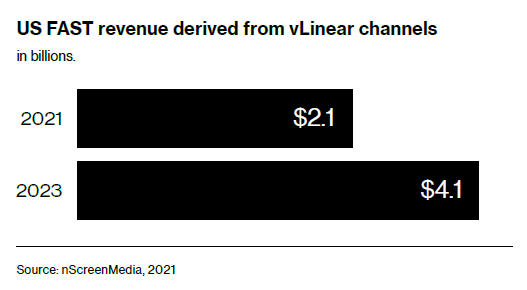 Sunnyvale, Calif.-based nScreenMedia’s white paper reports that FAST content features from 13-14 minutes of commercials per hour, with ad breaks occurring every 6-to-9 minutes, with 3-to-6 ads per break. FAST viewers report spending as much as 20 minutes per day with the aforementioned services.

“There was a time when many forecast the death of linear TV viewing,” Colin Dixon, Chief Analyst at nScreenMedia, said in a statement. “However, it is now clear that the format continues to deliver value to viewers. The FAST market has just begun a long period of rapid expansion.”

The data would seem to support the investment in the FAST market made by video platform providers such as Verizon Media, whose brands include Yahoo, TechCrunch, AOL and Engadget, among others.

“At Verizon Media, we’ve witnessed the evolution of OTT and the rapid adoption of FAST platforms as our customers look to increase their audience reach and provide greater pricing flexibility to consumers,” said Ariff Sidi, GM and chief product officer of Verizon Media Platform. “We are encouraged by [the] market validation as we continue to deliver … for both subscription and ad-supported video consumption.”