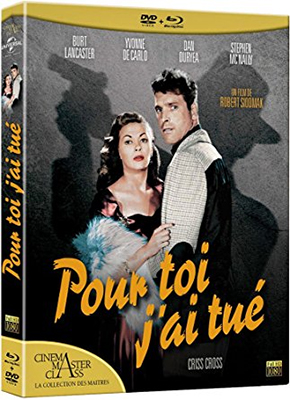 Even in terms of the lowlife-laden melodramas Burt Lancaster made right out of the career gate, Criss Cross seems somewhat undervalued, at least relative to its merit. The Killers and Brute Force are probably the early Burts that come automatically to mind, but Steven Soderbergh, for one, apparently thought enough of Criss Cross to refashion it into 1995’s The Underneath — a remake he says he doesn’t care for much though one included as a “stealth” bonus on the Criterion Blu-ray of Soderbergh’s King of the Hill. At least up to a point, I rather like the revamp myself, and yet this not quite brainstorm always did seem superfluous given what the original has to offer.

On the last point, we don’t have to start with Dan Duryea’s suits — and most people wouldn’t. But part of the fun in the predominantly Universal noirs Duryea made in the ’40s — and Kino Lorber is about to pay homage to quintessential Duryea by releasing a new Blu-ray of RKO-released The Woman in the Window June 19 — is watching him saunter around in duds that don’t exactly advertise him as the new Presbyterian minister on the block. I hope the actor’s costumers here at least rated auditions when it came time a few years later to dress all those chorus boys in the original Broadway product of Guys and Dolls.

In this case, Lancaster and Duryea are the two guys and Yvonne De Carlo the doll who have them both itchy, which is probably playing with a flame-engulfed oil refinery when all three find themselves as participants in or accessories to an armored car robbery. The edge Lancaster has is previous marriage to De Carlo; they may have resumed arguing all the time, but both still have a mutual yen (a circumstance that disturbs his well-meaning mother, whose olfactory powers are apparently keen when it comes to trollops). Duryea’s edge is as a potential money source and, I suppose, a certain swagger that’s part of his makeup. Hard as it is to believe in terms of the 1950s Burt, the latter doesn’t display much of a toothy dimension and is, in fact, basically playing a chump. Albeit an almost laughably fit chump who looks as if he’s been bench-pressing the sadistic prison guard Hume Cronyn plays in Brute Force about 500 times daily.

After some wound-licking time away from after the divorce, Lancaster returns to his home in the old Bunker Hill area of L.A., whose location photography by the great Franz Planer is a monster plus here. He then returns to his old place of employment to become (uh, oh) an armored truck driver, which is probably not a good move when you’re also in need of fast cash to get your ex away from her new husband (yes, Duryea). One thing leads to another, including a memorably staged heist scene and a wrap-up that may match Detour’s for having the courage of its conditions.

Criss Cross reunited Lancaster with Robert Siodmak, who had directed him in his star-making Killers debut amid the supreme noir-ish run this cult filmmaker enjoyed, spanning roughly 1944-50 (though in terms of Lancaster, their decidedly un-noirish The Crimson Pirate collaboration was yet to come). De Carlo is especially good here, but then she was always underrated — and if you doubt this, ask yourself how many actors come off with their dignity fully intact in De Mille’s The Ten Commandments. In this case, she projects a little vulnerability that crucially keeps her from coming off as totally evil (or, for that matter, overly obvious in her sexuality).

There’s also a major casting footnote: Criss Cross was also Tony Curtis’s screen debut via a wordless sequence (again, memorably staged) in which he dances with De Carlo — thus enabling this one to become the rare film noir to give major screen credit to a rhumba band (that of Esy Morales, who’d played with Xavier Cugat and died at 33 of a heart attack shortly thereafter). Curtis’ character name is “Gigolo” per the IMDb.com listing, which I suppose is more credible than “Antoninus” in Spartacus or anyone named Bulba (in this case, it was “Andrei”) in Taras Bulba. In any event, this bit apparently got Universal-International’s press department about a zillion letters wanting to know who this Mr. Wavy-Hair was, and on a dime the studio buildup mechanism got in motion by giving Curtis slightly larger parts in subsequent releases including the ultimate U-I reward: featured billing as an army captain in a Francis picture.

This splendorous release from France’s Elephant Films has been released as Pour toi j’ai tué, which my Googled French translates into For You, I Kill You — which does a better job of describing my relationship with a couple editors from my long past than Criss Cross’ does to portend the movie’s complex flashback structure. By any name, this is another of Elephant’s beautiful renderings of from Universal and Universal-controlled libraries, which include all but a handful of Paramount talkies from 1929 to 1949. Pricey two-fers — with, that is, bonus DVD inclusions — that do play on Region ‘A’ machines, they have only minimal extras (and in French, at that). But visually, the ones I’ve seen are of Criterion quality, and programmatically, they go places that most high-def distributors don’t. (Douglas Sirk anamorphics, anyone? Or how about One Hour with You and If I Had a Million, two just-out Paramounts from the early ’30s?

My visiting younger son walked in when I was watching Criss Cross on a 75-inch screen and asked, “What’s the matter with that black-and-white?” But before I could clobber him verbally, he then clarified with, “It looks so sharp — almost more like color.” Putting it another way, he was seeing black-and-white the way it’s supposed to look and how it was conceived; it’s just that b&w transferring has become such a specialized skill that only a handful of Blu-ray distributors (and this excludes even some good ones) have the skill to go the full route. Here’s one release that does, and oh, do some of those Bunker Hill exteriors look like pristine b&w glossy photos.