Audiences and the industry can expect disruption to the supply and release of new content for more than a year as a result of production delays caused by COVID-19, according to a new report by Ampere Analysis.

The report finds 60% of scripted releases at risk of delay and a further 5% to 10% that may be lost entirely.

“Our analysis indicates that the unscripted market will more easily weather the current pandemic thanks to the production of non-location-based, and COVID-related, content,” according to Ampere. “However, the delay of summer ‘blockbusters’ like ‘The Bachelorette’ and ‘Love Island’ will have a negative impact on even the unscripted sector. We predict the scripted sector will take a far bigger hit: even if production is able to restart in June, underlying effects of the shutdown will be felt in the scripted TV market for the remainder of 2020, and well into 2021.” 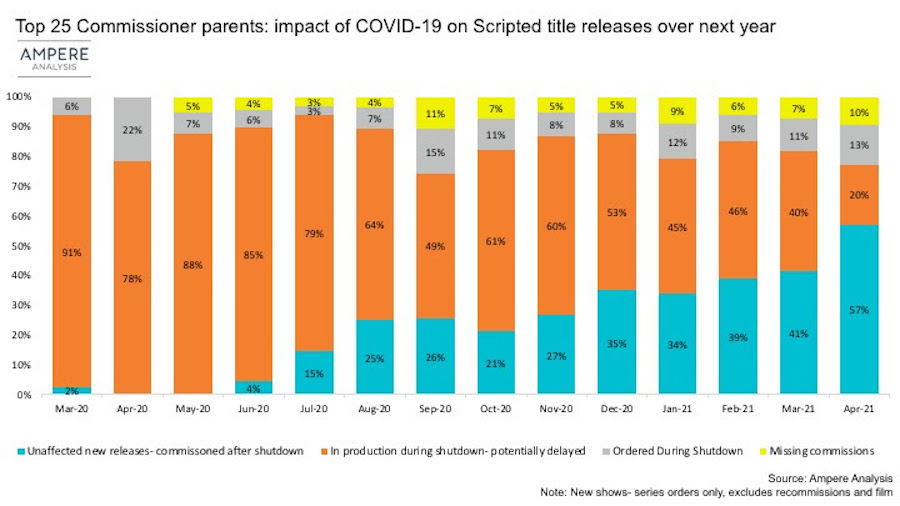 In the second half of 2020, Ampere expects that the world’s top TV commissioners will release between 5% to 10% fewer new scripted titles on a monthly basis than previously predicted. The effect will last into the first half of 2021, and potentially longer.

Over half of scripted titles which would normally have released in the second half of 2020 are at risk of delays in release schedules due to the current production hiatus. Titles scheduled for release from June to August are likely to largely be in post-production, and Ampere expects delays will be more limited for this period.

The number of scripted TV titles at risk of delay remains high for a year, with impact particularly intense at the traditional start of the broadcast season in the autumn. At this point, between 50% and 60% of scripted titles that would normally have been released in the period are at risk of delay by Ampere’s estimates. A further 5% to 10% of scripted titles expected to have been released during the autumn months are likely be lost entirely due to the current production shutdown, Ampere predicts. The proportion of scripted releases unaffected by the shutdown only rises above 40% in March 2021.

Compared to 2019, only 51% of scripted projects ordered during March through May 2019 have been released to date. With commissioning of scripted content down by 40% in the equivalent period of 2020, Ampere predicts the current lack of commissions will impact the supply of content well into 2021.

“There is one certainty among the current uncertainty — that the COVID-19 pandemic will change the TV production industry far beyond the end of the lockdown,” Ampere senior analyst Fred Black said in a statement. “Initially, we expect delays to cause gaps in scripted TV release schedules, which broadcasters and streaming players will have to fill with other content. However, as delayed productions begin to fill out content gaps in later months, these gaps will begin to close. But this has further ramifications. The knock-on effect of delayed releases is a likely depression of the number of new commissions for some time after the shutdown ends, as commissioners look to fill schedules with delayed projects they have already invested in before signing off new ones.” 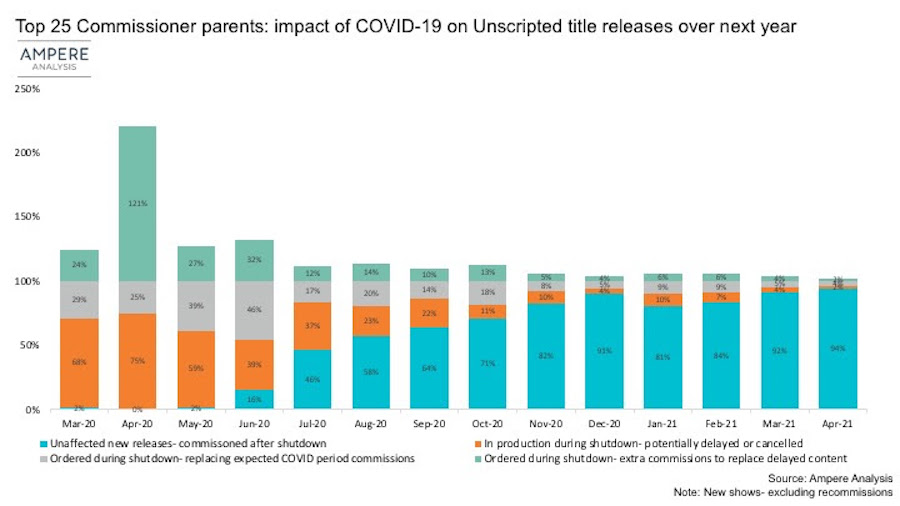 “Commissioners are currently creating a large number of extra unscripted projects which can be used to cover gaps in the schedule left by delayed titles or the missed scripted commissions,” said Black in a statement. “This number of extra commissions will begin to wane as the shutdown ends, with audience appetite for COVID-19-specific content already showing signs of falling.”