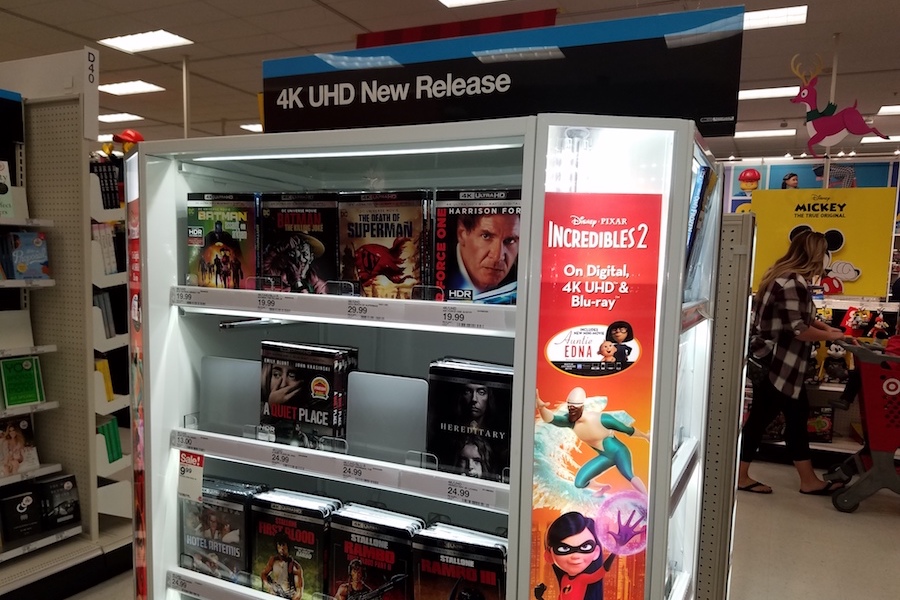 Remember when things were simple? The only way to watch movies at home, on demand, was on videocassette. Yeah, they were clunky. The pause function was a flickering joke. And you had to bring them back to the place you rented them from or risk incurring an onerous “late fee.”

But you knew what you were getting.

These days, it’s very, very confusing. We have three discs formats — DVD, Blu-ray Disc, and 4K Ultra HD Blu-ray. The content that’s becoming available on 4K Ultra HD truly is impressive. And yet you can’t watch the movie in true 4K Ultra HD unless you 1) have a 4K Ultra HD Blu-ray player and 2) own a 4K Ultra HD TV — and even then, you need to make sure it’s got HDR for the truly optimum viewing experience.

Complicating matters further is the presence of cheap players that promise an “upscaled” UHD experience. How many consumers have bought these, lured by the “UHD” acronym on the box, only to find they don’t even play 4K Ultra HD Blu-ray Discs? Instead, they play standard Blu-ray Discs — and the difference is negligible, particularly since (and this is just my hunch) a fair number of these inexpensive players are being bought by people who haven’t yet upgraded to a UHD TV.

And, oh yes, let’s not forget the buzz around 8K, with a flood of 8K Ultra HD TVs already on the market.

On top of that, Bill Hunt, editor of The Digital Bits, fears studios are sending “mixed signals.” “Disney on Sept. 10 released 10 4K Ultra HD titles on the same day — classics like Aladdin, the new Aladdin remake, and a number of beloved Pixar titles. Many readers of The Digital Bits are asking, ‘At $30 each, who can afford to buy them all?’ This happens almost monthly.

“Meanwhile, Amazon is having constant pissing-matches with the studios, which means preorders for major BD and 4K titles are disabled.”

Those in our industry with a vested interest in the transactional side of the home entertainment business — which includes every single one of the major studios — have a tough job. They need to promote digital transactions, which they see as their best hedge against complete domination by the streamers. But they also need to continue promoting physical media, since that’s still where the bulk of the revenue lies.

And 4K Ultra HD Blu-ray, the newest and hottest kid on the block, is a natural for Hollywood’s promotional muscle.

So the first thing we, as an industry, need to do is partner with the CE industry to really promote the hell out of the 4K Ultra HD players. We also need to do what we can to stomp out those dreaded “upscale” Blu-ray players — available, sadly, not just from obscure Chinese manufacturers, but also from some of the most respected names on the CE side.

Next, we need to simplify and clarify the message: Buy the 4K Ultra HD Blu-ray because it’s far and away the best way to watch that movie.

We also need to play up the permanence of physical media. The ownership proposition, once so important in the early days of DVD, has been beaten down by digital (who hasn’t lost songs, or movies, on their Apple accounts?). On top of that, it’s not really clear what the consumer is buying — the movie, or merely rights to watch that movie.

Consumers may no longer feel compelled to build massive movie libraries. But everyone still wants to have at least a modest collection of favorites, and despite steady growth the fact remains that digital sales continue to be dwarfed by streaming and even packaged-media sales — simply because consumers don’t see the value proposition.

The value of a physical disc is clear — and that’s why, if properly marketed, 4K Ultra HD sales should have plenty of room for growth.