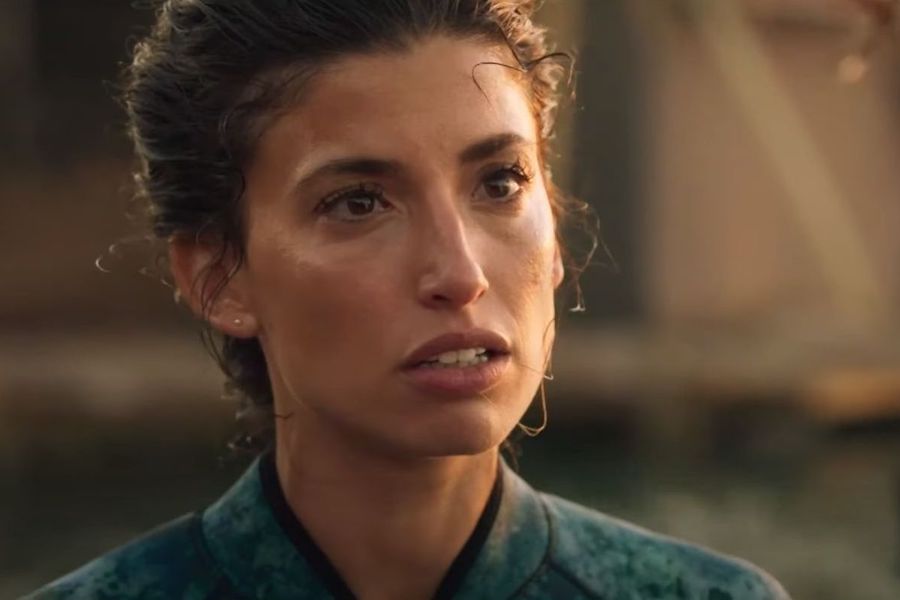 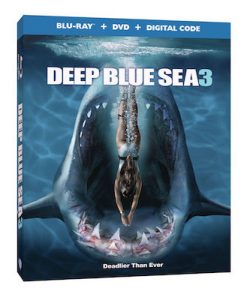 There were several challenges when making the third installment in the “Deep Blue Sea” feature franchise, including overcoming the usual difficulties with shooting on water (a la Steven Spielberg’s legendary struggles with Jaws) and coming up with a new premise that didn’t involve an underwater lab, as the two previous movies had.

Global warming came to the rescue on the script. Screenwriter Dirk Blackman did some research on small islands sinking as the oceans rise and had a moment of inspiration.

“I thought, ‘Let’s sink the town,’” he said during a July 24 online panel at Comic-Con@Home for the July 28 digital and Aug. 25 Blu-ray combo pack and DVD release of Deep Blue Sea 3 from Warner Bros. Home Entertainment.

The film follows Dr. Emma Collins and her team, who are spending the summer on a sinking island studying the effect of climate change on great white sharks. Their routine is disrupted when a team led by her ex-boyfriend and marine biologist Richard shows up looking for three rogue bull sharks.

“We figured out a way to be 360 with our water set so that we could have all of the sets gathered around this cove and most of the rest of everything else was made up digitally,” he said.

The underwater scenes got an assist from some professionals.

“There are so many additional safely issues with shooting around water, from what can happen with electricity to people falling in, so safety was paramount,” Pogue said. “We were very fortunate in that we had this incredible South African team called the Frog Squad that do underwater projects all over the world. They are essentially South African SEALs that also make movies.”

The actors spent time training and getting scuba certified before the shoot, noted Emerson Brooks, who plays Shaw, a sort of brother/father figure for Emma.

“I think all the training that we did, all the real underwater experience … that really added to it, that put you in it, certainly,” added Tania Raymonde (Emma).

The water in the winter in South Africa was cold, and “we were always wet, always wet,” she recalled.

Shooting in water posed challenges for the director as well.

“I think about 30 % of the time it went as planned— so many things would break,” Pogue said. “The communication underwater is super challenging. You’re basically talking to 20 people with a giant underwater megaphone that no one can really understand.”

Mumbling like the teacher a “Charlie Brown” special, Nathaniel Buzolic (Richard) demonstrated what the actors could hear underwater.

“There was this underwater megaphone that looked like something from the Victorian era, which is like a box with a string on it that was threaded all the way down into the water,” added Raymonde. “Once you suit up and you’ve got your regulator and they make sure you’ve got air in the tank and check all your levels and you’ve got everything on and you go under, it’s kind of a pain to get back up to the surface, take everything off, go get notes from John and come back in. So once we were in the tank and underwater, we were pretty much underwater and stuck and that was it. … And when you’re under there, you don’t hear anything because your regulator is so loud. Every time you take a breath there are bubbles everywhere, you can’t hear anything.”

The Frog Squad helped interpret by using a sort of “sign language,” she said.

“[The process] definitely influenced the tone of the movie in that there’s a more realistic as opposed to a controlled, stylized feel to the movie, where we’re trying to sort of use those happy accidents that happen as a result of this chaos,” Pogue said.

He credited the cast for being game to go the extra mile in shooting the action sequences.

“During the casting process, one of the things that we talked about was, given the resources that we’ve got, that you’re going to have to do your own diving and your own stunts,” he recalled. Deep Blue Sea 3 wasn’t “one of those movies where we just sort of stop everything and bring in your double,” he said.

“In many of the key sequences, it was very important that we see your faces, we see you experiencing what’s happening in the action,” he said.

“You kind of bring it above the water, and all hell breaks loose,” he said.

Inspired by another shark movie The Deep, screenwriter Blackman added a fight.

“I don’t expect to see a fight, necessarily, in a shark movie, so we have a fight,” he said.