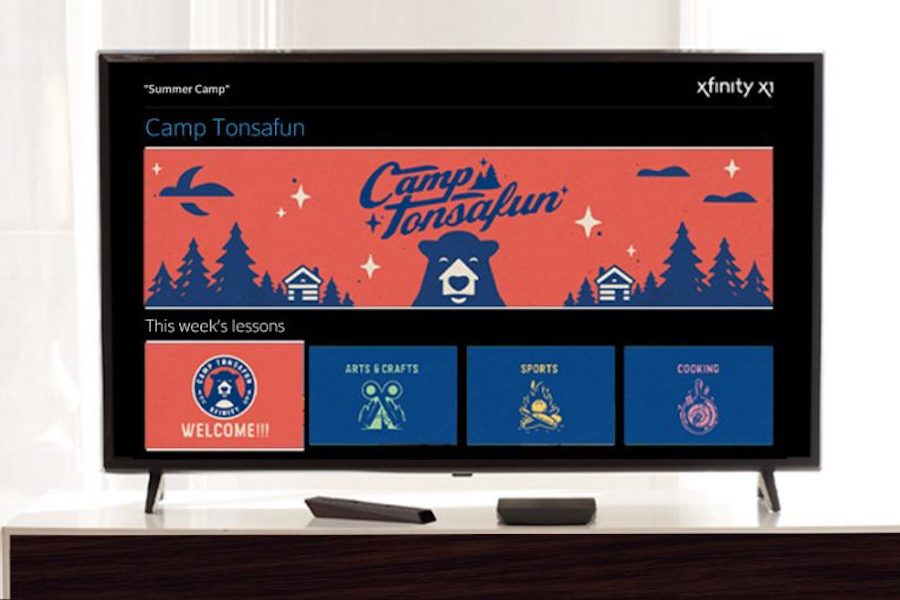 More than 14 million children and adults attend camp in the U.S. every summer, according to the American Camp Association, and “Camp Tonsafun” is intended to be a resource for Xfinity subscribers who may be impacted by the closure of many programs this summer due to COVID-19.

Available on Xfinity X1 and Xfinity Flex, the camp features video lessons and activities spanning arts, sports, cooking, experiments and adventures geared toward children ages 5 to 12. Campers can participate using items that they likely already have at home.

Jade Catta-Preta, the new host of E!’s “The Soup,” is the camp director, kicking off the series of weekly video lessons and activities. They include: “Learn to Animate a Minion” with Illumination and Brad Ableson, co-director of Minions: The Rise of Gru; “Be a Smart Ninja” with Jessie Graff from “American Ninja Warrior,” “Prank Your Friends and Family” with Scott Tweedie from E! News; “Bring Dinosaurs Back to Life” with Jurassic World themed magic tricks; “Build a Home Obstacle Course” with Nate Burkhalter from “Exatlón Estados Unidos,” and “Throw a Tie-Dye Party” with Dina Cerchione, stylist for Howie Mandel (“America’s Got Talent”), and “Deal or No Deal.”

In addition to Camp Tonsafun, Xfinity X1 subs can enjoy Xfinity’s Summer Guide, which spans more than 2,000 hours of seasonal entertainment curated by its team of TV editors into fun and interactive editorial collections.

They include: “For the Family” featuring recommendations for a game or movie night; “Virtual Vacations” that enable customers to travel to popular cities around the globe or even adventure to Universal Studios Orlando without leaving home; “Summer Blockbusters” highlighting the most buzzworthy flicks of the season; “Summer Reading List” highlighting TV shows and movies based on books; “Festival from Home” highlighting virtual concerts and past music festivals; “Summer TV Preview” featuring the most anticipated shows and their premiere dates; “What We’re Watching This Summer” compiling picks from each of the Xfinity TV editors and their new and latest exclusive ‘Xfinity Hangouts at Home’ interviews with The King of Staten Island’s Judd Apatow, Scoob!’s Will Forte and Ken Jeong, Da 5 Bloods cast, including Spike Lee.