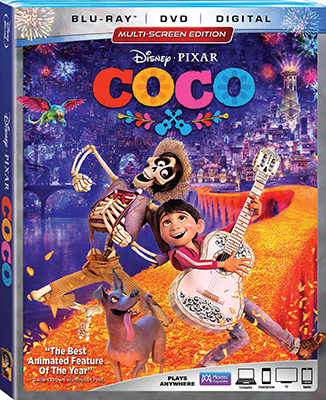 Pixar’s latest adventure is a visually stunning treat with a heartwarming story about family and following your dreams.

Miguel sneaks away to compete in a festival to commemorate the Day of the Dead holiday, but finds himself trapped in the Land of the Dead after trying to steal a guitar out of desperation. Though his ancestors could send him home, he rejects their condition of denouncing music and sets out to find his great-great-grandfather on the belief he will send him back with the encouragement to become a musician.

The film is at its most creative in establishing the world of the dead, where the inhabitants look like the sugar skulls that often symbolize Day of the Dead celebrations. This isn’t a spooky or scary land, but simply a vibrant civilization governed by a unique set of rules cleverly established by the filmmakers based on Day of the Dead lore and other Mexican folk traditions.

True to form for Pixar, the Blu-ray is loaded with bonus materials highlighting the film’s many strengths, from the artistic designs to the music to the story details, starting with a commentary by director Lee Unkrich and co-director Adrian Molina.

There are about 80 minutes of behind-the-scenes featurettes spread across two discs, covering the extensive research conducting by the filmmakers in visiting Mexico, to the animation process, casting and more. About 20 minutes of these are on the first disc.

For those interested more in how the story was crafted, the first disc offers 33 minutes of deleted scenes and early story concepts that changed as the film evolved.

In addition to 60 minutes of making-of featurettes, the second disc also offers the film’s trailers and some fun animated vignettes, plus a short video about a guitar maker who constructed a replica of an iconic guitar central to the story.

Finally, for the artistic-minded, the Blu-ray offers some arts and crafts activities — a video on how to draw a skeleton on disc one, and a guide to creating a papel picado (a paper cutout decoration) on disc two.