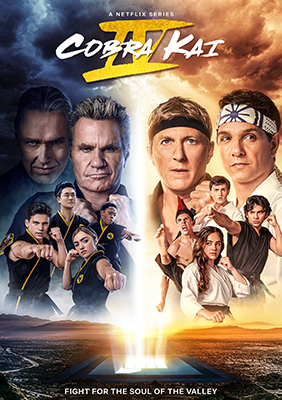 The creators of “Cobra Kai” have the show firing on all cylinders in its fourth season, bringing to a head storylines dating back to the original “Karate Kid” trilogy from the 1980s.

In fact, season four of “Cobra Kai” is so good it retroactively makes The Karate Kid Part III almost watchable.

The third season ended with the stakes set for an epic showdown, as the rival dojos agreed to let the next All-Valley Tournament decide their fates, with the losing factions shutting down. Johnny Lawrence (William Zabka) broke free from Cobra Kai and his former sensei, Kreese (Martin Kove), to form his own dogo, Eagle Fang. He reluctantly forms an alliance with his old rival, Daniel LaRusso (Ralph Macchio) to take down Kreese, who turns to help from his old pal Terry Silver (Thomas Ian Griffith), the main villain from The Karate Kid Part III.

Silver, a wealthy industrialist who has mellowed out with age, needs some convincing to return to the fold, in one of many scenes in which the show knowingly, necessarily and hilariously picks apart the absurdity and stupidity of the awful Part III.

Meanwhile, Johnny and Daniel’s clashing styles threaten to upend their partnership as the rivalries between their students and those of Cobra Kai only grow more intense, particularly the feuds between Daniel’s daughter Samantha (Mary Mouser) and “Queen Cobra” Tory (Peyton List), and Johnny’s own son (Tanner Buchanan), who joined Cobra Kai to take on Johnny’s prized student, Miguel (Xolo Maridueña).

However, the show doesn’t paint the characters as simple heroes and villains, but offers shading to their personalities to make them sympathetic regardless of which factions to which they belong. When the tournament finally plays out over the season’s epic finale, there are so many angles culminating that it’s nearly impossible to figure out how they are going to play out, which only adds to the palpable excitement of the episodes.

As with the previous seasons of the series, the abundant references to “Karate Kid” lore and its tangents, and 1980s culture in general, make this an easy sell to franchise fans, but the show is also developing into a decent character piece with a lot to say about bullying, parenting and the power of self-reflection.

While the season provides some satisfying payoffs to story arcs and conflicts that have been years in the making, it also sets the stage for some intriguing new directions, steering the story in a way that’s just begging for a certain Oscar winner who starred in The Next Karate Kid to show up in season five.