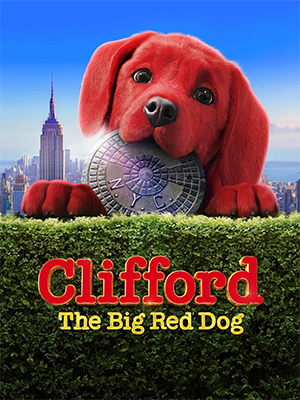 Based on the long-running children’s book series of the same name, the Clifford the Big Red Dog movie is a prime example of stretching the source material to fit the feature-length format.

In this case, it’s the adventures of a giant dog and the little girl who owns him.

In this case, the plot is a bit like the live-action Dumbo, with a framing device involving John Cleese as a narrator talking about love and magic, which is very reminiscent of Seth MacFarlane’s Ted.

Clifford is a bright red puppy who is left on the streets when the rest of his doggy family is taken to the pound. He gets scooped up by Mr. Bridwell (Cleese, whose character is named for Clifford’s creator, Norman Bridwell) and taken to his traveling exhibit of rescued animals.

Meanwhile, sixth-grader Emily (Darby Camp) is left in the care of her irresponsible uncle (Jack Whitehall, getting some serious exposure between this and Jungle Cruise) when her mother (Sienna Guillory) is called away on business. On the way to school, Emily sees Bridwell’s tent and is enamored with Clifford, who somehow ends up in her backpack.

Since her apartment doesn’t allow pets, she has to take him back the next day, but overnight he grows up to be 10 feet tall, but still as playful as a puppy. And Bridwell, being a mysterious Mary Poppins magical type character, has disappeared.

While Emily and her pals try to find Bridwell to see if Clifford can be returned to normal, his playful demeanor in public makes the news, attracting the attention of the owner of a biotech firm trying to genetically engineer larger animals for food. So he wants to capture Clifford and study him to see why he’s so big. And the chase is on.

The movie has some fun dealing with some of the obvious issues that would arise with a gigantic dog (like how to give him a medical exam) while sidestepping others (like how much he would  have to eat to stay healthy at that size).

Like the dog at the center of it all, Clifford ends up being some harmless fluff that should keep young viewers entertained.