Cinedigm on March 2 announced that its Bloody Disgusting horror brand reported record growth for its podcasts in 2021. The brand saw more than 40 million podcast downloads last year, up 50% from 2020, and a 25% increase in listeners.

Currently distributing 11 horror-themed podcasts, the Bloody Disgusting Podcast Network curates both fiction and non-fiction shows, covering everything from the sinister anthology Bleeder’s DIEgest to the Stephen King-inspired The Losers’ Club to SCP Archives Presents. The company’s most popular podcast Creepy, which Cinedigm claims is downloaded more than a million times each month, gives voice to urban legends and horror stories primarily posted online, which are known as “creepypastas.” 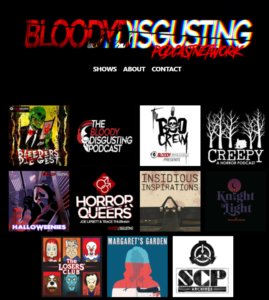 The growth trajectory continues into 2022, with Bloody Disgusting’s podcasts on track to gross more than $1 million ad dollars before the year’s end, and major brands such as Babbel, Audible, HelloFresh and Nectar Sleep as current sponsors. Bloody Disgusting is investing aggressively to scale its podcast business with more original shows in development.

“It has been extremely exciting to watch the Bloody Disgusting Podcast Network see such tremendous growth year over year,” Tom Owen, managing director of the brand, said in a statement.

Over the past 10 years, podcasts have become an increasingly popular form of entertainment. According to Statista, data from a study conducted in early 2021 showed that 41% of the population reported listening to a podcast in the previous month, which was more than three times as many listeners as a decade earlier. Diversity in content has played a role in the medium’s continued rise. Historically skewing younger, the percentage of podcast listeners aged 55+ more than doubled between 2017 and 2021. This number will undoubtedly continue to rise as more Americans familiarize themselves with the medium. Statista reported that around 120 million Americans listened to podcasts last year, with that number expected to jump to around 160 million by the end of 2023.