"The Chilling Adventures of Sabrina"

Netflix continues to dominate the top digital originals chart with nine entries, including “The Chilling Adventures of Sabrina,” which shot up to No. 1 the week ended Nov. 3 with a 111% gain in Demand Expressions, according to Parrot Analytics.

The reboot – which is much darker than the original, comedic “Sabrina, the Teenage Witch” – debuted at No. 4 the prior week, even though it only became available for viewing on Oct. 26, one day before the tracking period ended.

“Marvel’s Daredevil” slipped to No. 2 on the digital originals chart, after two weeks at No. 1. The Netflix superhero series saw its Demand Expressions drop 19% to 43.8 million, compared to 62.9 million Demand Expressions for “Sabrina.”

“Stranger Things,” also from Netflix, remained at No. 3 on the digital originals chart.

“Castlevania,” a gothic horror series based on the 1989 Japanese video game Castlevania III: Dracula’s Curse, by Konami, became available on Netflix on Oct. 26. The series centers around Trevor Belmont, who defends the nation of Wallachia from Dracula and his followers.

“House of Cards,” the first Netflix digital original, reappeared on the chart at No. 10. In anticipation of the Nov. 2 launch of Season 6, demand shot up 43%.

Amazon Prime Video’s sole chart entry, “The Man in the High Castle,” slipped to No. 9 from No. 7 the prior week. 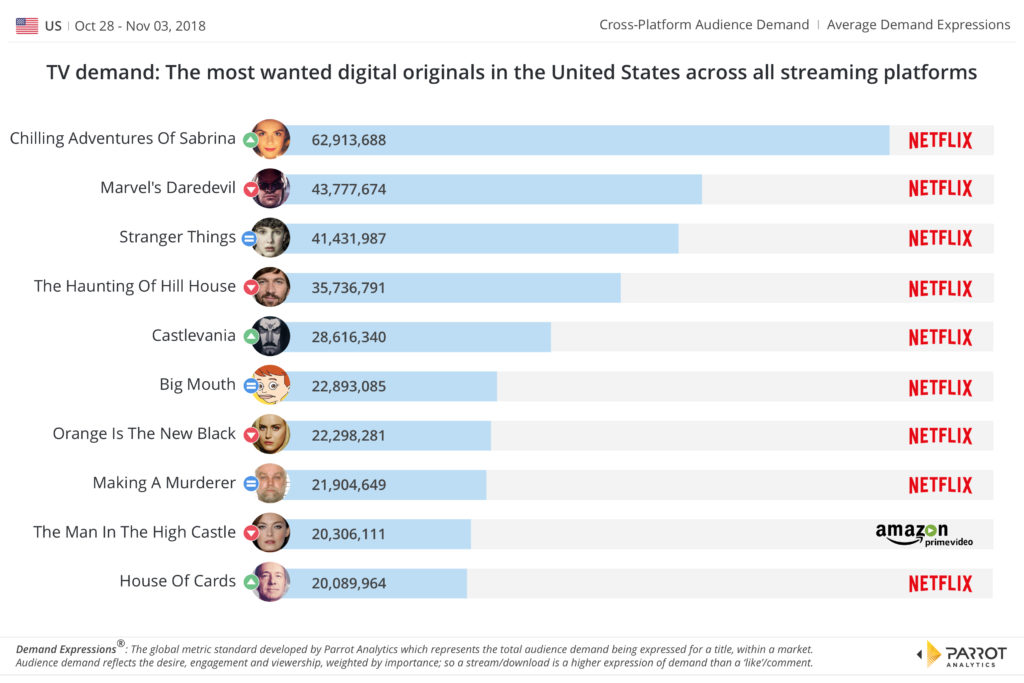