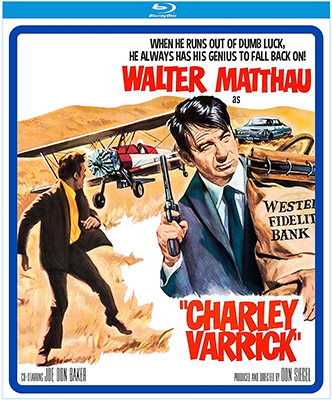 Don Siegel’s much-deserved newfound glory as a full-fledged ‘A’ director was put to use in a slightly eccentric way for his first picture after Dirty Harry turned into a worldwide phenomenon. Though it’s as mean, lean and pepperishly cast as Siegel’s previous pictures, 1973’s Charley Varrick has always seemed a little off-center to me, serving up what was always the closest we ever got to “Walter Matthau — Action Hero.”

I never really bought that concept and always regarded Matthau as an actor for whom it was difficult to forge an emotional attachment, though his Oscar-winning “Whiplash Willie” characterization in Billy Wilder’s The Fortune Cookie remains, for me, one of the movies’ most memorable characterizations from a reliably comic sourpuss force. A lot of Charley fans disagree with the earlier point, and I have to respect this from a film that originally tanked at the box office and yet has a cult bigger than I knew. Though it’s kind of a cold cookie — which is not the same thing as a lack of sentimentality that was always a Siegel hallmark — it’s something of a model in no-fat story construction and planting seeds that will pay off much later. And the new 4K presentation here captures exactly what Universal Pictures looked like in 1973 (along with another of those Lalo Schifrin scores that recalls what they sounded like: ’60s TV from Universal subsidiary Revue Studios).

Nevada crop duster Varrick is a onetime air show pilot wed to a onetime air show entertainer (Jacqueline Scott) who’s now the getaway driver for her husband’s minor bank heists in the Southwest. We open when another of their presumed small-time stickups goes horribly wrong near Albuquerque, resulting in her death and added fatalities on both sides of the law. This leaves pragmatic Charley with just one accomplice: a not very bright Vietnam vet with a drinking problem played by Andy Robinson — who’s not really that akin to the all-timer psycho Robinson played as Dirty Harry’s central heavy but just a dunce who’s never had a chance to enjoy even the most minor of life’s luxuries.

Well, he has the opportunity now because an expected tally of a couple grand ends up being close to three-quarters of a million dollars, which Charley is savvy enough to realize must be part of a money-laundering scheme likely run by mob-connected parties who’ll be in a vengeful mood to get this booty back. For this reason, he tries to put the kibosh on spending the loot for three or four years while realizing that this just isn’t going to sell with his impatient younger partner in crime. We also get a resigned-to-it vibe that Charley realizes that the kid’s splashy plans will get him killed closer to sooner than later.

So here we go. The local cops (shown for once as competent) are after the perpetrators. Hood point man John Vernon (in an example of “of course” casting) is after them, too — as is, more directly, the Stetsoned muscle he hires to enforce matters in sadistic ways (a svelte Joe Don Baker, before he put on the pounds that helped make Mitchell my all-time favorite “Mystery Science Theater 3000” entry). This is a movie where everyone is in it for something, including a couple of women characters who turn out to be somewhat more amoral or at least less sincere than they initially seem to be. Yet it’s tough to figure out what even a tidy monetary reward could do to fill the walking void that is Baker. Superficially, he has more on the ball than fellow racist Robinson, but it’s all relative. Neither one would be a likely candidate to named anyone’s Ambassador to the Court of St. James.

The film is based on a John Reese novel called The Looters and screen-adapted by past Siegel collaborators Howard Rodman (Madigan, under a pseudonym) and Dean Reisner (Dirty Harry) — and, if anything, I love Madigan even more than the Eastwood phenom, regarding it as one of the three or four best American cop movies of all time. The same grubby pedigree sets the table for Varrick, and despite never being bowled over, I’m full of objective admiration for the craft with which Siegel put it together. And of the veteran pros he got to be in it (beyond the aforementioned, we get Sheree North, Norman Fell, William Schallert, Tom Tully and even, as a bank guard, veteran ‘B’-pic cowboy star Bob Steele, to whom Siegel probably gave the role as favor to an old-timer). Plot-wise, the only moment that feels blatantly false to me is the zip (and un-zip) with which the Felicia Farr character succumbs to the physical charms of a craggy crop duster when nothing about suggests that she’s particularly indiscriminate. Though as Toby Roan suggests on his Blu-ray voiceover commentary, maybe Siegel couldn’t resist plunking Jack Lemmon’s real-life wife into bed (and a round one at that) with Matthau.

The always encyclopedic Roan loves the picture, as presumably does film historian Howard S. Berger, who obviously put a lot of thought into this disc’s ethereal visual essay on Siegel’s style; for me, it has a low tons-o-fun quotient, and it’s the casting, staccato editing rhythms and brutal attitude toward life that make the best Siegels work for me.

And yet, critic and Blu-ray essayist Nick Pinkerton is also an apparent enthusiast, as are the production veterans or sons of veterans interviewed on an accompanying 72-minute production documentary, which has a lot of stuff on the movie’s standout stunt work. (There’s nothing like having a car hood flying up — unplanned — when you’re the stunt person behind the wheel in a fast-moving getaway scene.) Apparently the only person who didn’t like the picture was Matthau, and some thought his bad-mouthing convinced the studio to give up even on the fall release of a picture that had once intended as an Easter attraction. Starting with its three or four fatalities in the well-staged opening scene, commentator Roan is right to ask, “What about Charley Varrick says ‘Easter’ to you?”

Even at the time, I thought the picture felt overextended, given a director whose movies were known for the taut punch of those great Carmen Basilio-Gene Fullmer bouts from my early adolescence; in other words, it was a warning. I couldn’t have been too wrong because the only Siegels I liked for the rest of his career amid a sea of disasters were John Wayne’s The Shootist (which has always been more of a double or triple to me instead of a home run) and, to some extent, Escape From Alcatraz, which is impresses less if you’ve seen Robert Bresson’s A Man Escaped.

Still, Siegel is a major figure in my formative filmgoing experience, and Charley Varrick is well-crafted enough to mandate at least some level of personal appreciation. For the record, were I to list my ten favorite Siegels in order of appreciation, the list would go something like: 1) Invasion of the Body Snatchers (’56); 2) Madigan (all just out from Kino Lorber); 3) Dirty Harry; 4) Baby Face Nelson; 5) Flaming Star; 6) Hell Is For Heroes; 7) The Shootist; 8) The Big Steal; 9) The Lineup; 10) Coogan’s Bluff. One I need to see again is The Duel at Silver Creek, which surprised me at the time by being something of a standout in terms of Audie Murphy Westerns, which I enjoy on sheer principle, anyway.