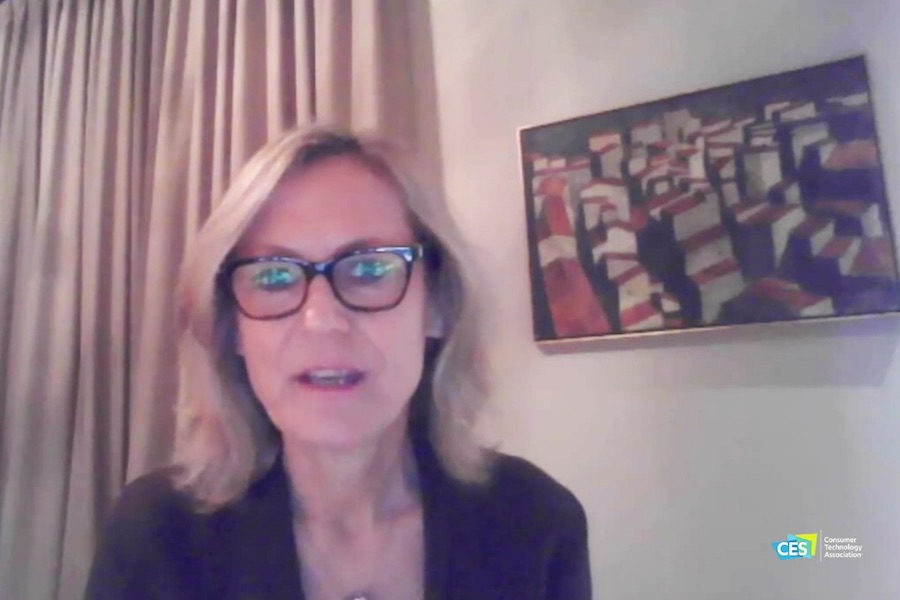 “We’re pivoting to be able to adjust to the environment we live in,” she said, adding, “I have some amazing movies that I would like the public to be able to see.”

As cinemas shuttered due to COVID-19, the studio made a controversial decision to release its theatrical slate through 2021, including Wonder Woman 1984 released on Christmas Day, in theaters (that were open) and at the same time on HBO Max for 31 days.

“We needed an alternative,” Sarnoff said. “Remember, this is a global theatrical release and HBO Max is only in the U.S.”

It’s very hard to launch a film theatrically in a pandemic, she said, noting that marketing in cities where a film is playing is planned out weeks in advance and, with theaters in danger of closely at any time, that wasn’t feasible.

She noted that earlier in the pandemic the studio was able to release Christopher Nolan’s Tenet theatrically.

“We knew Tenet would play well overseas” where more theaters were open, she said.

Sarnoff joined the company in the summer of 2019, following the exit of Kevin Tsujihara, who left the position after allegations of sexual misconduct. When she discussed taking the studio job with AT&T CEO John Stankey, “he talked about breaking silos,” she said, and that has become one of her key aims.

“It is something I’m most excited about and most proud of,” Sarnoff said, noting “how siloed Warner Bros. was in and of itself.”

She has instituted weekly meetings on the company’s big franchises to discuss collaboration.

“You don’t want your fans to see your org chart,” she said, adding, for instance, “they can see the movies don’t have anything to do with the TV.”

Sarnoff’s career prepared her well to become the first woman to head up the venerable Warner Bros. studio, she said. Before joining the studio, she was president of BBC Studios Americas, where she was responsible for driving growth and profit across the United States, Canada and Latin America. She oversaw L.A. Productions, linear and digital program sales and co-productions, home entertainment and licensing. She also led efforts to amplify BBC Studios’ global brands “Doctor Who,” “Top Gear” and the natural history brand “BBC Earth.” As board chair of the streaming service BritBox, Sarnoff guided the development and growth of the direct-to-consumer service, which offers U.S. and Canadian customers British television programming.

“My job at the BBC, I was the only executive that wasn’t sitting around a table in London, so I had to be a collaborator,” she said.

Stints at BBC and Nickelodeon helped her learn to work with “incredible franchises and IP,” she said.

Building out the franchise at Nickelodeon “has served me very well to this day” as she has the responsibility for driving such franchises as “Harry Potter” and the Wizarding World, “Game of Thrones” and the DC Universe, she said.

“We started thinking about what we could do for our DC fans this year,” she said of the superfan event the company launched virtually in September.

Called “DC FanDome: Explore the Multiverse,” the 24-hour event allowed fans to create and control their own viewing experience from more than 100 hours of on-demand content from television, films, comics, games and more — highlighting the work of more than 500 artists, writers and other talent from around the globe.

“We were able to connect virtually and celebrate the amazing movies we have coming out … as well as our TV shows,” she said, noting Venus Williams designed a whole line around Wonder Woman 1984.

Increasing diversity is another aim at the studio, she said.

“It’s a huge issue for me,” she said. “I’ve tried to blaze trails my whole career.”

She recalled having to conform to a male culture in an early job, hiding “female characteristics.”

“In terms of being a woman in this industry, it hasn’t been easy,” she said.

She says it’s a danger to have a “homogenous corporate culture where people are kind of finishing people’s sentences.”

A diverse workplace pays dividends, she said, adding that she learned from female colleagues to “get a seat at that table and make a difference.”