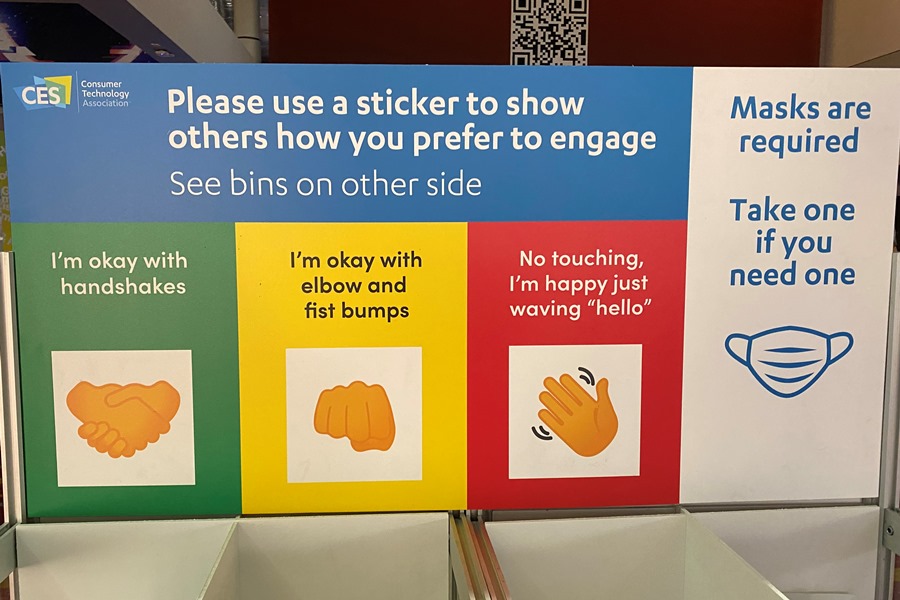 Ever since I arrived in Las Vegas on Monday, I’ve been curious as to how CES 2022 would turn out. The COVID curse led to calls for cancellations, but the Consumer Technology Association (CTA), which produces the annual show, vowed to press ahead, albeit with strict health protocols.

I walked to the show from my $32 room at the Sahara, an easy mile-long stroll along Paradise Road. Nearing the venue, everything seemed business as usual. A fast walker, I passed by at least a dozen other show-goers, easily identified by their badges (around their necks) and dark sport coats. I also saw a caravan of taxis heading toward the show. And just before I got to Convention Center Drive, I saw that the Spring Hill Suites by Marriott was charging $30 for “event parking” just as they always do.

Approaching the entrance, the crowd seemed a little light, but not by much. I went through security and entered the concourse. On one side were bins of show dailies; on the other, a rack with free masks and stickers: green, yellow and red. Over the three bins — one for each color — was a sign that read, “Please use a sticker to show others how you prefer to engage.” Green stickers implied “I’m okay with handshakes”; yellow stickers, “I’m okay with elbow and fist bumps”; and red stickers, “No touching. I’m happy just to wave hello.”

I chose red — not so much because of COVID but because I’ve long felt that handshakes were an antiquated form of greeting (show me your hand so I know you’re not carrying a weapon!), while fist and elbow bumps are just silly. I also grabbed a couple of extra masks, since the one I was wearing smelled a bit like the chorizo chilaquiles I had just had for breakfast at the Sahara.

Entering the Central Hall, I at first thought LG Electronics, whose exhibit was front and center, hadn’t yet set anything up. There before me was a vast corkboard floor, sprinkled with little stations with QVC codes. I soon realized that LG was attempting to bridge the physical and virtual worlds by offering visitors a series of virtual presentations right there on the physical show floor, from a press conference to CES Innovation Award wins to a history of the company’s signature, and immersive, OLED Experiences at past CES shows, including the 2017 tunnel, the 2018 canyon, the 2019 waterfall and the 2020 wave.

Unfortunately, it didn’t work for me, neither figuratively (come on, corkboards?) nor literally (who’s got time to download an app and then follow a bunch of instructions to get video footage from earlier shows — isn’t that what YouTube is for?).

The rest of the show floor demonstrated CTA’s commitment to health protocols, such as wider aisles, some of them with one-way arrows, and social distancing. The arrows were disregarded by most attendees; social distancing was hit or miss. Some of the biggest exhibitors, including Sony, Panasonic and Samsung, set aside a good-sized chunk of their exhibit space for open areas with wide-apart seating. Others, including Hisense and TCL, had no discernible changes to their booths from prior years.

The big buzz on the home entertainment front was Mini-LED TVs, which everyone seemed to have. I also noticed quite a few CE companies were targeting specific groups with their TVs, including Hisense and TCL, both of which showed off TVs specifically geared toward gamers.

Early in the morning, our editor in chief, Stephanie Prange, challenged me to find a single 4K Ultra HD Blu-ray player.