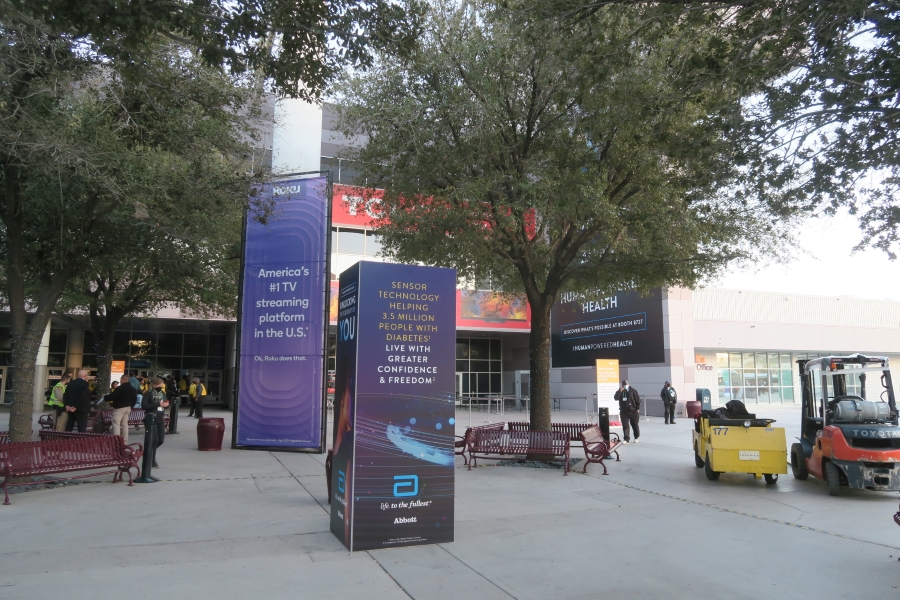 The main entrance to CES 2022 at the Las Vegas Convention Center on Tuesday evening, the day before the show's Jan. 5 opening (MPN staff photo).

LAS VEGAS — CES 2022 officially opens on Jan. 5 with a smaller footprint and a shorter run, three days instead of the usual four.

The culprit: The surge in COVID-19 cases, which the week before Christmas saw 42 exhibitors opt for a virtual rather than a physical presence, including such heavyweights as Amazon, AT&T, Google, Intel, Lenovo, Microsoft, Meta (Facebook) and T-Mobile.

Speaking on the eve of the show on the Fox Business Network’s “The Claman Countdown,” CTA CEO and president Gary Shapiro provided an update on the exhibitor count, which after a record high of 4,400 in January 2020 was expected to fall by more than half, prompting the closure of the South Hall at the Las Vegas Convention Center.

“I’m pleased to share with you now the new number, which is actually an expanded number,” Shapiro said. “A few weeks ago we were saying 1,700, now we’re over 2,300 exhibitors. They keep signing up; we’ve had lots in November and lots in December. And why is that? Because this is one place a lot of companies rely on each year to get their message out and they really didn’t have that in 2021. You know, there’s been a huge amount of investment in startups lately.”

Shapiro said he and his team decided to proceed with the physical show because “companies rely on it. Last night we had our CES Unveiled, [with] hundreds of startups out there and other companies. And I was overwhelmed by the number of people just thanking me. Saying, look — with tears in their eyes — we wait for this all year. Please go forward.

“Plus we heard from the countries that are sending people and companies for the first time from Eastern Europe, from Asia. Korea has a record number of startups coming, France has a huge number, Netherlands has a record, Italy has a record. All over the world, they’re coming, converging on Las Vegas in a reasonably safe way to see what they could do for the year because that’s what innovation is about.

“Now, this show will be a little messy, we know that. But innovation is messy.”

One thing that hasn’t changed is the show’s increasing focus on technology and innovation instead of its legacy consumer electronics. This shift was affirmed in November 2015 when organizers changed their name to the Consumer Technology Association from the Consumer Electronics Association.

During the CTA’s 2022 Tech Trends to Watch presentation, one of two media-only events held prior to the show’s opening, CTA VP of research Steve Koenig said the big trends to watch, and the focus of this year’s CES, are transportation (from electric vehicles to micro-mobility); space tech; sustainable technology; and digital health.

Similarly, among the new products on display at CES Unveiled, the annual media preview held right after the tech trends presentation on Jan. 3, were a smart mirror from Baracoda Daily Health that includes personal health data and makeup tutorials; the Megane X virtual reality, from Panasonic subsidiary Shiftall, for metaverse experiences; the VTOL Platform drone from VETAL, with 4G and 5G capability; and a home urine test kit from Vivoo that provides users with personalized nutrition and lifestyle advice.

“There’s over 100 health-related technology exhibitors. And we have the automobile areas — one of the biggest footprints we’ve ever had. Smart homes, robotics, you name it.”

Held under the theme, “Together for Tomorrow,” the keynote showcased sustainability efforts and demonstrated customized and connected experiences Samsung says can enrich people’s lives.

Last week, CTA announced the show will close one day early, “as an additional safety measure to the current  health protocols that have been put in place for CES.”

Those protocols include requiring all attendees to be fully vaccinated with a vaccine approved by the Food and Drug Administration (FDA) or World Health Organization (WHO), and to provide proof of their vaccination status prior to picking up their badges.

In addition, masks are required at all indoor CES events, including the show floor, and on shuttle buses. The CTA has “safety ambassadors” stationed throughout the exhibit floor, handing out masks to those who may need one.

In addition, the CTA is encouraging all attendees to take a COVID test prior to arriving in Las Vegas. The CTA is distributing complimentary Abbott BinaxNOW COVID-19 Self Test kits, provided by Abbott, to each attendee upon retrieving their badge. The CTA also will provide testing for those experiencing COVID-19 symptoms while at a CES venue, and will distribute free RT-PCR tests for attendees who are traveling back to their international destination and who require a test to travel.