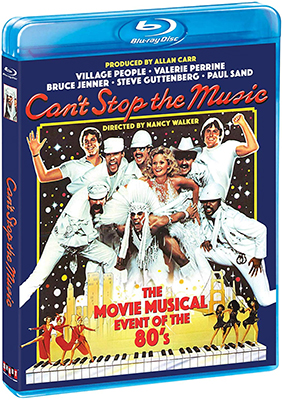 Around the time mainstream movies belatedly began paying heed to the “Gay Zeitgeist” (now there’s a rock-group moniker in the making), feel-good Can’t Stop the Music was shooting on location very close to where William Friedkin’s sordid Cruising was doing the same. Feel-good or not, as things turned out, you can’t say that ‘PG’ Music made its investors feel all that invigorated — any more than the Friedkin picture could be sold as anyone’s mainstream movie at a South Bucyrus multiplex, despite United Artists giving it a release.

The compatibly teamed writer-comic Bruce Vilanch and filmmaker Jeffrey Schwarz (The Life and Times of Allan Carr) make a point of this ironic production coincidence a couple times on the commentary for Shout! Factory’s Blu-ray premiere of what one can confidently assume will be the only screen teaming of Bruce Jenner (well, back in the day) and The Village People. But speaking on a camp level, it’s just as instructive to note that Music opened only a month after The Gong Show Movie, which had its own approach to synergistic casting: TV holdovers Jaye P. Morgan and the Bait Brothers but this time in 1.85:1. For those who gaze at current-day marquees and lament the preponderance of superhero movies for latently developed boy-men and coffee table fare for the blue-hairs, this match-up shows that there was an absurdly titillating time when the movies really did offer more than “a choice, not an echo,” as the Goldwater Republicans used to say. Call it a different kind of diversity.

Producer Carr was coming off Grease-on-screen plus several movie-marketing triumphs behind the scenes and was thus seen as one who had all the box office answers of the day. Uncredited Vilanch, who was the project’s first writer, recalls how a litany of actresses starting with Jacqueline Bisset kept turning down offers to be Music’s female lead. And they’d do this after the script had been refashioned (again) to their specific personas —to such a degree that you almost got the sense that Maria Ouspenskaya would have gotten her shot had she still been alive. In the end, Valerie Perrine took it on when just six years earlier, she’d gotten a deserving Oscar nomination for Lenny.

This, perhaps, should have been a hint that Music’s disco DNA ultimately might prove to be a commercial liability by the time it tried to beckon fickle audiences. Another eyebrow-raiser was Comiskey Park’s notorious 1979 “Disco Demolition Night,” which occurred as the picture was shooting. It, of course, remains a National Pastime catastrophe as riotously indelible as 1974’s Cleveland Indians “Ten Cent Beer Night” (or, “Cuyahoga Drunks Storm the Field”) as we approach the Comiskey 40th anniversary next month. To the chanting of “Disco Sucks,” thousands of fans tossed disco records onto the groundskeeper’s best work between games of a Chicago White Sox-Detroit Tigers double header — eventually storming the field after a monsoon of 45s and LPs had been literally detonated and exploded by Chicago shock-jock Steve Dahl. I was working in Detroit at the time and feared that Tigers co-announcer George Kell (a Hall of Fame third baseman) was going to have a stroke right in the booth.

Be that as it may, here’s what (few) paying customers saw in 1980 and what they’ll see again on the Blu-ray of this almost inevitable cult movie (thanks to, of course, the passage of time). First off, we get Perrine as a professional model with a brotherly thing going with Steve (“Direct from the Weight Room”) Guttenberg — the latter’s first major role, though he’d previously played a murder victim in The Boys From Brazil. This time, he’s a songwriter with a rich mom (June Havoc, the real-life “Baby June” from Gypsy); perhaps this is the time to note that Music has quite a smorgasbord cast.

The lad dreams of mounting an album and who knows what else, given the character’s somewhat vague sexuality, though our best guess is that he’s simply a guileless innocent calculated to appeal to all those ‘PG’ family audiences who possibly got ambushed by seeing Perrine frolicking naked in a bubbly pool with the Village People. Entering the picture, direct from Squaresville, is lawyer Jenner, who’s also involved in getting the People’s act off the ground. He also has rich parents (Barbara Rush is mom), though only at the movie’s end do both mothers’ mad-money reserves turn into a GoFundMe account during their offsprings’ otherwise desperate financial straits.

This is one of those movies where somebody always knows somebody who knows somebody can help realize this kind of impossibly lofty goal in a relative snap. Were this a picture where Guttenberg wanted to blast off to the moon in a homemade rocket from the top of his apartment, someone in the cast would have an uncle who used to clean the boiler room at NASA, and after an hour of screen time, Steve would be in orbit. To be sure, 1980 was a long time ago — Rubik’s Cube and Post-It Notes both launched that year — but this kind of Mickey-Judy premise wasn’t going to sell even then, at least with leads who had no flair for light comedy.

On the other hand, how do you put a price on seeing the Village People naked and immersed in suds during the “Y.M.C.A.” locker room/shower montage? (Say, all you ‘PG’ kids, isn’t this more fun than watching “The Jetsons”?) Or Rush and Havoc joining the rest of the cast in a bop-out to the title tune at the end? Or having Jack Weston improbably show up out of nowhere? (As Vilanch notes, “Carr filmed his Rolodex” here.) Or noting the ‘A’-list talent helping out director Nancy Walker, including Bill Butler (Jaws) as cinematographer and Theoni V. Aldredge for some of the costuming? So is this what it took to deliver what the Blu-ray box art still calls “The Movie Musical Event of the ’80s”? Let’s just say that it’s a good thing the ad department added the “Movie” qualifier to the copy because, otherwise, Bruce Springsteen might have been hacked. Besides, Xanadu was waiting in the wings; it opened later that same summer.

The Village People’s Randy Jones gets interviewed in this release’s bonus section, and he seems beyond grateful for the experience, which was a way for an ADHD kid (and I empathize there) to find his place. Vilanch is surprisingly restrained on the voiceover but is unusually first-and-informative because he observed a lot of the production from both inside and out. Whenever his memory infrequently falters, co-commentator Schwarz manages to be fairly encyclopedic in terms of his overall knowledge.

Vilanch says that when he finally saw the movie, it was in a regular theater with Bette Midler, who turned to him and said (despite her liking for Carr), “I can stop the music.” Seeing this kind of movie with Midler is indisputably cool, so let me take the opportunity here to note that Bruce (Vilanch, that is, not the Neo-Caitlin in any form) are old college newspaper buddies, and that back in 1968, I saw Barbarella first-run with him. In fact, he talked me and a couple other fellow college newspaper scribes into huffing our way up the Midwest aisle at its conclusion and stage-whispering “shocking” and “outrageous.” This is a theater that had previously played Mary Poppins for six months, followed by a year-and-a-half run of The Sound of Music (aka Can’t Stop the Germans).