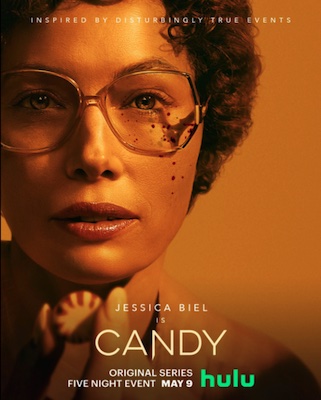 This true crime drama follows the story of Candy Montgomery, a 1980 Texas housewife and mother with a good husband, two kids and a nice house who also seems to be a cold-hearted ax murderer.

Portraying incidents before, after and during the death of her “friend” Betty Gore — not in any chronological order — the series unveils Candy’s secrets slice by slice, like a potluck pie, but ultimately leaves her somewhat of a fascinating enigma, prompting viewers to ponder the question: Does anyone really know the housewife next door?

While many true crime dramas play it straight, Jessica Biel’s portrayal of Candy leans toward the satirical, reminiscent of Nicole Kidman’s turn as the naughty, husband-murdering teacher in To Die For. This is a woman who can wield an ax to kill before lunch and help out with a smile at the church Bible school after. The facade of suburban homemaking chatter and activity contrasted with the gory murder and the ugly secrets behind it make for some very dark humor. Biel’s husband Justin Timberlake makes a supporting appearance as a cop investigating the crime as does Jason Ritter, the husband of Melanie Lynskey, who portrays Betty, further adding to the sardonic tone.

Lynskey’s aggrieved and doomed Betty comes off as such a milquetoast whiner that her murder seems almost deserved — though the actress gives her a despondent gravitas. Her ghostlike appearances toward the end leave us wanting a bit more verve, but then maybe Betty doesn’t have it in her.

Candy, on the other hand, is engaging, funny, sexy and exciting, the kind of gal you’d like to have over for gossip. Amongst the supporting players in the churchgoing, backyard-barbequing, casserole-baking neighborhood, Candy’s a star.

Depicted in all her sickly sweet and horrifyingly sour glory, Biel’s Candy makes suburban murder very entertaining — though we learn little about what really drives her. At the end of the story, she is still a mystery. And perhaps that’s the point. Candy is somewhat of a facade. What goes on behind the face she shows the world is unknowable. What’s clear is that we don’t know the whole truth.

In Hollywood, nothing succeeds like imitation, so viewers will get another chance to delve into this character. Elizabeth Olsen is set to take her turn playing Candy in yet another adaptation for HBO Max. She’ll have a hard act to follow.