On the heels of British entertainment retailer HMV’s second time into administration (a form of bankruptcy), trade group British Association for Screen Entertainment (BASE) has issued an impassioned plea for the survival of packaged media.

When the His Majesty’s Voice retail chain, operating more than 120 stores in the United Kingdom selling DVD, Blu-ray Disc and music CDs, filed for administration on Dec. 28 – the second such filing in six years – executives cited a 30% year-over-year decline in DVD sales for the move.

BASE, in a statement, said the percentage decline was misleading, and in fact, represented a single week on the British charts when comparing the 2017 retail release of Warner Home Video’s highly touted Dunkirk.

“HMV is a key player in physical sales across TV, comedy and special interest genres, allowing consumers to browse the remarkable breadth and depth of titles showcased in-store,” said BASE.

“Standout titles consistently achieve great DVD sales results; in December, Mamma Mia! Here We Go Again sold over 1 million DVDs in less than a month, the first title to do so in five years since Despicable Me 2 [both Universal Pictures Home Entertainment] in 2013.”

The group said retail still offers the best avenue for impulse purchases of movies and TV shows. Indeed, 20% of home video consumption in 2018 was done on impulse, contributing £70 million ($90 million) to the market. BASE said 30% impulse buys of packaged media occurred at HMV stores.

Analyst Kantar Worldpanel reported that in-store sales accounted for 60% of all spend over the year, and research conducted by Vista found that 81% of UK consumers continue to see the physical store as vital to the shopping experience.

“Impulse purchases add significant value to the physical market, and HMV, accounting for one in three impulse entertainment buys, plays a huge role,” Ian Foster, managing director, NBC Universal, said in a statement. “For this, and many other reasons, HMV’s place on the high street is vital for the category and we are very keen to see a positive outcome.”

BASE said HMV and brick-and-mortar retail have contributed to 4K UHD Blu-ray sales accounting for 13% of BD sales, with Blu-ray now representing 24.3% of the total physical disc market value.

The group said the potential customer base for 4K content continues to grow, with Futuresource Consulting projecting a UHD TV installed base of 8.5 million households and 2.2 million capable 4K Blu-ray players across the U.K. at the end of 2018.

Indeed, 41% of U.K. shoppers went to a store specifically to buy 4K Blu-ray titles, compared to 27% for Blu-ray titles in general.

“The growth of 4K UHD within the market has helped increase the average price paid for a Blu-ray up to £14.21, a year-on-year increase of the average Blu-ray selling price of 5.3%, attesting to the fact that consumers are willing to invest more in a high-quality home entertainment experience,” said BASE.

The group said that despite media reports suggesting younger consumers largely covet digital and streaming video services, the demo still purchases video content on physical formats. Citing Kantar Worldpanel data, 18.4% of 16-24-year-olds bought a disc in 2018, and 16-25-year-olds accounted for 11% of all disc consumption, which was equal to 2017.

BASE said that since news of HMV’s administration broke, there has been a “groundswell” of affection for packaged media on social media and op-ed pieces.

“Personal accounts of outstanding service, recommendations from knowledgeable staff members leading to new favorites in music and film, as well as accidental finds in the store’s extensive catalog highlight the true value of HMV, with experiences that cannot be replicated via online purchasing,” said the group. 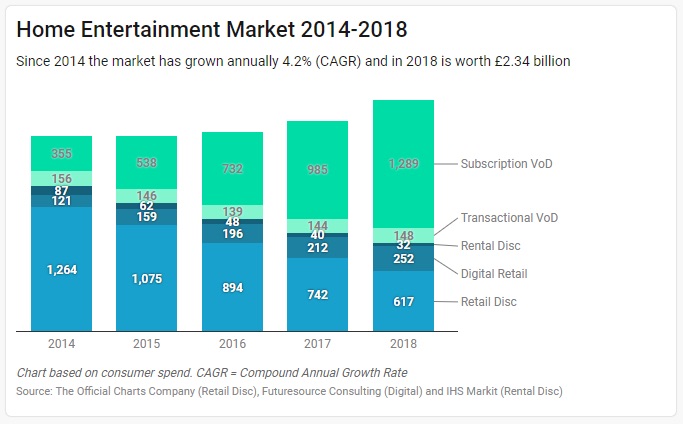