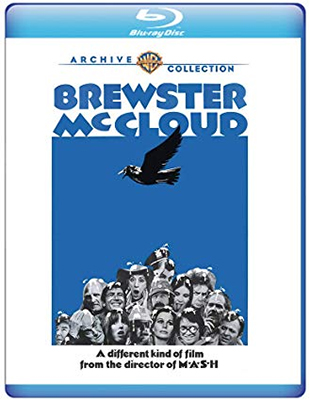 Director Robert Altman’s oddball Brewster McCloud has attained something of a cult status for its darkly comic tale of a boy living in the Astrodome who plans to escape with a birdlike contraption as Houston is besieged by a series of weird murders.

Sandwiched between two of its era’s landmark screen achievements — MASH and McCabe and Mrs. Miller — Robert Altman’s Astrodome fantasy Brewster McCloud is an oddball even by his standards, which indeed could get mighty eccentric on occasion, though this was more of a factor from the late 1970s until 1992’s comeback with The Player.

One has to wonder what then MGM chief James “The Smiling Cobra” Aubrey — with his background in the enormously popular but predominantly mega-crappy hayseed programming from his eventually stormy CBS tenure — really thought when he was plunking counter-culture-ish Brewster into 1970’s year-end holiday season (I saw it opening night in New York City, just before Christmas). Not that signs were all bleak: At year’s beginning, in what I’m sure was anything but an isolated incident, I had seen MASH get perhaps the deepest belly-laughs from a Saturday-night packed house that I have ever seen in my life (seeing the climactic football scene in a raucous football town was an off-the-charts experience). And now here was either the critic for Time or Newsweek (I forget which) stoking hopes by proclaiming that with his first follow-up, Altman had just become the first person ever to hit one out of the Astrodome.

Well, hardly. But in its defense, the movie, whose remastered Panavision visuals are easily up to Warner Archive standards, has mellowed, probably forever, into a solid double until it more or less gets picked off in late innings. And even then, it’s partially saved by a delightful end credits extravaganza, capped by one of the most uproariously twisted final shots in screen history (assuming you’re twisted as well). For a while, few qualifications are needed because the first half or more is real-deal Altman despite his having to work a script by Doran William Cannon, who not long before had penned Otto Preminger’s … Skidoo. (I can just hear someone saying to Aubrey: “Jim Baby, we know you spent all those years pandering to the Cotton Mather demographic with ‘Petticoat Junction’ and all that, but we’re hitting in the Bigs now, and we’ve got the same screenwriter who set the table for your old network colleague Jackie Gleason to drop acid on screen.”)

Skidoo also serves up Carol Channing in her underwear — easily as mind-bending as watching Ralph Kramden see electric pictures — but let’s not go there. So getting back to Brewster, the premise is this: Bud Cort’s Brewster lives in the Astrodome as he prepares to fly out of it via a constructed contraption, all under the influence of Sally Kellerman’s borderline incestuous mother figure (who once may have been a bird herself) adamantly urging the lad not to compromise his goals by indulging in sex with willing young women. So let’s see: Did I leave anything out? Oh, yeah: Houston has just called in ace San Francisco detective Frank Shaft (Michael Murphy) to crack a series of local murders whose corpses are all splattered with bird doody. What I wouldn’t give to see Jack Webb handling the interrogations.

Given all this, most people will have an idea from the description if Brewster is a movie for them, but thanks to a cast of familiar Altman casting collaborators — and this was Shelley Duvall’s screen debut — there are many chuckles along the way, most of them aimed at the idiots who populate its large cast of characters. One performer who was decidedly not an Altman stock company regular was Margaret Hamilton herself, cast as a wicked witch (in spirit, anyway) who shrieks the national anthem at Astros games while badgering the band whose uniforms she’s bankrolled. One can only imagine what she thought of her surrounding sound anarchy after having worked with Ray Bolger, but her Daphne Heap character is the first casualty here and thus isn’t around long, though the capper gag to her demise is one of the movie’s best and a must for Wizard of Oz completists.

An added high point is Murphy (another Altman regular) finessing a first-rate parody of Steve McQueen in Bullitt, down to the bluest eyes that Metrocolor can covey and a drawerful of high-end turtleneck sweaters in a wide array of pigments to make him look cool while burning rubber on the road. Another is MASH’s G. Wood (why didn’t he have a better career, and why didn’t Altman use him more?) as a cantankerous Houston police captain who resents Murphy and is generally as dyspeptic as Wood’s general in Altman’s greatest of all service comedies — a role he later repeated in the hit watered-down TV version, for which Altman had no use. Plus Bert Remsen as a cruelly loathsome wife-beating narc (even Wood hates him) whose young son’s skin problems appear to clear up overnight once dad joins the ca-ca’ed-corpse club. And Rene Auberjonois as a bird lecturer to whom the movie keeps returning, only to find him incrementally taking on the appearance of his subjects. Also Stacy Keach in a ton of latex makeup as a miser right out of Dickens; he gets his, too.

Altman fares less well with the women, aside from Kellerman’s casting perfection as the best-endowed ex-avian imaginable. Poor Jennifer Salt, in an impossible role, is a complete bust as a hot-for-Brewster apparent nympho who orgasms just by thinking of him, while the director hasn’t yet figured how to get the best out of Shelley Duvall (an actress I never “got,” though she has too many impressive credits for me not to give her her due). And, yeah — a big car chase in a Bullitt parody would have been de rigueur in 1970, but Altman can’t really figure out a way to do a novel one, and slow-motion to mickey-mousing music isn’t the answer). And yet: It has to be said that its capper gag is another one that arguably attains classic status, and that’s the thing: Just when you’re about to bail on the movie, something happens that is beyond the creative capability of normal, mundane minds.

Taking this further, I think a few minds might have gotten expanded during the filming of what ultimately had to settle for becoming a cult movie. Or to put it another way, per his well-known reputation, I don’t think it was oregano that Uncle Bob was smoking on the set when he shot this. Well, kids, it was a heady time. The same half-week, MGM also released Paul Mazursky’s hippy-dippy Alex in Wonderland, which was so “Fellini-esque” that Federico Fellini was actually in it. On balance, I think Alex comes closer to being a success (however qualified), due to Ellen Burstyn and its spot-on satire of Hollywood in the Vietnam era when no one had even a clue of what might cut it at the box office. Either way, Aubrey had to be thinking that there wasn’t as much to wrap his mind around when he was pushing The Lucy Show and Mayberry spin-offs. And though it’s just a guess, it’s unlikely Aunt Bea ever badgered some stagehand to score her a lid.