The action thriller Breaking In will arrive as an unrated director’s cut on digital (including Movies Anywhere) July 24 and on Blu-ray combo pack, DVD and On Demand Aug. 7 from Universal Pictures Home Entertainment. 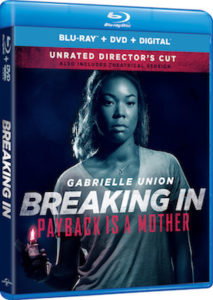 In the film, a mother (Gabrielle Union), locked out of the house by a group of ruthless intruders, must summon every bit of her strength and smarts to save her children who are trapped inside. Directed by James McTeigue, the film also stars Billy Burke, Ajiona Alexus (“13 Reasons Why,” Acrimony) and Seth Carr (Black Panther).

The film earned $42.4 million at the domestic box office.