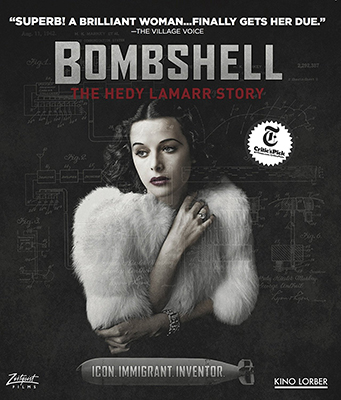 Direct from its 96% Rotten Tomatoes huzzahs (and you’d have to be a real prune not to take to it), Alexandra Dean’s Bombshell: The Hedy Lamarr Story deftly walks the dividing line between chronicling the actress/raving beauty’s screen career and — now much more notably — the scientific achievements for which she’ll ultimately be remembered.

A little chilly on screen for my taste — though an excerpted clip here seems to bear out memories of her being better than respectable in King Vidor’s H.M. Pulham, Esq. — Vienna-born Lamarr was initially best known for the once scandalous Czech film Ecstasy from 1933 (in which she frolicked naked and even simulated an orgasm) and for being Charles Boyer’s co-star mannequin in 1938’s Algiers (say, why don’t there seem  to be an even average print of this, anywhere?). But post-breakthrough, even her more indelible landmarks were parody-bait. There was, of course, the top-billed role as Cecil B. DeMille’s Delilah opposite Victor Mature’s Samson in Lamarr’s one certified box-office blockbuster other than maybe MGM’s Boom Town — though it inspired Groucho Marx’s famous crack that he’d never go to a movie where the actor had bigger breasts than the actress. And there was her “I Am … Tondelayo” introductory hello in MGM’s camp-fest White Cargo ( there’s a TV clip here of Lucille Ball sending it up).

No wonder, then, that Lamarr took her real enjoyment from scientific “tinkering” that ended up reaping prodigiously significant rewards (but  belatedly — and not to her), offering a lot more satisfaction than a patronizing “know-your-place, honey” Hollywood and, to be sure, six husbands. The successful conversation-stopper of her experiments, intended for World War II usage, is the patent she and composer/lab partner George Antheil got for the technology — inspired by what a player-piano does — meant to prevent jammed frequencies from imperiling the trajectory of Allied torpedoes. The military sat on it, later utilized it as standard practice after the patent may or may not have expired, and she never got a cent when, late in life, she needed a lot of them. Not exactly incidentally, this is also the technology that later led to Wifi and Bluetooth. So when I’m out on my deck and under BOSE wireless headphones listening to Bill Evans play Polka Dots and Moonbeams, I should say, “Thank you, Hedy.”

Accessibility may not be everything, but it comes mighty close to being so in a doc biopic. To this end, filmmaker Dean has Lamarr’s three children (including one who was treated shabbily, though he seems philosophical about it); her biographer Richard Rhodes (whose Pulitzer merely came from writing The Making of the Atomic Bomb); the universally revered film historian/academic Jeanine Basinger; the late Robert Osborne, in what is said to have been his last interview; and even Mel Brooks, who got sued by the actress (who seems to have had a strong litigious streak) for naming Harvey Korman’s character in Blazing Saddles “Hedley Lamarr.”

There’s no shortage of movie clips here, though missing is anything from swan song The Female Animal (1958), in which she plays, of all possibilities, Jane Powell’s mother (the movie is quite the curio because it’s Powell’s final movie as well). Surprisingly, there was a 15-year age differential between them, but this still wouldn’t have made Lamarr feel too great or secure — for as much as she disliked the industry’s all-too-common treatment of her, she did seem to have a taste for glamour. Though she did live long enough (to 2000, though barely) to experience the early innings of scientific recognition, she felt the money squeeze due a failure of income to materialize from any source. Glamour may have been kind of a last grasp.

There were a couple of shoplifting busts, though these likely stemmed from the unstable behavior that nearly every celebrity displayed when their attending physician was Max (Dr. Feelgood) Jacobson of amphetamine notoriety. (As in: “Gee, doc, your miracle vitamin shots are really giving me that same fountain-of-youth feel that they gave Eddie Fisher.”) There were also needless nips, tucks, lifts or whatever specialists of all capabilities do that bring to mind those awful tabloid front pages you see in grocery store lines devoted to botched plastic surgeries. The last is apparently what kept Lamarr from basking in tribute to her scientific work at a ceremony that at least had one of her sons acting as a stand-in — though there’s a surprising amount of home movie footage where she allowed herself to get within the camera’s eye. In audiotaped interviews, though (and there are quite a few here), she comes off as warm, polite, intelligent and sincere in the give-and-take.

At least there was a happy ending — at least in terms of justice and posterity, if not personal payoff. Though the comparison ends quickly when it comes to nourishing feedback, Lamarr was like Ronald Reagan in that she had one of the more interesting lives of the 20th century. When Criterion brought out Ingrid Bergman: In Her Own Words in 2016, I remember thinking that it was a going to be a long time before anyone gave that one a run for its money as a revelatory actress portrait. Overall, I prefer that doc, but Dean gives it a run for the money.