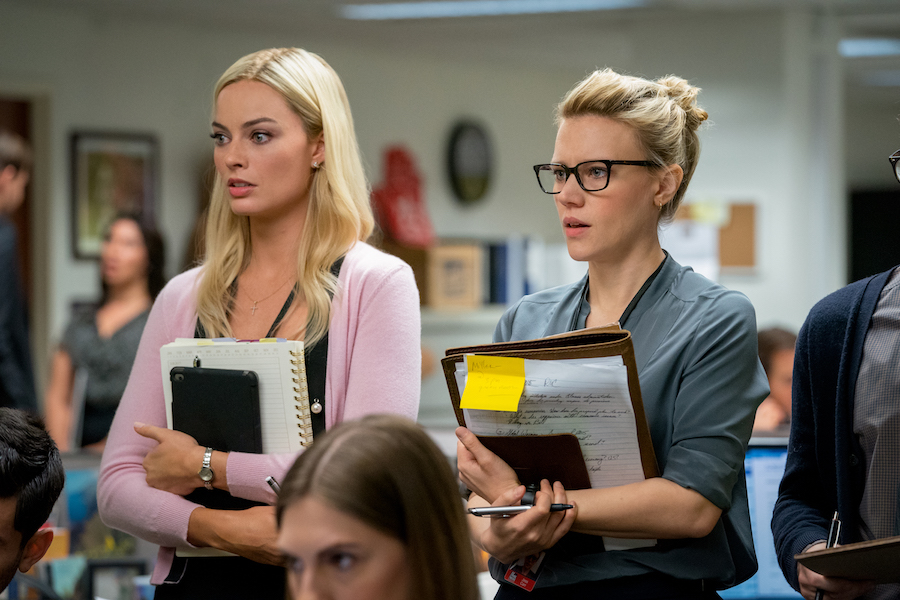 The three acclaimed actresses are at the center of the Oscar-lauded film based on the real story of ambitious, strong women who anchored one of America’s most powerful news networks, Fox News, becoming headlines themselves when they risked everything to stand up to the man who made them famous, Roger Ailes.

Theron, who also produced the film, notes in the disc extras it was “a great opportunity for a lot of talented women to come together and tell an important story.”

“It was lovely to be able to join forces with these women and hopefully inspire people to say, ‘I don’t need to put up with this,’” adds Kidman.

Bombshell is a candid exploration of the sexual harassment scandal that brought down the powerful Ailes. Theron plays Megyn Kelly, an anchor at the height of her power. Kidman is Gretchen Carlson, the former anchor who sues Ailes, bringing the harassment to light. Robbie plays up-and-comer Kayla Pospisil, a fictional, composite character based on other individuals.

The three women appear in only one scene together, which proved to be one of the most striking in the movie. A scene in which they ride in the same elevator with little dialog was not originally in the script, but it turned out to be so impactful that it provided a key image for the film’s teaser.

“It was great to be able to have a scene with almost no dialog that still says a lot,” Kidman says in the extras.

“We don’t say anything to each other, and I think that’s the whole point of the scene, that we do not reach out and in a way our problems are unresolved because we have isolated ourselves,” adds Robbie.

“Charlize, Nicole and Margo are, well, a dream team,” says John Lithgow in the disc extras. Lithgow plays Ailes and made a point of telling the women in the film he was going to have to be nasty to them in the role.

Despite playing the villain, Lithgow brought complexity to the character.

“He never shied away from the fact that this guy Roger Ailes was incredibly charismatic and that people loved him,” Theron notes.

“What I look for always in playing a bad guy is a sort of core of insecurity, what in the world makes them that way, how do you show the fact that he may do bad things, but he hates doing them,” Lithgow explains in the extras.

One of the most emotionally wrenching scenes in the film takes place between Lithgow as Ailes and Robbie’s Kayla as she slowly becomes aware of his abusive intentions.

“The man is in the grips of his own compulsions, and he hates himself for it,” Lithgow says in the extras.

While the actors had a firm grip on the inner life of their characters, transforming them to resemble their real-life counterparts also added to the drama, winning makeup and hairstyling creators Kazu Hiro, Anne Morgan and Vivian Baker an Academy Award.

Detailed in the disc extras are the hours of work with prosthetics and makeup that it took to turn the actors into well-known personalities. Kidman wore chin and body enhancements as Carlson, and Lithgow wore six prosthetics and a body suit as Ailes. Theron, who listened to hours of interviews to mimic Kelly’s voice, wore nose plugs and cheek, eyelid, chin and nose prosthetics to replicate Kelly’s look.

“The look match was really important to her,” says director Jay Roach in the extras, adding she wanted to see herself in the mirror and not recognize herself.

“We ended up so close to Megan’s features,” Theron adds, crediting Hiro’s artistry.

An ensemble of accomplished actors, including Kate McKinnon, Connie Britton, Malcolm McDowell (as media tycoon Rupert Murdoch) and Allison Janney also joined in crafting a complicated but sharply told story that filmmakers hope will start a conversation — without preaching.

“I personally don’t want to go and watch a movie that I feel is preaching to me,” says Theron, who credits Roach’s comedy background in helping to bring realism to the film.

“You feel like you’re really there in the room with those people,” she says. 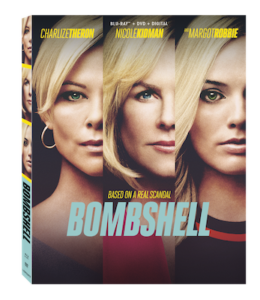 Blu-ray/DVD/Digital special features include the “No Easy Truths: The Making of Bombshell” seven-part documentary: