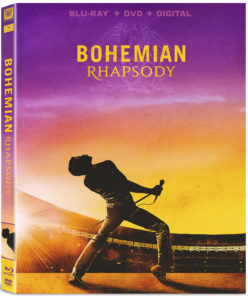 The much-ballyhooed biopic on the rock band Queen, Bohemian Rhapsody, is coming home.

The film – a celebration of Queen, their music, and lead singer Freddie Mercury (portrayed by Rami Malek) – was a surprise box office hit for 20th Century Fox, with a domestic gross of $189.2 million and global theatrical earnings of $702.6 million.

The film will be released on digital Jan. 22, followed by a Feb. 12 release on DVD, Blu-ray Disc and 4K Ultra HD Blu-ray.

The home release versions of Bohemian Rhapsody include the complete Live-Aid movie performance, featuring two never-before-seen songs (“Crazy Little Thing Called Love” and “We Will Rock You”) that according to Fox are “packed into a 22-minute collective experience recreating the original event.”

In addition, on Blu-ray Disc and digital, fans will get a look behind the making of the film including interviews with Queen, the cast and creative team.