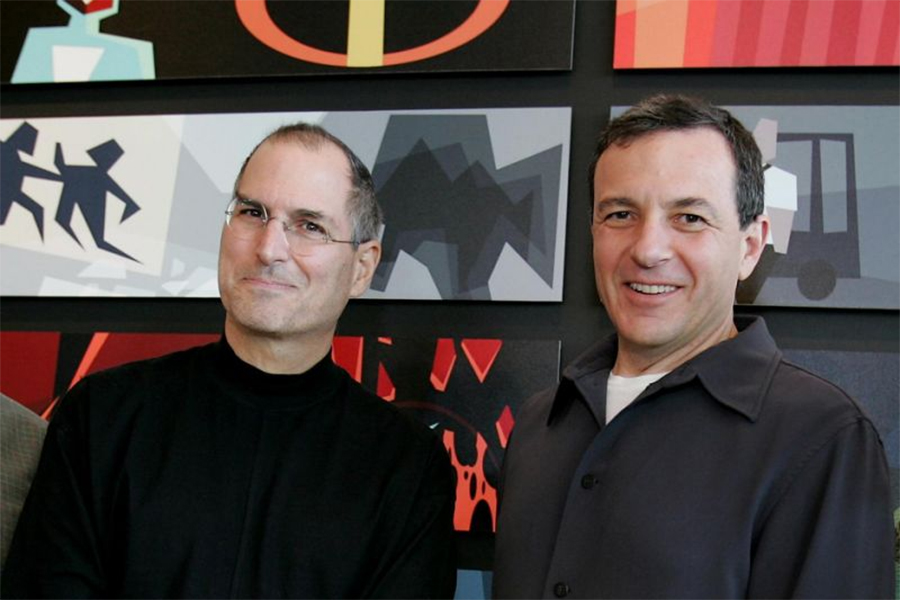 Pending retirement and 20/20 hindsight can do wonders for the printed page.

With his departure from The Walt Disney Co. set for 2021, CEO Bob Iger has already authored a memoir on his long-running stint heading the world famous brand.

The book, “The Ride of a Lifetime: Lessons Learned from 15 Years as CEO of the Walt Disney Company,” is available everywhere Sept. 23, including Amazon.

In excerpts disclosed on Vanity Fair’s website, Iger delves into his relationship with late Apple co-founder Steve Jobs and how he was stunned to find out 10 minutes before announcing Disney’s $7.4 billion acquisition of Pixar in 2006 that Jobs’ cancer had returned.

Iger suggests that had Jobs lived (he died in 2011), he believes — surprisingly — that the two would have facilitated a merger of sorts between Disney and Apple.

It’s an interesting revelation, if not unrealistic considering who Jobs was.

The mercurial executive was a majority shareholder of Pixar and a member of Disney’s board. He was also notoriously self-centered in his vision for Apple and the world revolving around it — not the other way around.

While fighting a return of terminal cancer (despite being one of the richest people on Earth) would cloud anyone’s judgment, when it comes to streaming video and content IP, Jobs’ insolence toward the emerging distribution model and owning content was glaring.

Despite pioneering music, TV show and movie distribution through iTunes, Jobs infamously dismissed Apple TV as a “little hobby,” to be re-evaluated in the distant future.

That attitude contributed to Apple (with more than $200 billion in cash) sitting on the sidelines as Iger-led Disney swooped in to buy Pixar, Marvel Studios and Lucasfilm (Star Wars) — the latter two properties for a combined $8 billion.

Disney has made more than $18 billion on its Marvel investment. The first four Star Wars movies produced by Disney-owned Lucasfilm have already paid for that acquisition. And Pixar’s Toy Story 4 is the fourth film from that studio to top $1 billion at the global box office.

It seems doubtful that had Jobs lived, Apple would have jumped into content ownership. Jobs’ successor Tim Cook has only now decided to push Apple TV into the SVOD ecosystem.

Indeed, Iger, in his book, said Jobs had grown frustrated dealing with the Disney culture and former CEO Michael Eisner.

“Among his many frustrations was a feeling that it was often too difficult to get anything done with Disney,” Iger wrote.

Yet, today Apple has ratcheted up original content, spending Netflix-like billions on programming featuring ‘A’-list talent such as Jennifer Aniston and Reese Witherspoon.

The move has generated headlines but comes as Disney, AT&T/WarnerMedia, Comcast and Viacom all bow separate and competing over-the-top video platforms.

Instead of being an innovator as it was with the PC, iTunes, smart phones and tablets, Apple is chasing the competition, a reality noted earlier this year by Netflix’s Ted Sarandos.

“We’ve been competing with 500 channels of cable and penetrated nearly every household in the world for a long time,” Sarandos told the media in March. “So, it’s the same stable of competitors [Apple, Disney, AT&T, Viacom]; just very late to the game.”

One thought on “Bob Iger: ‘If Steve (Jobs) Were Alive,’ (Disney, Apple) Would be Combined Companies”