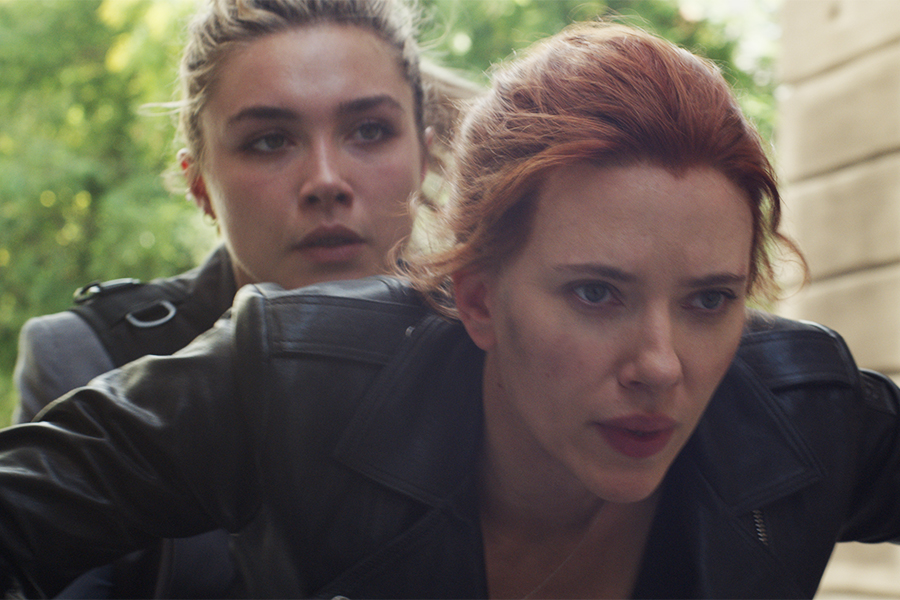 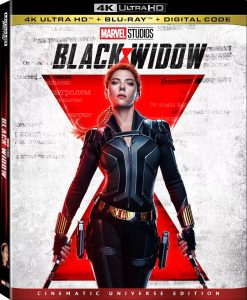 Black Widow, distributed by Disney, arrives on Blu-ray Disc, DVD and 4K Ultra HD Blu-ray. The spy thriller stars Scarlett Johansson as her “Avengers” character Natasha Romanoff, whose reunion with former colleagues forces her to confront a past she thought she left behind. The cast also includes Florence Pugh, David Harbour and Rachel Weisz. It is the top earner at the domestic box office so far in 2021 with $183.1 million and has $372 million globally, It was also available concurrently as a $29.99 Premier Access add-on to the Disney+ streaming service, a fact that led Johansson to sue the studio on the theory that the online release undercut the film’s box office, causing her to miss out on millions of dollars of potential bonus earnings based on the box office.

Two of animation’s top canine characters team up in Straight Outta Nowhere: Scooby-Doo Meets Courage the Cowardly Dog, a new, full-length animated family film now available on digital and DVD from Warner Bros. Home Entertainment. Produced by Warner Bros. Animation, Straight Outta Nowhere: Scooby-Doo Meets Courage the Cowardly Dog finds the teen sleuths in the town of Nowhere, Kan., where they meet Courage the Cowardly Dog. There they investigate what makes the backwoods hometown of Courage and his owners Eustace and Muriel Bagge one of the weirdest places on Earth. The canine colleagues sniff out a strange object, putting the team on the trail of a giant cicada monster and her winged warriors.

The documentary The Human Factor Sept. 14 becomes available for digital purchase, and on DVD and Blu-ray Disc from Sony Pictures Home Entertainment. With unprecedented access to the foremost American negotiators, The Human Factor offers a behind-the-scenes story of how in the past 25 years the United States came within reach of securing peace between Israel and its neighbors. The documentary, an official selection at the Telluride Film Festival, features Dennis Ross, Martin Indyk, Gamal Helal, Aaron David Miller, Daniel Kurtzer and Robert Malley.

The Chinese boxing-meets-mixed martial arts drama Crazy Fist arrives on Blu-ray, DVD and for digital purchase Sept. 14 from Well Go USA Entertainment. First time feature film director Guo Qing (who also appears in the film) directs Dragon Blade-alums Steve Yoo and Wang Wei, plus Collin Chou (Matrix II, III), Xiaoming Huang (Ip Man 2), Wei Zhao (Mulan: Rise of a Warrior) and retired professional bodybuilder Kai Greene (“Stranger Things”). In the film, after an opponent dies mid-match, a prominent MMA champion swore never to fight again, instead retiring to run his family’s international business. However, when his best friend dies under suspicious circumstances during another tournament, he has no choice but to step back in the ring to help uncover the truth.

The Shawshank Redemption debuts on 4K Ultra HD Blu-ray combo pack and digital Sept. 14 from Warner Bros. Home Entertainment. The 1994 film received seven Oscar nominations, including Best Picture, Best Actor (Morgan Freeman), Best Original Score and Best Screenplay, and marked the feature directorial debut of its screenwriter Frank Darabont, nominated for his adapted screenplay. Based on Stephen King’s novella Rita Hayworth and the Shawshank Redemption, the drama tells the story of Andy Dufresne (Tim Robbins), a prominent banker unjustly convicted of murder and sentenced to life imprisonment at Maine’s Shawshank Prison. He is befriended by longtime convict Red (Freeman) who’s been in long enough to know the ropes and helps him cope with the frightening realities of prison life.  As the two men grow closer, so does the sense of hope that can truly set them free.

CBS and Paramount Home Entertainment release Magnum P.I. — Season Three on DVD Sept. 14. A remake of the 1980s series, “Magnum P.I.” stars Jay Hernandez as Tom Magnum, an American hero and Navy SEAL returning from war who uses his military skills to become a private investigator in Oahu, Hawaii. Magnum lives in a guest cottage on Robin’s Nest, the luxurious estate where he works as a security consultant to supplement his P.I. business.

“The Ultraman” is the eighth original entry in the “Ultraman” series. This DVD collection includes all 50 episodes. In the animated series, across the planet Earth, strange glowing objects in the form of an unknown language appear in the skies. In order to investigate these strange phenomena, the Earth Defense Forces form the Science Guard Agency. The ninth original series is “Ultraman 80.” This 50-episode series follows Takeshi Yamato, a 22-year-old young man who lives a double life. During the daytime, he is a rookie but popular science teacher at a junior high school in Tokyo. But after school and on Sundays he works as a member of the elite UGM (Utility Government Members), an Earth defense organization that tackles difficult situations such as alien invasion and attacks from monsters.

The documentary Fish & Men comes out on DVD, VOD and digital sellthrough Sept. 14 from Virgil Films. Fish & Men explores the high cost of cheap fish in the modern seafood economy, and the forces threatening local fishing communities as well as the public health.

The horror film Companion will come out on on demand Sept. 14 from Level 33 Entertainment. In the film’s plot, in 2030, society fell as malicious entities appeared around the world. The survivors fight each other and the dead. In this landscape, Ella Grace’s burden of guilt is exposed. The past, and the horrors of what she will become, force Ella to kill what she loves in order to discover the terrifying meaning of the ghosts that feed on her fear.

Breaking Glass Pictures Sept. 14 releases The Influencer, a comedy thriller starring real-life social influencer and comedian Kasia Szarek (A24’s Pleasure) and Shantell Yasmine Abeydeera (Girls Like Magic, Dating in Place), on DVD and for digital purchase. From first-time director Meghan Weinstein, The Influencer is a tale that examines the life of a vain social media influencer named Abbie, who is known for her fashion, lifestyle, and makeup videos. She signs a coveted contract with Nutrocon, a cosmetic company known to pollute, test on animals, and treat female workers unfairly, and almost immediately she is accosted and tied up by a group of activists in her home. They force her to film a video advertising a mysterious new makeup kit, and as their plan unfolds, we learn the real reason for their visit and Abbie’s façade begins to fade.

Also this week, Warner Bros. Home Entertainment Sept. 17 will make director James Gunn’s The Suicide Squad available for premium digital ownership. Written and directed by Gunn, the film is based on the DC Comics series about imprisoned supervillains who are recruited by the U.S. government for covert operations, and have a bomb implanted in their heads that will explode if they don’t comply. A sequel to 2016’s Suicide Squad and the 10th film in the DC Extended Universe franchise, the film finds government agent Amanda Waller (Viola Davis) sending the team to infiltrate the island nation of Corto Maltese to eliminate a potentially dangerous weapon. Among the recruits this time around are Harley Quinn (Margot Robbie), the sharpshooter Bloodsport (Idris Elba), the jingoistic Peacemaker (John Cena), team leader Rick Flag (Joel Kinnaman), Polka-Dot Man (David Dastmalchian), Ratcatcher 2 (Daniela Melchior), and King Shark (voiced by Sylvester Stallone). The film will be released on Blu-ray Disc, DVD and 4K Ultra HD Blu-ray Oct. 26.