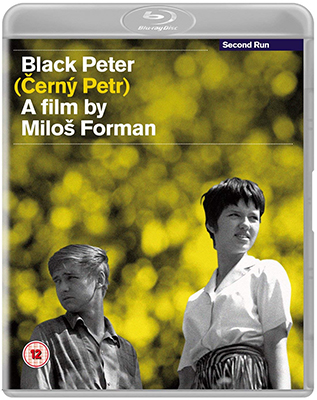 It’s only occasionally that celebrity deaths hit me really hard, but the passing of Jonathan Demme and then Milos Forman in successive years really did a bullseye number on where my movie self lives. I was lucky enough to interview both filmmakers (Forman twice), but this was only a contributing factor. There’s only been roughly a handful of times in my adult life where, after spending a mere three to four minutes with a contemporary filmmaker’s work — that is, for the very first time — I knew he had it: Altman with MASH, Scorsese with Mean Streets, Paul Thomas Anderson with Hard Eight and, long before PTA, Forman with Taking Off. (With Demme, it took a smidgen longer because his style is kind of elusive, but it didn’t take me long to get with the program.)

For someone who lost his mother and stepfather to the Nazis and then had to live through Soviet oppression (and certainly Soviet hackery) in his formative years, Forman and most of his movies (including his three Czech features) had twinkles in their eyes. The latter trio also has the fresh, youthful spirit of rock-and-roll animals, though I’m talking about pets of gentle demeanor, not pitbulls. Having recently re-seen Loves of a Blonde on the old Criterion DVD and now its immediately preceding Black Peter on Second Run’s new multi-region release, I was struck at how both have long dance-hall sequences at social mixers during the Twist era. Assuming somebody even managed to slip him a print of either, one wonders what Khrushchev thought of such Western decadence coming out of Russian satellite cinema. Then again, maybe when he pounded his shoe at the U.N., it was secretly to a Chubby Checker beat.

Loves, which is much more sculpted, is still an absolute home run — an international hit at the time and still one of the best movies of 1965. The previous year’s Peter, which was done on a very low budget even for the Czech film industry at the time, is more of a shaggy-dog effort, though its observational instincts are spot-on, and Forman’s skill with actors (which would include the non-professionals who make up most of the cast) is still remarkable. His casting instincts were always sharp, even when they weren’t obvious (I, for sure, would not have thought of Tom Hulce for Amadeus). In this case, the looks and manner of Ladislav Jakim as lead Petr (the second “e” was for international audiences) are ideal for one so shy, bumbling and ground down by his parents (an overbearing dad and smothering mother). As a result, he’s pretty well bumbling the follow-through on his job as a grocery store spotter trainee who’s supposed to be keeping his eye out for petty shoplifters — yet just can’t bring himself to initiate altercations with even obviously guilty parties.

Not surprisingly, this shyness extends to amorous pursuits, making Petr oblivious to the possibility that the girl he likes (Pavla Martinkova) might reciprocate more than he thinks. But she’s pretty comely and also somewhere between low-key and impenetrable, so we wonder just how far two are going to get with more confident wolves on the prowl. One or two who look as if they might be such creatures begin talking trash as Petr and Pavla (her character name as well) are out for a boat ride. The brains of this outfit (which is a charitable assessment) is played by the film’s one professional actor who had a major role: Vladimir Pucholt, in a nuanced performance for one playing something of a dolt. But in an early example of how Forman’s movies often marched to their own tunes, he doesn’t turn out to be the threat that one would initially predict, and his sympathetic inclusion in the film’s final scene is a surprise.

Black Peter, which didn’t make it to U.S. cinemas until 1971, was previously available only on an import DVD said to be very rocky, but this print is from a 4K restoration done by National Film Archive, and it’s a nice job given the presumed limitations of the source material. In addition to a 20-page essay booklet (Jonathan Owen) and commentary by film historian Michael Brooke, the Blu-ray boasts an interview featurette with now 70-year-old Martinkova — shot at the same ice rink where the movie’s extended dance sequence was shot under extreme time pressures. Included as well is the germane section of a longer talking-head interview doc with Forman (Life As It Is) that concentrates on the in some ways lucky breaks he had early in his career. These got him rolling when some of his Czech filmmaking colleagues weren’t so fortunate internationally (though no one will ever be able to take Cutter’s Way away from Ivan Passer).

Nothing about this interview is elaborate, just as it wasn’t for Volker Schlonforff’s one-on-one doc with Billy Wilder or that unforgettably cantankerous interview with John Ford (very late in the game) that’s included on the Criterion release of Stagecoach. It’s just Forman behind his office desk spouting remembrances with great enthusiasm and colorful details that show a basic understanding of people. This is another of those cases — another is a talking-head portrait of Elia Kazan — where, without any knowledge of the work at hand, you can see instantly that this guy just had to be a great director by the way he could communicate and the rapport one senses he could establish.

I’m hoping to work my way through re-seeing all the Formans chronologically, and The Fireman’s Ball (for which I have very fond memories — and certainly fonder than those of Czech political authorities at the time) comes next. I thought I had the waterfront covered by owning all of the director’s features with most of them on Blu-ray — though Ragtime, for one, is still only on DVD (more ball-dropping by Paramount Home Entertainment). And I do, starting with Black Peter, which was Forman’s full-length debut.

But I now also see that Audition (also 1964 but earlier) is also available on a fairly pricey used DVD import — though by virtue of its 50-minute running time, one can’t call it a feature. I’ve never seen it but would love to because its subject matter — a talent competition involving enthusiastic but (affectionately) untalented participants — would seem to put it smack in Forman’s wheelhouse. In fact, it sounds a lot like one of the best scenes from Forman’s first U.S. release, Taking Off, a beguilingly non-judgmental comedy about teen runaways in Greenwich Village, plagued by a music rights problem that has limited its availability for years (though there’s a Region ‘B’ Blu-ray that carries controlling Universal’s logo).

By Forman’s own account, Off grossed about 14 cents at the time (I saw it at a drive-in with snow on the ground), and he didn’t work for four more years. Thus, one is compelled to assert that producer Michael Douglas has never done anything greater in his career than gambling on Forman to direct One Flew Over the Cuckoo’s Nest — though, in retrospect, it made perfect sense. The Czech government had been the filmmaker’s own Nurse Ratched — and they probably wouldn’t have allowed him to make Hair or biopics on Andy Kaufman and Larry Flynt.