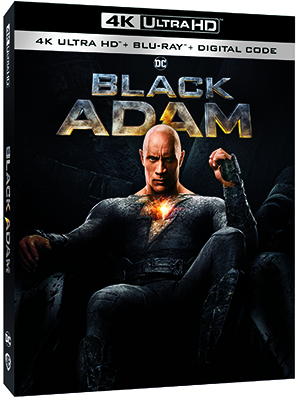 Turmoil surrounding the DC Comics film franchise put Black Adam in an unenviable position. On the one hand, it has the baggage of being connected to a cinematic universe many fans aren’t satisfied with. On the other, it was released just before creative changes at the studio fueled speculation that the whole franchise would be rebooted, which isn’t exactly an incentive for the remaining fans of the DC universe to rush out to see it.

The film was a passion project for star Dwayne Johnson, who said Black Adam was his favorite character growing up.

In the comics, Black Adam was the arch-enemy of Shazam — a malevolent force from ancient times whose powers derive from the same magic as Shazam. In more recent times he has been depicted as less of an all-out supervillain and more of an antihero. His existence is alluded to in the 2019 Shazam movie, though he doesn’t make a full-fledged appearance.

Black Adam’s own film thus depicts his origins as the champion of the fictional Middle East nation of Kahndaq, which in ancient times was ruled by a tyrant who enslaved his people to mine for a powerful ore. The Council of Wizards sought a hero of the people to imbue with their powers, but they were instead corrupted by Teth-Adam (Johnson), who used them to seek revenge against those who wronged him. As punishment, Adam was imprisoned by the wizards within the Rock of Eternity.

In the present day, 5,000 years later, Kahndaq is controlled by a criminal conglomerate known as Intergang, which similarly exploits the nation’s resources in search of the legendary Crown of Sabbac, which would give them untold power. A group of resistance fighters led by Adrianna Tomaz (Sarah Shahi) hopes to find the crown first to keep it from falling into the wrong hands, but in doing so end up freeing Adam from his tomb and unleashing him upon the modern world.

As a safeguard, Amanda Waller (Viola Davis) from some of the other DC films enlists members of the Justice Society to neutralize Adam. The team is led by Hawkman (Aldis Hodge), whose cinematic depiction is something of a combination of Marvel’s Falcon, Thor and Iron Man; Doctor Fate (Pierce Brosnan), who is basically DC’s version of Doctor Strange, but also has visions of people’s futures; Atom Smasher (Noah Centineo), the Ant-Man equivalent who can grow very large; and Cyclone (Quinessa Swindell), who can manipulate wind not unlike the X-Men’s Storm.

Adrianna and her son, Amon (Bodhi Sabongui), want to help Adam rid their country of Intergang, putting them in conflict with the Justice Society, who claim Adam’s power is too dangerous. Meanwhile, agents of Intergang plot to steal back the crown to unleash the powers of the ancient demons that can defeat Adam.

So, the set-up is a bit similar to 1999’s The Mummy, though Adam’s personality is much more complex. Seeing Adam acclimate to modern technology is amusing, especially as Amon tries to tutor him in how to be a superhero (complete with a coming up with a catch-phrase). On the other hand, Adam’s instinct to kill his enemies first and ask questions later cause quite a bit of friction with the Justice Society.

Stylistically, director Jaume Collet-Serra imbues the film’s confrontations with the sensibilities of a spaghetti western, a conscious choice he discusses in the bonus materials. The film also benefits from the undercurrents of a flashback structure that tells the parallel story of Adam in both ancient and modern times, representing thematically how the meaning and interpretation of historical artifacts can be misconstrued.

The film maintains its distance from the Shazam side of the DC franchise, aside from the fact that their powers derive from the same source (and Djimon Hounsou reprises his role as the wizard who guards over the magic). This also means several characters say the word “Shazam” to activate the powers, which makes it a bit weird that no one would mention that being the name of another superhero (particularly Amon, who has a sizeable collection of superhero merchandise, including a Shazam action figure). But it would probably be a bit less confusing if the hero known as Shazam were still allowed to go by his original moniker from the 1940s, Captain Marvel, before rights issues involving the ownership of different comic book companies made that name the purview of Marvel Comics.

Still, as its own standalone movie, Black Adam is a slick-looking adventure with a lot of delicious visual effects that stay true to their comic book influences. Most of the supporting characters arrive with exposition-heavy explanations of their powers, hinting at complex backstories that make them seem like they wandered in from other movies that were never made. And that ultimately is what Black Adam feels like — an addendum to the larger DC franchise cobbled together from components of other characters’ stories. It’s entertaining for what it is, making it disappointing to think there won’t be much follow-through on the story points it establishes.

The Blu-ray includes more than 70 minutes of behind-the-scenes materials, in the form of 10 separate featurettes covering everything from the history of the characters, to the development of the film, and the design of the costumes, sets and visual effects. In the 4K combo pack, the extras can be found only on the regular Blu-ray.