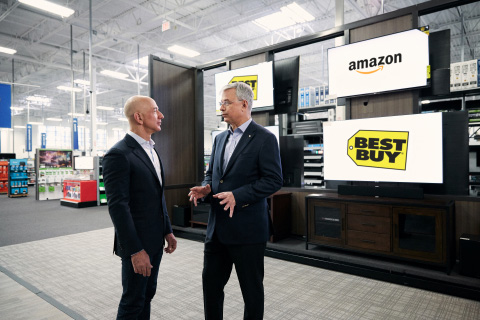 “Amazon and Best Buy have a long history of working together, and today we take our partnership to a new level,” Jeff Bezos, founder and CEO of Amazon, said in a statement. “We could not have a better partner in this endeavor.”

“Our goal is to enrich the lives of our customers by offering them the very best products and services, whether they come to us online, visit our stores, or invite us into their home,” said CEO Hubert Joly, alluding to the chain’s in-home Geek Squad tech support.

The newly designed smart TVs with Fire TV meld live over-the-air TV with streaming video into one location. Consumers can use Alexa to search for and watch broadcast content, or choose from a catalog of streaming video from Netflix, Amazon Prime Video, HBO Now, PlayStation Vue, and Hulu, among others. Fire TV Edition can also be paired with any Echo wireless speaker device.