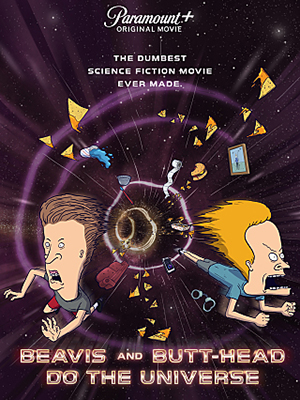 Beavis and Butt-Head conquer the final frontier in their latest hilarious adventure that finds them transplanted from the 1990s to the modern day just in time for their new TV show.

The second feature-length movie focused on the pair of dumbasses (following 1996’s Beavis and Butt-Head Do America) begins in 1998, with Beavis and Butt-Head (both voiced by series creator Mike Judge) accidentally burning down their high school science fair. To rid themselves of the duo, the school gives them what would have been the science fair prize, a trip to Space Camp.

Obsessed with the phallic nature of rockets, the pair prove to be adept at docking maneuvers, and are recruited for an actual space shuttle mission, which they only agree to go on because they think the mission commander, Serena Ryan (Andrea Savage) wants to have sex with them.

Once in orbit, they of course screw everything up, and find themselves ejected into deep space, where they encounter a black hole that sends them to 2022.

As they marvel at the changes in society the past few decades, such as smartphones, they are visited by alternate versions of themselves who tell them they must return to their own time or risk destroying the multiverse. Their smarter versions set up a portal for the dumb ones to go through, but getting to the portal isn’t exactly a smooth trip.

Beavis and Butt-Head end up in prison while being pursued by federal agents who think they’re aliens, and the modern-day Serena Ryan, who is now governor of Texas and thinks the reemergence of the boys while reveal she tried to kill them on the mission and thus end her re-election bid.

Beavis and Butt-Head particularly clash with modern politics, when they misunderstand a snooty college professor telling them they have white privilege, leading them to believe they can do whatever they want without consequences, and deciding to test that theory in one of the film’s funniest sequences.

Ultimately, however, the film isn’t pushing any annoying messages. It’s doing what Beavis and Butt-Head always do, serving up some dumb laughs and a lot of fun.