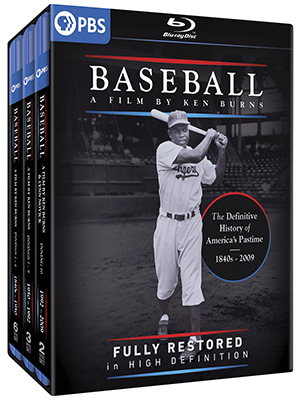 Documentarian Ken Burns’ Baseball is a must-see for any fan of America’s national pastime. Burns’ definitive recounting of the game, presented in nine parts (structured like the innings of a ballgame) running a total of about 19 hours, guides viewers through baseball’s origins in the 19th century, to the formation of the Major Leagues, the important games, the rise of the great players, and even the history of the Negro Leagues.

Through archive footage and interviews with those who influenced the game and were influenced by it, Burns presents the national pastime as a metaphor for America, growing and changing with the times.

Baseball was originally released by PBS in 1994, serving to fill a gap in fans’ yearning for the game when the season was cut short by a players’ strike. As it was originally presented in the 4:3 ratio standard for TV at the time, subsequent home entertainment releases (VHS and a few editions on DVD) have made it available only in standard-definition, until now.

Burns’ 10th inning update in 2010, covering what had transpired in the big leagues since the end of the original documentary, was produced in high-definition, offering a clear contrast in image quality compared with its lower-resolution predecessor. In 2013, Burns remastered his classic The Civil War documentary, but it took another eight years for Baseball to get a similar upgrade.

The original nine episodes have been gloriously remastered in high-definition for the long-awaited Blu-ray release, presented as an 11-disc boxed set of both the original series and The 10th inning.

This is not just a wonderful sports program, rich in memory and detail, but also one of the all-time great documentaries, ranking up there with The Civil War, if not better, at least in terms of entertainment value if not pinpoint accuracy.

In drifting between its narrative setups and the reflections of its interview subjects, the original run of Baseball tends to indulge itself in the folklore of the game, printing the legend, so to speak, while only occasionally taking the time to set the record straight.

It also leaves out some key details, such as realignments and labor stoppages. Each decade gets two hours except for everything before 1900, and after 1970. The 1970s, 1980s and the 19th century get essentially an hour each.

Baseball is the story of the game through its biggest stars, most eccentric personalities, key moments and cultural impacts. In addition to the classic touchstones of the history of the Major Leagues, Baseball famously tracks the history of minorities in baseball, particularly the formation of the Negro Leagues to the integration of the Majors starting with the Dodgers’ Jackie Robinson in 1947. This actually serves to make it an interesting companion piece with The Civil War, if not something of a sequel.

For hardcore fans of the game, the documentary’s vivid retelling of baseball’s history and the nostalgia that embodies makes it something akin to comfort food.

There’s just a timeless quality to it that makes Baseball still vibrant despite its age. However, it’s amusing how the narration will make absolute statements about things that had yet to happen when it first aired that have since happened, such as new World Series wins for the Red Sox, Yankees, Giants and Cubs, and various records that have been broken, such as the single-season and all-time home run marks.

Just from watching the episodes and comparing them with the old standard-def version it’s pretty clear they remastered all the individual elements from the series — interviews, archive footage and photos — and reconstituted the episodes in a widescreen aspect ratio. So, yes, that means recropping a lot of footage, so tops and bottoms of scenes originally presented as square are now gone so it fits the shape of the HD rectangle. This is a minor quibble since the cleaned-up footage looks so good.

The exception, however, comes when the old footage comes from television broadcasts or videotape, which starts to creep in at around the 1960s. Since this footage can’t really be remastered as much as upscaled, it shows off a lot of digital artifacts, and a lot of it looks better on the old standard-def DVDs.

Unlike the Civil War Blu-ray there’s no featurette about the remastering process, but one has to assume it was handled in a similar way to that groundbreaking documentary. PBS earlier presented the remastered version online. Interestingly, the typical PBS pre-show acknowledgements of sponsors still uses the voiceover as if this were being viewed on a PBS station and not on disc.

The only extras in the Blu-ray set are those that carried over from the original home video release of The 10th Inning, which had already been released as a standalone Blu-ray when it first came out. Those extras include interviews with Burns and his collaborator, Lynn Novick, about revisiting Baseball, as well as extra footage shot during production of The 10th Inning but not used in the show.

The original miniseries had some DVD making-of featurettes back when it was released by Warner in 2000, but those never made it to the PBS DVD re-releases in 2010 and they aren’t here either.

It should be noted that the version of The 10th Inning in the new boxed set aren’t the same discs as the update’s original Blu-ray release. While all the content is the same, the discs have been re-engineered with a new menu, which matches the menu from the Blu-rays of the original series episodes, further giving the whole show more of a unified feel.

While it does a nice job of recapping baseball from the 1990s and early 2000s, The 10th Inning just feels a bit different in tone from the original miniseries because it’s so contemporary. And it’s not just the fact that John Chancellor, the original narrator, died in 1996. They could have replaced him with Civil War narrator David McCullough, who sounds close enough and shares a similar cadence. Instead they went with Keith David, whose own distinct voice makes him a great choice, but it lacks the certain folksiness that Chancellor had that brought so much charm to those first nine innings.

Instead, It feels more like an examination of the foibles of the modern game than exploring it as a reflection of America’s self-image. Most of its focus seems aimed at the resurgence of the Yankees and Red Sox, plus issues related to the strike of 1994, and a lot of time devoted to steroid scandals, framed by the career of Barry Bonds.

In many cases the recaps seem less about reflecting on the cultural significance of the moments and more about providing epilogues for the personal fandoms of many of the filmmakers and interview subjects (most of which, unsurprisingly, are big Yankees and Red Sox fans).

As such, The 10th inning, even 10 years on, doesn’t feel much different than any number of typical ESPN documentaries covering the same topics.

It’s long at four hours to cover the 1990s and 2000s, but leaves a lot of stuff out. And the choice to frame baseball’s recent history through certain narrative threads also causes some odd structural issues that didn’t affect the original series because it’s easier to gloss over certain things that happened when many of the viewers weren’t alive. But most viewers of The 10th Inning have their own memories and opinions about the events depicted, and will have widely varied expectations about what should be covered.

As an example, Angels fans curious about how the show covers the 2002 World Series, the first and only title in the franchise’s history, will likely be disappointed that the 2002 World Series is presented almost exclusively from the point of view of how Bonds was denied a championship; it can barely be bothered to mention any of the Angels players or coaches.

In another segment, despite extensive coverage of the 2001 World Series following 9/11, no mention is made of George W. Bush throwing a perfect strike for the ceremonial first pitch before game three, and how much that contributed to boning up the national psyche following the attacks. The omission, while conspicuous, is perhaps not much of a surprise given Burns’ political proclivities.

But these are ultimately minor quibbles, and obviously, with all that’s happened in the past decade in baseball, from sign-stealing scandals to the COVID season, an 11th inning update from Burns would definitely be welcome.