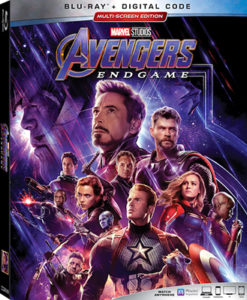 The 22nd film in the Marvel Cinematic Universe concludes the first “Avengers” saga that has spanned 11 years, beginning with 2008’s Iron Man. The film, in which the Avengers take one final stand against Thanos, has earned $834.9 at the domestic box office. Its $2.75 billion worldwide box office tally is the highest-ever for a film in its initial theatrical run (without a re-release).

Bonus features include a tribute to Stan Lee; the tale of Robert Downey Jr.’s casting as Iron Man; the evolution of Captain America; Black Widow’s dramatic story arc; directors Anthony and Joe Russo’s experience at the helm of both Avengers: Infinity War and Avengers: Endgame; the making of an epic battle scene with the women of the MCU; the creation of Bro Thor; deleted scenes; a gag reel and more.

Consumers can also buy a digital bundle of all four films in the Avengers franchise, which includes Marvel’s The Avengers, Avengers: Age of Ultron, Avengers: Infinity War and Avengers: Endgame.

The film’s theatrical run is expanding June 28 with an introduction by the Russo Brothers and additional post-credits footage.