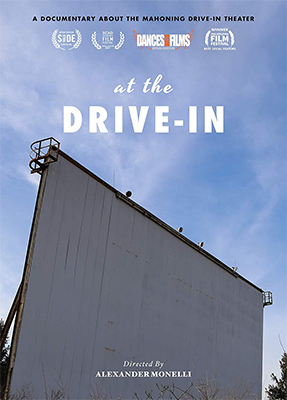 Filmmaker Alexander Monelli’s At the Drive-In is such an affectionate doc about one community’s approach to cinemania that it has potential to become a fan favorite, though I suspect it already is one to those who’ve seen it. This would only be fitting because this real-life story is to a great degree about fans, starting with Jeff Mattox, the good-guy owner and projectionist of the Mahooning Drive-In in Leighton, Pa. (about 40 miles from both Allentown and Wilkes-Barre and not all that far from the area where Barbara Loden shot Wanda, now out on a Criterion Blu-ray).

In addition, we get a basic primer on the legacy of drive-ins and what that experience was all about in their heyday — and another on the aesthetic tension between theaters’ now-standard digital projection and the traditional 35mm kind with real film (and not on a potentially print-damaging platter system but with a real human being who changes and inspects reels). The latter approach, of course, is nearly a lost art due to the advancing age of the individuals who know to thread up those old machines (the fully operational Mahooning ones date back to 1949). When I was working at a theater in 2014 that was showing an actual print of Christopher Nolan’s Interstellar in one auditorium, it took about three days for an in all other ways on-the-ball projectionist to put something between a scratch and a divot for the entire length of one reel, making the image look like something on which Donald Trump had been practicing so that he could better mangle his chip shots. Even so, digital is not going away. Shipping costs on 35mm prints just by themselves might be enough to put a theater with multiple screens on panic alert. I used to lift and carry these babies around for years (Baby Huey is more like it), and I’m tellin’ ya: Hernia City.

With the dwindling numbers of both projectors and projectionists, non-existent prints inevitably follow, and Monelli’s 2017 doc follows the theater’s fortunes when faced with having to buy digital projectors it can’t afford. At this point, an array of youthful saviors (“characters” all) arrive to save the day with weekend volunteer work to improve the theater’s cosmetics — and additionally go to town with a newly arrived-at decision to become something really offbeat: a drive-in rep house. This way, prints might still exist for booking, however old and scratchy. And besides, the operation’s two standout selling points are its monster screen (among the biggest still in existence) and a keen sense of how to exploit the nostalgia conjured up by the drive-in experience in general, which older movies obviously stoke.

Of course, my own sense of older-guy nostalgia differs from that of the audiences here because I come from a time when memories and movies were more grown-up and there were zoning laws against geek-dom. Despite the tinny speakers, which represented slightly less of a comedown then from indoor exhibition than they would now, I have exceedingly warm takeaways from my drive-in years. In my town (one state away from the Mahooning), a lot of movies — the first two James Bond pics, all the Leone Westerns including Once Upon a Time in the West, John Huston’s Sinful Davy, Roman Polanski’s The Fearless Vampire Killers, Billy Wilder’s Kiss Me, Stupid — played outdoors exclusively.

In terms of second runs or re-issues, you not only got great double features (I once saw Wilder’s Witness for the Prosecution with Vincente Minnelli’s Designing Woman at a drive-in when they were recent movies) or gonzo combos that you weren’t likely to find outside of Times Square Midnight Cowboy territory. With snow on the ground, I saw Anthony Mann’s The Fall of the Roman Empire with a Martin & Lewis reissue pairing of Pardners and Living It Up. In 1971, I was still able to see 1958’s Thunder Road at the end of a triple bill of Ivan Passer’s Born to Kill and Michael Winner’s Lawman — this time with snow coming down on my windshield (those in-car heaters really did work). Before I could drive, I walked three miles each way to a drive-in and sat next to a speaker in a lighter-than-intended jacket to watch a pairing of the Jerry Lewis/Frank Tashlin It’s Only Money with my fifth viewing of the 159-minute Hatari! (which would make a great Criterion pick) as the temperature hovered around 35 with the long walk home still facing me.

In the documentary’s case, both patrons and staff are products of ’70s and ’80s moviegoing, so they are much more likely to serve and be served a Mahooning diet of Spielberg and horror, which isn’t to say that the theater isn’t creatively programmed. We see that thematic weekends (think comprehensive directors’ retrospectives) often dominate, and the season opener is always The Wizard of Oz with Willy Wonka and the Chocolate Factory — the latter a movie I didn’t even like in 1971, though as a onetime film programmer myself, I admire the savviness of the pairing. The Mahooning’s choice of movies also lends itself to having customers and staff dress up Rocky Horror style as the characters being projected, which again differs from my own experience. Had I shown up at a drive-in in 1962 dressed as Jerry Lewis, the entire upscale community would have buried me alive in a lime pit at the quarry that wasn’t too far from the theater: Movie Mike turned Jimmy Hoffa.

The particulars of exhibition explained here are catnip for those of us true believers who love to journey inside baseball, but a lot of this portrait’s charm comes from the camaraderie conveyed. The staff members, Mattox included, have real paying jobs during the week — which is good to hear because one of them has a pregnant wife who presumably isn’t too crazy about her husband working weekends for free at the drive-in. Truth is, everyone is working gratis trying to save the theater, and a few staffers even sleep on the floor at night because it eliminates travel time.

Aside from Mattox, who’s kind of a stabilizing father figure, everyone who labors at the theater is a piece of work who could easily inspire a fictional film from the Kevin Smith school; Smith, in fact, is regarded as some kind of bearded deity by this  particular crew. And as crucial good fortune has it, there’s even a staff techno-genius in residence who masterfully jerry-builds a digital projector to show a DVD of Jaws when Universal can’t deliver a print on time (boy, does this bring up a slew of malaria-chills memories from my own programming days). Miraculously, it works, though I kept wondering if this emergency set-up would be able to generate enough light to show Barry Lyndon during some Kubrick weekend. Then again, I suspect that Barry would be less than ideal programming choice for the demographic at hand.

This is because the theater “regulars” are no less idiosyncratic as the staff, including the inevitable movie expert who regularly drives hundreds of miles to see the shows. He is so articulate with at least a streak of open-mindedness that you can’t call him pompous, but he could probably give you a five-minute monologue on the brand of canola oil used to make the concession popcorn. Understand that I say all this with considerable affection, but this kind of all-out devotion to movies just isn’t in my own DNA, though it fascinates me. Speaking as a onetime programmer, this one would make a fabulous pairing with 2002’s Cinemania (buff-tom nine mad in Manhattan), which remains the final word on the subject.

For added goodies, there are three voiceover commentaries, 17 minutes of outtakes (mostly of short duration) and a Q&A session with principals from a showing of this doc at a Yonkers Alamo Draft House. I’ve always liked exhibitors as a breed, and one in particular (if you don’t count my paternal grandmother) was my biggest mentor of my life when I was first trying to learn what movies were all about. Mattox is instantly recognizable as this brand of prince, which conjures up all kinds of warm feelings on my part — though honest to God, and even from the get-go, I couldn’t see how anyone could have the painstaking patience to string up a fresh reel of film every 20 minutes or so while at least half-watching A Girl Named Tamiko or Dirty Dingus Magee for the 10th time. Bring on the combat pay.

Mike’s Picks: ‘At the Drive-In’ and ‘The Whole Town’s Talking’