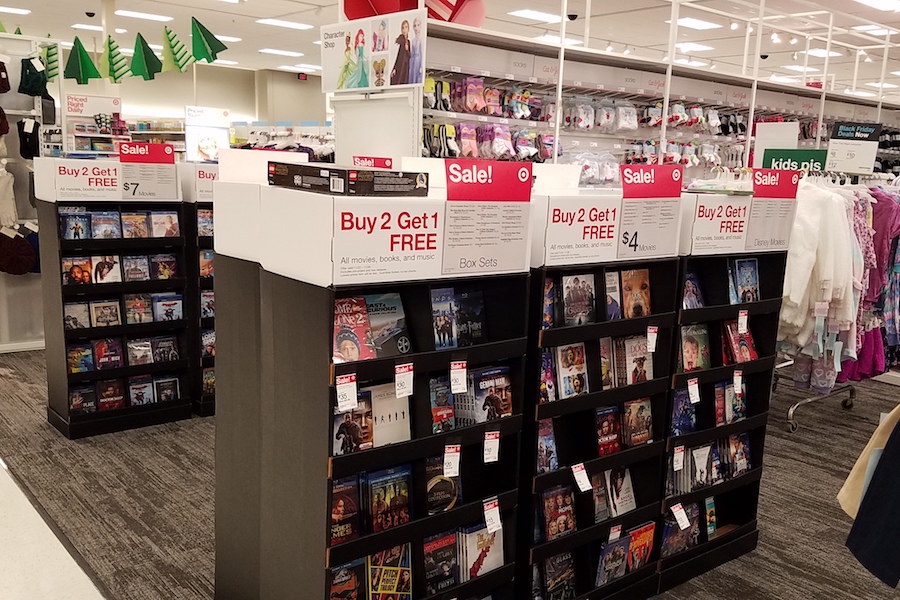 A "Buy 2 Get 1 Free" on movies, books and music display at a Mission Viejo, Calif., similar to displays at most of the chain's stores.

The COVID-19 pandemic has changed this year’s Black Friday retail shopping frenzy, in which hordes of shoppers typically camp out overnight waiting for stores to open early on the morning after Thanksgiving — or, in recent years, start shopping right after they finish their turkey dinners.

With COVID-19 surging in what health experts are calling a third wave of the disease, none of the big retailers opened their doors on Thanksgiving Day — not even Walmart, which used to be open all day, or Target and Best Buy, which opened for business in the late afternoon or at midnight.

The big retailers also began offering their deep discounts several weeks before Black Friday, often targeting online shoppers with Web-only specials. And the year’s hottest gift item, Sony’s new PlayStation 5 video game console, saw gamers glued to the Internet to watch for alerts on Twitter and other social media channels about the next wave of consoles available at the various retailers, mostly for online purchase.

“One thing that is happening, and has been happening for awhile, is the past couple of years, we’ve seen Black Friday deals moving more and more online,” Amir Neto, director of Lutgert College of Business at Florida Gulf Coast University, told USA Today. “This year, there are more incentives to maintain or expand this trend.” 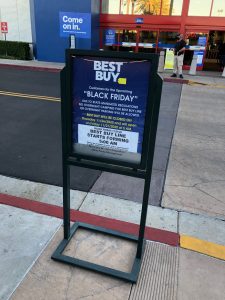 Adobe Analytics on Nov. 27 reported that online spending on Thanksgiving Day rose by nearly 22% to reach a new record of $5.1 billion, from $4.1 billion last year. The research firm said November and December online sales are expected to jump 33% this year, totaling $189 billion, including $10.3 billion on Black Friday.

Aside from the big retail players, Family Video, the last remaining national chain of dedicated video stores, sent out an email early Friday morning offering discounts of up to 75% on Warner Bros. DVDs, Blu-ray Discs and 4K Ultra HD titles, including Aquaman, The Dark Knight, Inception, Doctor Sleep, 12 Strong and Annabelle. “You will not find better Black Friday deals on Blu-rays, DVDs, and 4K Blu-rays from Warner Bros. anywhere else!” the Family Video email read, noting that the sale ends Nov. 30.

Meanwhile, with physical stores having offered discounts all week, reports on Black Friday itself suggest the early rush to physical retail stores is more of a trickle this year. A Target store in Costa Mesa, Calif., was practically empty shortly after 7 a.m. on Nov. 27. “It looks like any other day,” said one observer.

Target is running a buy-two-get-one-free promotion on books, movies and music. Blu-rays and DVDs could be had for as low as $4, $7 and $9. Signs were placed not only in the electronics area, but in some stores displays were put in the clothing section in the center of the store and at checkout. One customer in Mission Viejo, Calif., noted that the sales weren’t as prevalent as previous years.

At a Costa Mesa Best Buy, there were fewer than two dozen people waiting in a socially distant line, a far cry from prior years.

In Oceanside, Calif., a Walmart was a little busier, but the traditional DVD and Blu-ray Disc “dump bins,” featuring catalog movie titles priced as low as $2 to $5, were conspicuously absent. “It’s really slow,” a clerk said.

Chicago resident Maria Lopez, who often shops on Black Friday, said she was only visiting one store this year out of concerns of contracting the coronavirus. Lopez bought a 42-inch television from Best Buy.
“It’s so sad,” Lopez told the Chicago Tribune. “I’ve been out since 6 a.m. and there were no long lines. It’s definitely not the same like years prior.”

And yet the National Retail Federation earlier in the week  forecast that total holiday sales during November and December would be up by as much as 5.2% from the same period last year, generating $755.3 billion to $766.7 billion in revenue. The data, which excludes automobile dealers, gasoline stations and restaurants, compares with a 4% increase in 2019, and an average holiday sales gain of 3.5% over the past five years.

Redbox is participating in the Black Friday discounting frenzy with specials across all its platforms, physical as well as online. Through the weekend, the retailer is offering customers who rent two discs at its more than 40,000 kiosks 50 cents off, as well as “price drops” on digital rentals through Redbox On Demand. Redbox also is hosting a used movie sale at “select kiosks,” selling off previously viewed copies of films such as Trolls World Tour ($3.99), The Tax Collector ($5.99) and Justice League ($3.99). 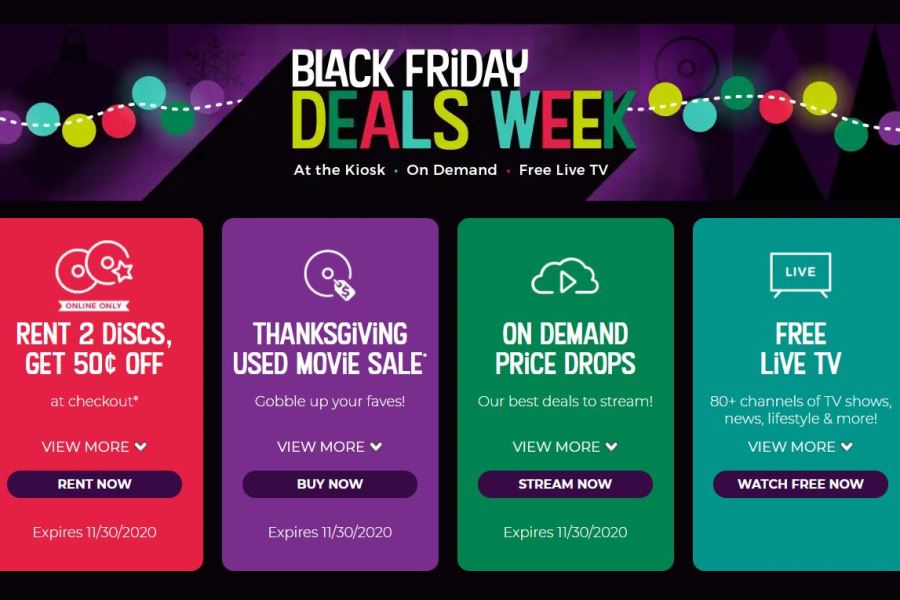 On the streaming front, NBCUniversal as a Black Friday special offered 20% off access to the Peacock subscription streaming service, while Hulu launched a discounted $1.99 monthly promotion at midnight on Thanksgiving Day. The campaign gives new and returning subscribers 12-month access to the ad-supported Hulu option, which amounts to a $48 savings over the recently reduced $5.99 monthly fee (from $7.99). The ad-free subscription plan remains priced at $11.99 monthly.