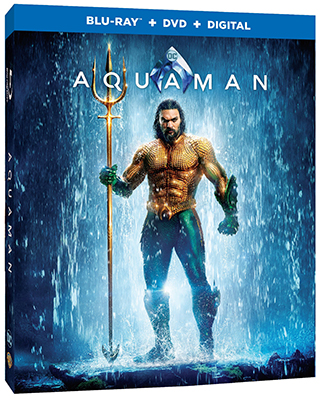 It’s a bit amazing to think that the Justice League member so often derided as “the one who talks to fish and is useless on land” is now the subject of the highest-grossing movie based on a DC Comics character at the worldwide box office.

Already a regular target of parody shows such as “Robot Chicken,” the Aquaman character was famously used as the centerpiece of a storyline on HBO’s “Entourage” involving a blockbuster movie version directed by James Cameron — poking fun at both Cameron’s penchant for water movies and the idea that anyone would ever make an Aquaman movie.

Well, the real film, directed by James Wan, certainly dispels any notion that Aquaman isn’t suited for the big screen. Coincidentally, with this film and Furious 7, Wan became the only director other than Cameron (with Avatar and Titanic) to guide two films from separate franchises into the global box office’s billion-dollar club.

Jason Momoa takes on the title role, his third film appearing as the character, after a cameo in Batman v Superman: Dawn of Justice and an expanded presence in Justice League. His larger-than-life persona and carefree attitude serve the film well by helping the audience accept the bizarreness of the worlds being created without the need to take it too seriously.

Arthur Curry (Momoa) is the product of the unexpected love of a lighthouse keeper (Temuera Morrison) and the Queen of Atlantis (Nicole Kidman) who ends up at his shore when she escapes an arranged marriage. Arthur’s unique heritage gives him superhuman abilities, such as strength, invulnerability, the ability to swim fast and a telepathic bond with sea creatures.

With his reputation as a hero established in Justice League, Arthur is sought out by the princess Mera (Amber Heard) to claim the throne of Atlantis from his half-brother (Patrick Wilson), who wants to destroy the surface world.

To do that, he and Mera must embark on a quest to locate a mythical weapon that will allow him to assert his claim as the rightful king of Atlantis.

The story will draw a lot of comparisons with Black Panther in that both deal with heroes introduced in earlier films, with their own films focused on tying their origins into storylines involving taking control of their hidden kingdoms away from maniacal family members who want to conquer the outside world. Tonally, the film is more like Thor: Ragnarok, which also deals with a battle for the throne of a powerful kingdom. These recent superhero movies have certainly embraced that Shakespearean power dynamics motif lately (which may just speak to how most comic books can be reduced to a few fundamental tropes before all the personality and detail that makes them popular are added).

Between the “Game of Thrones”-esque political intrigue and “Indiana Jones”-style adventure subplot, much of the film’s success owes to its sense of fun and its willingness to depict absolutely anything on screen despite how absurd it is while treating it as epic. Wan fills almost every frame with fantastic imagery awash in vibrant color that really shines through in its high-definition Blu-ray presentation. Many of the scenes look as if Wan pulled them directly from a comic book, and even makes Aquaman’s traditional orange and green costume look cool, which should no doubt please fans of the character.

The Blu-ray includes more than an hour-and-a-half of featurettes detailing all the aspects of the production, from Momoa’s casting, to the stunt work, to the development of the depictions of the undersea kingdoms that comprise the Atlantean realms.

One of the more interesting videos in this regard is the “Kingdoms of the Seven Seas,” a profile of underwater politics hosted by Dolph Lundgren, who plays the ruler of one of them. Between this and his recent turn in a “Rocky” retrospective on the Creed II Blu-ray, Lundgren has been pretty busy on the Warner lot hosting bonus videos.

Another interesting tidbit comes during an analysis of the film’s memorable sequence involving the devolved creatures of the Trench, which plays to Wan’s horror roots. At one point, an excited Wan suggests the Trench should be the basis of its own movie. Unsurprisingly, a Trench spinoff has already been announced.

Finally, the disc includes a three-minute scene from the upcoming Shazam! movie.