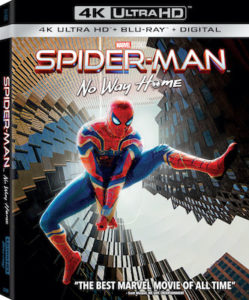 The Marvel Studios film Spider-Man: No Way Home arrives on DVD, Blu-ray Disc and 4K Ultra HD Blu-ray Disc April 12 from Sony Pictures Home Entertainment. As the film begins, the friendly neighborhood hero’s identity is revealed, bringing his superhero responsibilities into conflict with his normal life and putting those he cares about most at risk, including MJ (Zendaya). When he enlists Doctor Strange’s (Benedict Cumberbatch) help to restore his secret, the spell tears a hole in the world, releasing the most powerful villains who’ve ever fought a Spider-Man in any universe. Peter (Tom Holland) will have to overcome his greatest challenge yet, which will not only forever alter his own future but the future of the Multiverse. The film was the top-grossing film of 2021 with more than $800 million at the domestic box office and more than $1.8 billion worldwide. Read a review here. 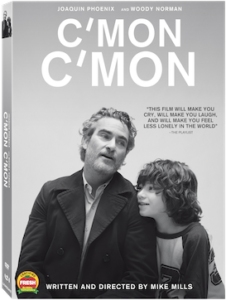 A24’s drama C’mon C’mon, starring Joaquin Phoenix, arrives April 12 on DVD and Blu-ray from Lionsgate. In the film, Johnny (Phoenix) and his young nephew (Woody Norman) forge a tenuous but transformational relationship when they are unexpectedly thrown together in this story about the connections between adults and children and the past and the future. Written and directed by Academy Award nominee Mike Mills (2016, Writing — Original Screenplay, 20th Century Women), the movie also stars Primetime Emmy Award nominee Gabby Hoffmann (2015 and 2016, Outstanding Supporting Actress in a Comedy Series, TV’s “Transparent”), Scoot McNairy (Argo, Monsters, TV’s “Narcos: Mexico”) and Jaboukie Young-White (TV’s “The Daily Show,” “Awkwafina Is Nora from Queens”). 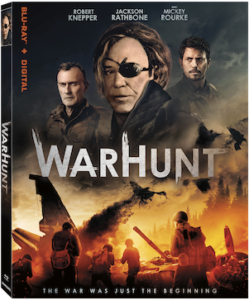 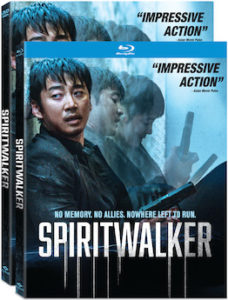 The HBO Max Original Kimi arrives on DVD and for digital sellthrough from Warner Bros. Home Entertainment. Due April 12 is Kimi follows Angela Childs (Zoë Kravitz), who reviews data streams for the voice-activated companion server KIMI. Amid a pandemic, though restrictions have eased, she suffers from agoraphobia and follows a strict routine, flirting — among other things — with her neighbor, and communicating with her mother, dentist and therapist via video chat, within the safety of her apartment in Seattle. But that changes when she hears something horrific in one of the streams and reporting a serious crime over email is deemed too risky. Angela hasn’t ventured outside since before the pandemic, so just getting to the office is a huge challenge. Determined to do the right thing, Angela has no idea what will actually happen when — and if — she’s able to step out of her comfort zone. Special features on DVD include “KIMI … Who’s Listening!!?,” which delves into the thriller nature of the film.

The animated adventure My Sweet Monster will be released on digital, on demand and DVD April 12 from Lionsgate. The film features the voice talents of Pauly Shore (Bio-Dome, Encino Man), Haylie Duff (Blending Christmas, Napoleon Dynamite) and Jon Heder (Blades of Glory, Napoleon Dynamite). In the animated adventure, after rebellious Princess Barbara flees the kingdom on the day sheʼs set to marry Bundy, an evil postman, she meets Bogey, an odd, semi-human beast who is king of the wilderness. When Bundy then plots to rob the forestʼs supply of a magical, life-giving elixir called Spark, itʼs up to Bogey, Barbara and their bouncy friend Bunny to stop him.

The sci-fi actioner Infinite arrives for digital purchase April 12 from Paramount Home Entertainment. Starring Mark Wahlberg and Chiwetel Ejiofor and directed by Antoine Fuqua, the film is based on the book The Reincarnationist Papers by D. Eric Maikranz. The film follows characters who must use memories and skills from past lives to protect the future of humanity in a race against time in the fight between good and evil. Wahlberg plays Evan McCauley, who is haunted by skills he has never learned and memories of places he has never visited. As he is self-medicated and on the brink of a mental breakdown, a secret group that call themselves “Infinites” comes to his rescue, revealing to him that his memories are real — but they are from multiple past lives. The Infinites bring Evan into their extraordinary world, where a gifted few are given the ability to be reborn with their memories and knowledge accumulated over centuries. With critical secrets buried in his past, Evan must work with the Infinites to unlock the answers in his memories in a race against time to save humanity from one of their own (Ejiofor) who seeks to destroy it. The film also stars Sophie Cookson, Jason Mantzoukas, Rupert Friend, Liz Carr, Toby Jones and Dylan O’Brien. It arrives on 4K Ultra HD, Blu-ray and DVD May 17.

Kino Lorber April 12 releases the vintage slasher film New Year’s Evil on Blu-ray Disc. The film, issued under the indie film distributor’s Studio Classics line, was released theatrically in 1980 by Cannon Films. The film stars Roz Kelly as Diane “Blaze” Sullivan, a Los Angeles punk rock and new wave show host who gets a barrage of phone calls during a televised New Year’s Eve celebration from a killer warning her that he plans to commit a string of murders just as the New Year dawns in each time zone. Kelly is best known as Arthur “Fonzie” Fonzarelli’s (Henry Winkler) girlfriend Carol “Pinky” Tuscadero in the 1970s TV series “Happy Days.” New Year’s Evil was written and directed by Emmett Alston and co-written by Leonard Neubauer. Kip Niven and Chris Wallace co-star.  The film was initially released on Blu-ray Disc in 2015 by Shout! Factory. Kino Lorber’s new edition features a 2K master and a host of extras, including audio commentary by Alston and a making-of documentary. 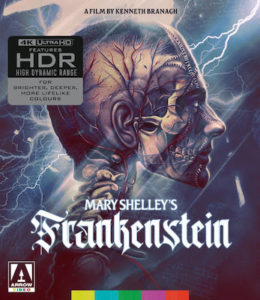 Mary Shelley’s Frankenstein is available on 4K Ultra HD April 12 from Arrow Video. Kenneth Branagh directs and stars alongside an all-star cast that includes Robert De Niro, Helena Bonham Carter and Ian Holm in this cinematic telling of the influential gothic tale. At the turn of the 19th century, scientist Victor Frankenstein (Branagh) is determined to conquer human morality. His attempt at playing God results in the creation of a hideous monster (De Niro). The film earned an Oscar nod for Best Makeup and seven nominations at the Saturn Awards. Arrow brings the film to 4K for the first time with a brand new restoration from the original camera negatives. The release includes a slate of new special features, including a documentary on the origins and evolution of the Frankenstein story. 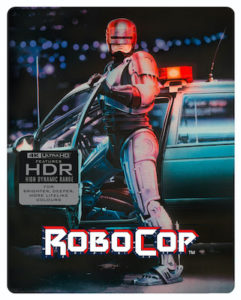 April 12 also marks Arrow’s release of Robocop in a limited edition 4K Ultra HD Steelbook. This sci-fi classic, about a terminally injured cop (Peter Weller) that returns to the line of duty as a cyborg advertised as the future of law enforcement, introduced Hollywood to the wild world of director Paul Verhoeven. The film is making its global debut in 4K, with a restoration approved by Verhoeven. Included in this limited edition release are both the theatrical and director’s cuts of the film.

The documentary The Choir and Conductor will be released for digital purchase and VOD April 12 from Virgil Films. Musician Billie Eilish, who has a brief appearance in the film as an alumna of the Los Angeles Children’s Chorus, learned to sing starting at age 8 when she, like thousands of choristers, was electrified by its charismatic conductor Anne Tomlinson, who uses the power of choral singing to profoundly shape and impact the lives of hundreds of children.  In addition to Eilish, composers  such as John Williams, Gustavo Dudamel, John Mayer, Peter Sellars, and others have performed with the choir known as the LACC.  The film, which chronicles the story of the LACC, is a celebration of music and the arts. According to a report issued by Chorus America “more than 1 in 5 households have at least one singing family member, making choral singing the most popular form of participation in the performing arts for both adults and children.”