After nearly doubling its U.S. user base last year, growth for TikTok, a Chinese video-sharing social networking service, will slow in the coming years as competition heats up and concerns grow among marketers, according to new data from eMarketer. 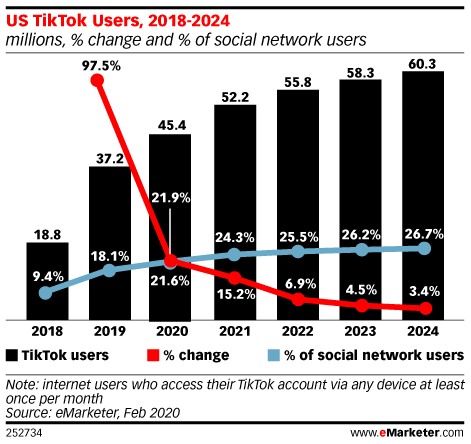 “TikTok had a breakout year in 2019, and it is incredibly popular among teens at this point,” analyst Debra Aho Williamson said in a statement. “Some are spending multiple hours per day on the app, which is a testament to the incredible stickiness of its scrolling video format. But it has yet to develop a strong following among older generations.”

This year, 21.6% of U.S. social network users, or more than one in five, will use TikTok at least once a month. Despite having lower penetration than more established competitors, it’s one of the few social apps whose penetration is growing.