Subscription video-on-demand services are all the rage. So much so that the average household in the United States and Europe has three or more services, according to new data from Ampere Analysis. In the U.S. the proportion of survey respondents with three or more SVoD subscriptions has grown 6.6% since Q3 2018; up 6.3% in Europe.

About 40% of respondents in the U.S. have three or more SVOD subscriptions, compared with 20% in Europe.

London-based Ampere conducted the survey of 16,000 to 33,000 Internet respondents from seven international markets in the third quarter 2019.

In most countries, SVOD and pay-TV is the most common service combination among Internet users, as consumers seek to supplement their cable or satellite TV services with online video. The proportions vary considerably though, ranging from 56% of respondents who mix pay-TV and SVOD in Holland, South Africa and the U.S. to just 13% in Japan, where free TV and SVOD combinations are more common.

Australia, Italy and Japan are unique for having the fewest households mixing pay-TV and SVOD. As free TV services are widespread in these markets, it is unsurprising that SVOD-only is the most common paid service among consumers, who use it in combination with a strong free-to-air TV offer. 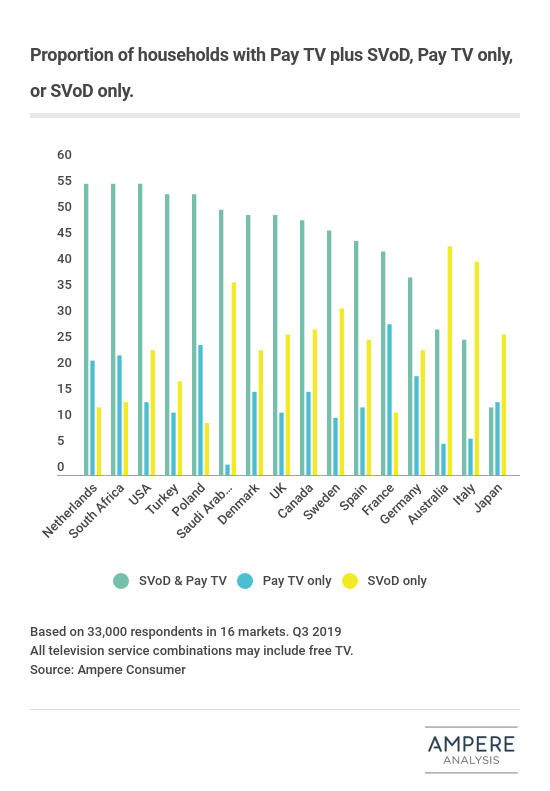 “While cord-cutting is a major issue in the U.S., it has been a less significant challenge for the industry in many international markets,” Minal Modha, consumer research lead at Ampere, said in a statement. “However, our research shows that consumers in many global markets are increasingly combining SVOD products with a free broadcast TV service, placing future a growth obstacle in the path of incumbent pay-TV service providers.”