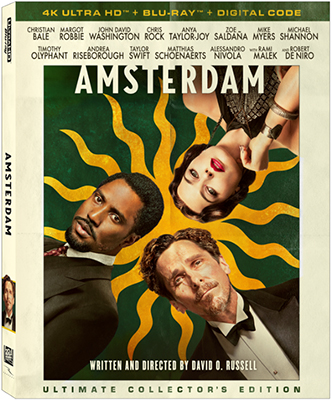 Director David O. Russell’s Amsterdam may have been slammed by critics and flopped at the box office, but can any movie that features Taylor Swift being run over by a car really be all that bad?

Amsterdam tells the story of three friends from World War I who reconnect in 1933 when they are embroiled in a murder mystery. Christian Bale plays Dr. Burt Berendsen, who spends his time crafting cosmetic prosthetics for war veterans and experimenting with developing more-potent painkillers. He’s contacted by a war buddy named Harold (John David Washington) who now serves as a lawyer, regarding the death of their former commanding officer.

Swift plays the general’s daughter, who suspects foul play and enlists Berendsen to conduct an autopsy despite the authorities ruling he died from natural causes. After being warned to drop the inquiry, she’s pushed into the street by a hitman (Timothy Olyphant), who immediately pins the blame on Harold and Burt when she’s immediately mangled by a passing vehicle.

As the police investigate the pair, they reveal that the general was indeed poisoned, and set forth to clear their names. The clues lead them to their old friend Valerie (Margot Robbie), who they haven’t seen since the war, when she was their nurse helping them recover from war wounds in Amsterdam.

With her help, they learn about a plot to overthrow the U.S. government and install a famous general (Robert De Niro) as dictator.

The story is based on a real conspiracy from the 1930s called the Business Plot, though the names of the real-life particulars have been changed for the purposes of this fictionalized recount.

The film offers some engaging performances and glitzy visual style, but the meatiness of the fascinating source inspiration for Russell’s screenplay is lost a bit in the breezy way it tells the story, touching on themes of racism and corporate politics for good measure.

What ends up on screen is more of a muddled conflagration of eccentric characters and a hyperkinetic obsession with the trappings of the period, coming across like the underwhelming love child of Wes Anderson and the Coen Brothers.

The lone extra on the Blu-ray is the 15-and-a-half-minute “Welcome to Amsterdam” featurette, a typical assemblage of behind-the-scenes footage and interviews with the cast and filmmakers praising each other for their skill and craftsmanship. It’s not unearned, but there’s too much unrealized potential given the level of talent involved.