Netflix subscriber growth in the United States may be slowing, but the domestic market for subscription streaming video is poised for expansion, according to new data from Ampere Analysis.

The London-based research group said growth in SVOD subscriptions in the U.S. resumed after peaking from Q3 2016 and Q1 2018.

Much of that renewed growth has come from Hulu topping 25 million subscribers earlier this year, in addition to pending service launches from Disney, Apple, WarnerMedia and NBC Universal. 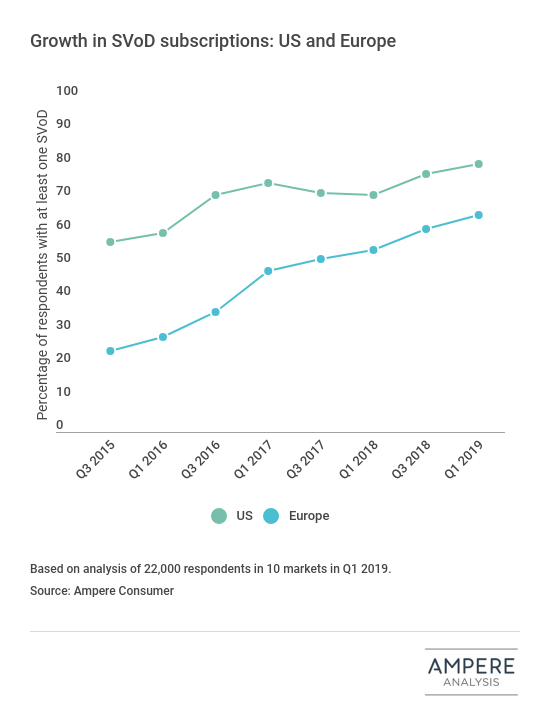 Although the proportion of Internet users in Europe who have a SVOD subscription is lower than in the U.S., there continues to be healthy sub growth across the Atlantic.

“The growth in SVOD subscribers in both regions will come as welcome news, particularly to those looking to enter the market this year such as Disney and Apple as it shows there is still room for growth and the opportunity to take a share of the revenue,” Minal Modha, consumer research lead at Ampere, said in a statement.

Indeed, about 80% of Internet users in Saudi Arabia and the U.S. have at least one SVOD subscription. Japan and France are the only countries where fewer than 50% have a subscription.

Subscriptions are being driven by younger demographics, with those under 35 over-indexing in each market except Saudi Arabia where it is driven by those aged 45 years and over.

The Netherlands and Japan are the only markets where subscriber growth has stagnated since Q3 2018.