A diverse range of content interests among consumers translates into the Nordics offering strong growth opportunities for upstart U.S. studio-led subscription video streamers, including BritBox, according to new data from Ampere Analysis.

Scandinavia, which includes Finland, Sweden, Norway, Iceland and Denmark, shows strong interest in both local and international content, a trait which, when coupled with the region being one of the most advanced OTT markets in the world, means consumers are up for adding SVOD platforms — despite Scandinavia having an average of 2.4 services per household and 14.7 million combined subscribers.

Local streamers have captured large audiences, with Viaplay being the largest local player in terms of subscriptions across all four Nordic countries in 2020. While Netflix is still the largest single SVOD player, securing 32% of the OTT market by the first half of 2020, this is still lower than Netflix’s average market share in the rest of Western Europe. Disney+ had 700,000 subscribers by the end of 2020. 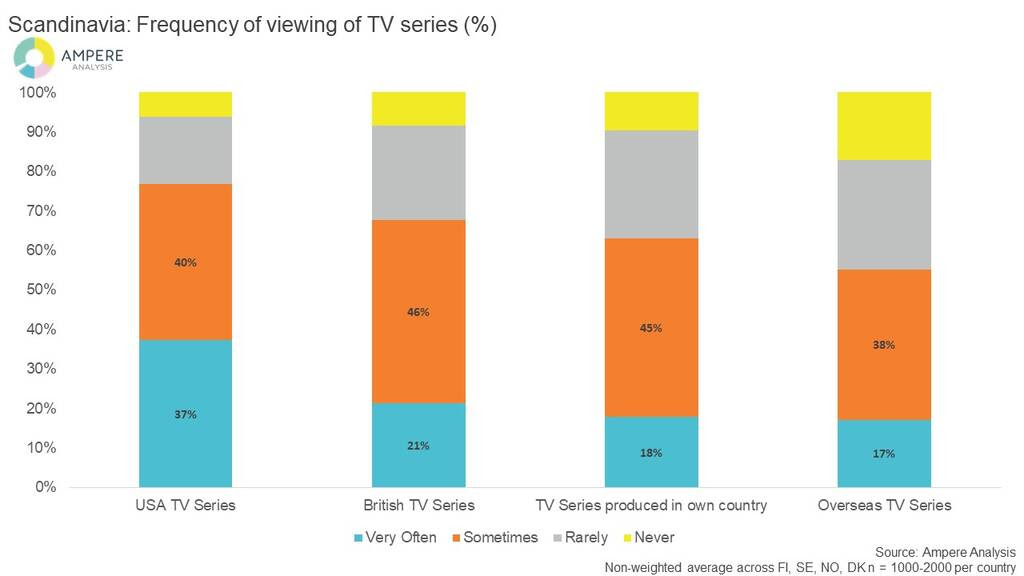 Ampere found that in a scenario where all pay-TV revenue is converted to OTT, the average household would be able to subscribe to four services in Norway and Denmark, and three services in Sweden and Finland.

“As a region where there is demand for both English language and local content, the Nordics is an attractive market for new international players to launch there while allowing local players to co-exist,” analyst Maria Dunleavey said in a statement. “Our research has found Nordics households are not yet at SVOD capacity, but as new market entrants like Paramount+ edge closer to launch, the quality of content will prove key to capturing the interest — and wallets — of Nordic consumers.”

Ampere believes the Nordics could be a region of interest for BritBox and other international players as they push ahead with international expansion. BritBox’s classic English language content is well-suited to the local audience which rates British series highly. Ampere’s Consumer media and entertainment tracker in Q3 2020 found that 21% of respondents in the Nordics watch British TV series often, compared to 14% across all markets. The Nordics also over-index for viewing American content, with 37% of respondents watching U.S. TV series frequently, compared to an average of 31% across all countries. While quality of local content still remains essential, this unusually high interest in British and U.S. series means studio-led new entrants should find favor in the region, according to Ampere.