Free access to ad-supported video-on-demand content continues to gain traction among viewers in the United States. New data from Ampere Analysis found that about 20% of domestic Internet users are accessing AVOD services such as The Roku Channel, IMDb TV, Pluto TV, Tubi and Shout! Factory TV, among others.

Based on third-quarter (ended Sept. 30) data, 17% of U.S. Internet users streamed one or more AVOD service in the prior month, up from 13% in the previous-year period. The surge in AVOD use has been spearheaded by Fox-owned Tubi, whose content catalog claims to be larger than Netflix’s.

Similarly to SVOD services such as Netflix, Amazon Prime Video, Hulu and Disney+, AVOD platforms are looking at exponential user growth and consumers migrate away from linear television. But Ampere contends the AVOD audience is older and more likely to be from lower income households than their SVOD counterpart. 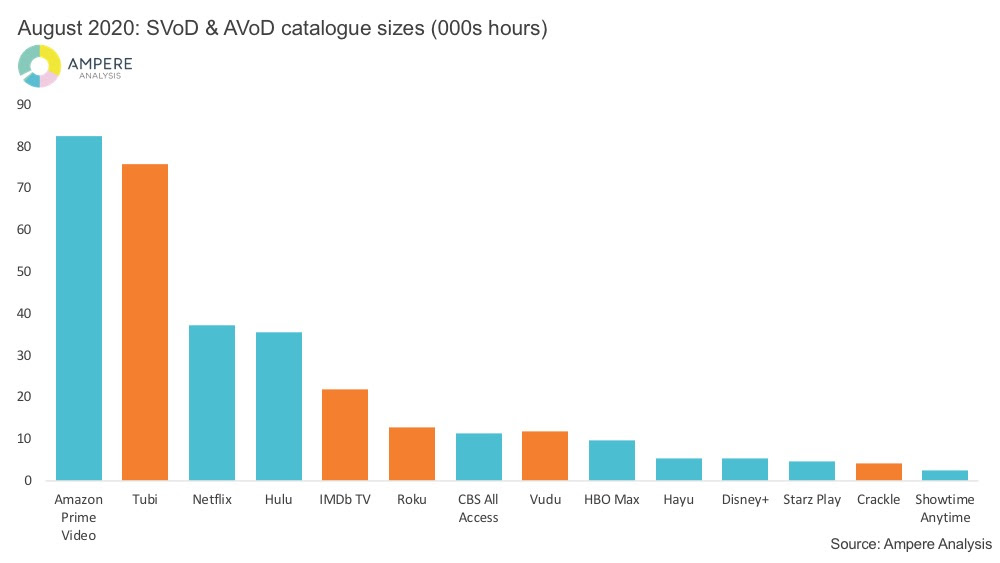 “The VOD market continues to expand and fragment, offering viewers more choice of platforms,” Minal Modha, consumer research lead at Ampere, said in a statement. “Despite some resistance to the high levels of advertising on U.S. broadcast channels, 44% of consumers still say that they don’t mind seeing ads on TV, so AVOD services are quickly filling a market position.”

The report says entertainment revenue streams have been under increased pressure in 2020 due to the coronavirus pandemic as advertisers pulled back on spending. At the same time, AVOD remains a novelty among consumers, in addition to being backed by well-funded media and technology firms. As a consequence, the research firm does not anticipate COVID-19-linked ad-demand issues will be a fundamental issue for AVOD distributors. 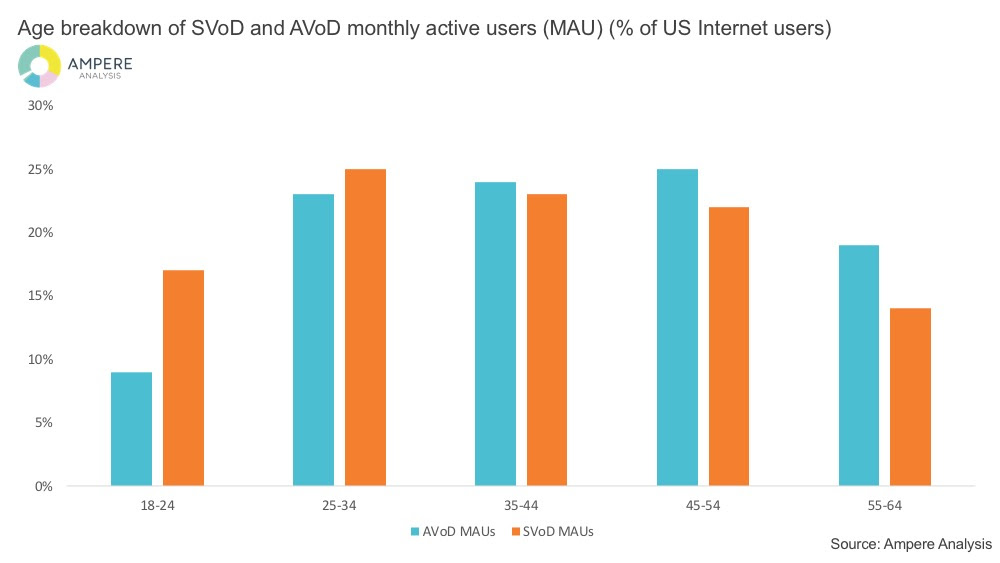 Although SVOD services in the U.S. currently have higher numbers of monthly active users than AVOD, Ampere found that in Q3 2020, nearly one in five consumers (17%) watched an AVOD service in the prior month.

Ampere says Tubi offers more than 29,000 titles, including five times as many movies as Netflix. It’s beaten only in terms of overall catalog size by Amazon Prime Video. Large catalogs are crucial for AVOD user growth as advertising revenue is highly dependent on user consumption — a contrast to SVOD, which can subsist on smaller catalog, providing key titles are sufficiently high profile.

Despite their similar content catalogs, and the growing user base on AVOD, Ampere believes the two platforms aren’t competing for the same audiences. It contends AVOD users are older than SVOD subscribers, and are more likely to be from lower income households.

“With distinct audiences, we believe that these two offerings aren’t competing directly with each other but rather can coexist,” Modha said.

She said that with ViacomCBS, WarnerMedia and NBCUniversal opting for both SVOD and AVOD platforms, in the current climate with both economic uncertainty and a greater need for people to stay at home, there is a market for both.

“We expect the use of AVOD services to continue to rise as more consumers will be turning to these platforms as they seek entertainment without increasing their financial outlay,” Modha said.