Apple TV+, Paramount+ and Netflix are the most popular SVOD platforms for U.S. consumers switching their streaming services, according to new data from Ampere Analysis.

London-based Ampere found that among subscribers who switched service within 60 days, 11% chose Apple TV+ and Paramount+, followed by Netflix. 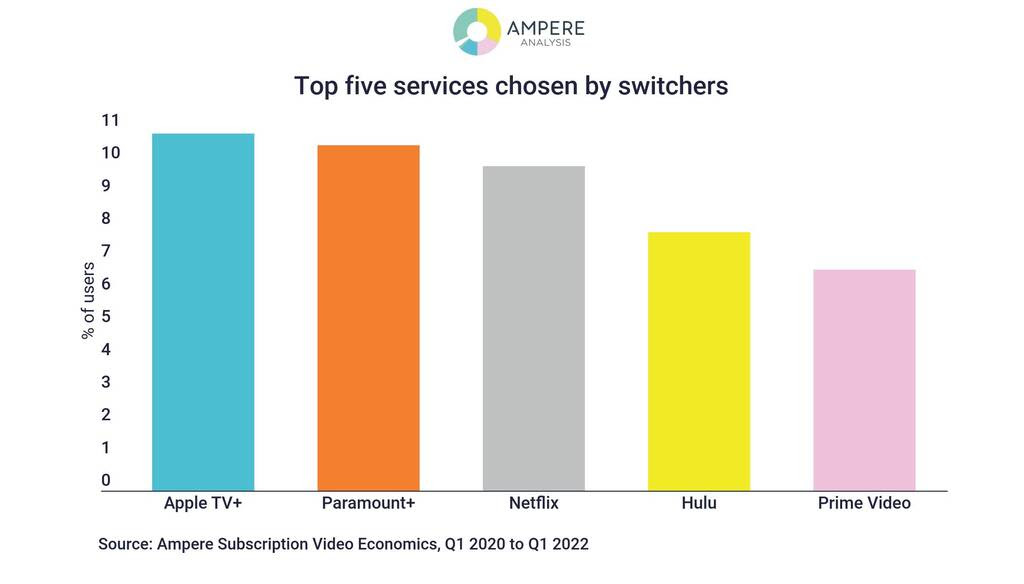 Following Netflix’s unexpected drop in net subscribers in Q1, Ampere focused on which competing platforms Netflix subs are targeting. The study, which looked at the 27-month period between Q1 2020 and Q1 2022, revealed that Apple TV+ is the first choice for Netflix deserters, followed by Amazon Prime Video and Hulu. Subs leaving Netflix have been less adventurous in trying new services than subs departing other streaming services. Departing Netflix subs currently have the lowest number of alternative streaming services among any of the major platforms. 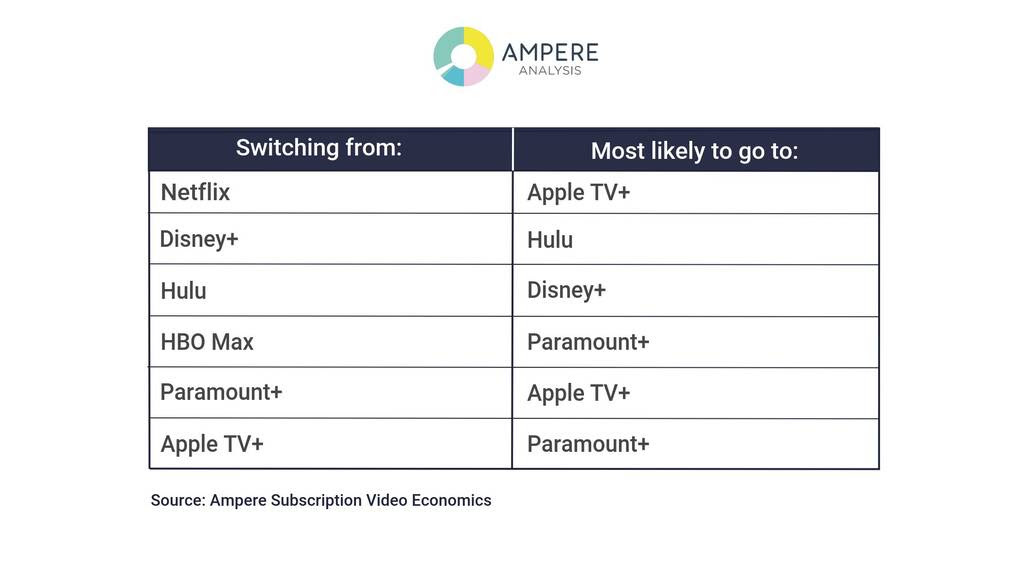 Streaming video providers offering a bundling of alternative platforms suffer the least subscriber churn, according to Ampere. The advantages are especially clear for Disney+, which offers subs a bundle with Hulu and ESPN+. The most popular next service for departing Disney+ subs is Hulu. Similarly, Hulu subs’ first choice is a Disney+ subscription.

A similar effect is also seen among Paramount+ churners. While Apple TV+ is the first choice and Netflix the second, service defectors choose Showtime (owned by Paramount) as their third choice.

Overall, around 30% of streaming subscribers switch services in any given two-month period. Of users who leave a service, just over half (56%) choose not to re-subscribe or switch to a new service within two months. However, 14% of customers leaving a platform return within two months, and this boomerang behaviour reduces effective churn rate.

Departing Netflix subs are most likely to boomerang: 23% resubscribe within two months. The comparable rates for other services are 11% for Disney+ and Hulu, 10% for Apple TV+, and 15% for both HBO Max and Paramount+.

The analysis shows that higher-spending high-stack households are engaging in ‘dipping’ — moving in and out of services higher up the stack. Smaller services are currently being taken in homes that are already avid SVOD watchers and chasing more variety. By contrast, those with only one or two streaming services are content (for now) with the major providers and tend to move between the big two or three streaming choices.