U.S. content historically has tended to dominate on SVOD platforms on the global stage, while in individual countries, local content has been strong, but that is beginning to change, according to new research from Ampere Analysis.

Ampere’s analysis reveals that English-speaking and European markets currently have the lowest appetite for internationally produced content, largely thanks to their heritage of strong local film and TV production. These countries generate a significant proportion of global pay-TV and OTT revenues, and by 2022 will be responsible for generating 71% of OTT subscription revenue and 67% of global pay-TV revenue.

Global SVOD platforms have previously chosen to focus on local content in these markets due to their scale and strong preference for locally produced titles, but preferences in these countries are starting to shift, according to Ampere, with the United States and the United Kingdom showing the biggest changes. 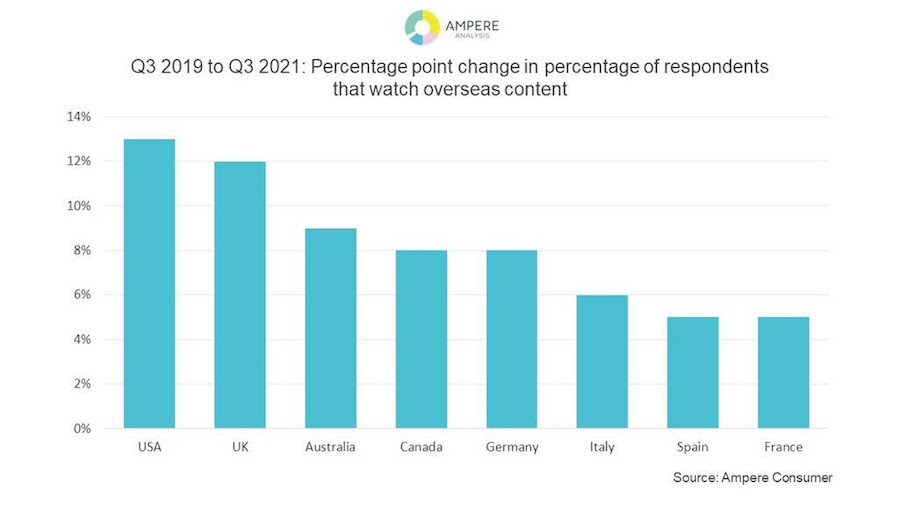 “It has been gradual, but our analysis shows that the audience for internationally-produced content is growing in the key revenue-generating English-speaking and European markets,” Rahul Patel, senior analyst at Ampere Analysis, said in a statement. “SVOD subscribers in the U.S., U.K., Australia and Canada in particular are tuning in to content produced overseas, and the major global SVOD platforms like Netflix are driving this trend by commissioning high quality non-English language titles, and by increasing the number of foreign language titles in their catalogues.

“The pandemic offered a boost to internationally produced content as production shutdowns and release delays led to locked-down viewers looking further afield for shows and movies to watch.

“As the SVOD players expand geographically and continue to make high production value titles in a multitude of global markets we expect the demand for overseas produced content to further increase.”